The largest US network carriers Delta Air Lines and United Airlines both recorded solid financial results for 2Q2013, with Delta beating its previous unit costs guidance and United predicting favourable unit revenue growth during 3Q2013. Falling oil prices resulted in some deterioration in yield strength, which reflects the correlation that energy prices have to airline pricing traction. Stressing that interrelationship, Delta is assuring that softer yields have little bearing on core demand.

Delta executed decent revenue performance and better than expected unit cost management while United admitted its costs performance is still posing challenges, but pledged to rein in some costs during 2H2013. United's unit revenue performance continues to improve after lagging behind the industry average for most of 2012.

On a GAAP basis Delta recorded 2Q2013 net income of USD685 million compared with a loss of USD168 million the year prior. Its operating revenue remained relatively flat at USD9.7 billion while operating expense fell 8% to USD8.8 billion, which helped the carrier grow operating income from USD134 million to USD914 million year-over-year during 2Q2013.

The carrier’s consolidated yields were essentially flat while unit revenues decreased 0.1%. Delta recorded the best yield performance in its domestic markets, recording a 2.5% increase year-over-year. Its Pacific and Latin American entities had the weakest performance as yields in those regions fell 2.7% and 2.3%, respectively, year-on-year during 2Q2013. 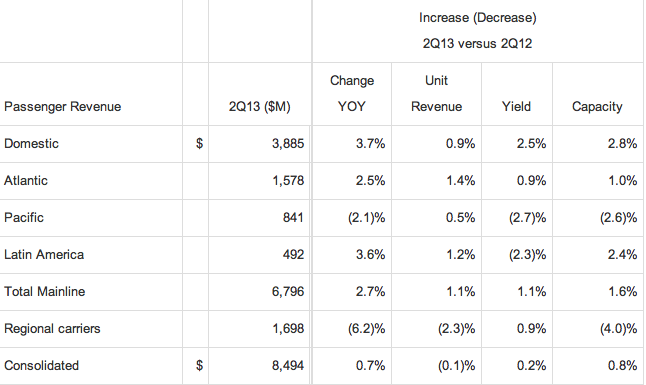 The continuing deterioration of the Japanese yen (25% according to Delta) was the main driver in Delta’s sagging Pacific performance. Carrier president Ed Bastian remarked that yen pressure negatively affected quarterly profits by USD60 million even as the carrier has some currency hedging in place. Delta has already worked to reduce capacity into Japan and Mr Bastian said that as the carrier looks towards the end of 2013 and 2014 it would take additional steps to rationalise its Japanese capacity “in light of the new economics and weaker yen”.

United also attributed its weaker performance in its Pacific markets – a 3.4% decline in unit revenues and a 4.2% fall in yields – to yen weakness and capacity increases in those markets by its competitors. Carrier chief revenue officer Jim Compton remarked that the yen’s depreciation reduced United’s top-line revenue in 2Q2013 by USD30 million and remarked that “we expect the year-over-year pressure to continue throughout the remainder of 2013”. 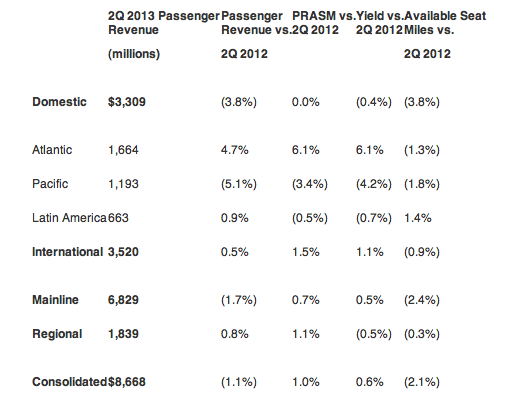 Delta was encouraged by a 4% increase in its corporate revenue during 2Q2013, and believes demand in that sector should be sustained. Banking and financial sectors turned strong performances, growing double-digit year-on-year increases, Mr Bastian explained.

United characterised its 2% growth in corporate revenue in 2Q2013 as modest. United has a unique challenge of gaining back confidence amongst its corporate customers after operational meltdowns during the high season of 2012 sent some corporate clients in search of a more reliable airline. Mr Compton remarked that United recorded strength with respect to corporate revenue in business services, computer and IT services, financial services and pharmaceuticals.

While Delta’s revenue performance remained solid during 2Q2013 its unit costs excluding fuel decreased 2.5% versus previous estimate of a 4.5% to 5.5% rise. Delta has been working to keep unit cost creep at bay through domestic fleet restructuring, maintenance cost improvements and staffing efficiency.

Top-line maintenance expense fell 14% to USD472 million during 2Q2013, which was driven by the carrier seizing on part out opportunities as its capex profile allowed Delta to acquire older aircraft and harvest them for parts for use in its aircraft overhauls, said company CFO Paul Jacobson. But a large part of the maintenance cost improvement was due to Delta’s ongoing 50-seat jet reduction. “We’re basically no longer doing any engine maintenance on 50-seat engines for the foreseeable future,” said Mr Jacobson. The real test for Delta's maintenance cost improvements will come when these adjustments no longer apply.

Delta’s highly scrutinised gamble on its purchase of the Trainer refinery failed to pay off for a third consecutive quarter as the carrier stated the facility produced a USD51 million loss during 2Q2013. Mr Jacobson attributed the loss to costs for complying with the US Environmental Protection Agency’s (EPA) renewable fuel standards, specifically price volatility of Renewable Identification Numbers (RIN).

He remarked without the higher RIN expense, Trainer would have produced a break-even result for 2Q2013. It appears unexpected external factors have hampered Trainer’s profitability since production at the site re-started under Delta’s ownership in late 2013. Delta has missed profitability and break-even target for Trainer since 4Q2012.

Delta’s management is refraining from offering a long-term view of “Trainer in isolation” said Mr Bastian, given the volatility of RINs. Proclamations by the carrier that the refinery could produce annual fuel savings of USD300 million have subsided, with Mr Bastian only remarking that Trainer has “served to be a really great hedge on our overall jet fuel costs”.

Delta’s consolidated traffic was flat on a 1% decline in capacity during 2Q2013. He also tried to assure investors that during 2H2013 United’s unit cost excluding fuel would increase 2% to 4% on a capacity decline of 0.75% to 1.75%.

Delta vice president of network planning, revenue management and marketing Glen Hauenstein reiterated the correlation between fuel prices and airline fares, noting as fuel costs declined during 2Q2013, “airline tickets on the margin go down a bit”. However, he stressed that correlation is just an inherent element of the airline business, and said the small declines in yields should not sound alarms for yield deterioration in the long term.

Delta and United each have their own unique challenges as they work to prove the US airline's business model is on a path to continued stability. Yield uncertainty, revenue drops in the Pacific and a cost environment that offers some concern, among others do suggest it will not be all plain sailing over coming months.

It is encouraging though that each carrier is posting overall positive top-line results while attempting to clean up their respective balance sheets and look for ways to further reward shareholders – as in Delta’s case.

United is also working to create lasting value for its patient investors, but with some outstanding merger issues still lingering its shareholders may need to wait a bit longer to see some return on their investments.