Delta Air Lines says it is confident of meeting its stated goal of reversing negative fortunes at its Trainer refinery in 2014 after losing approximately USD100 million at the facility during 2013, having bought it for USD180 million in 2012, including a USD30 million subsidy from the Pennsylvania state government. Throughout 2013 the carrier’s excitement over Trainer’s prospects subsided as numerous production challenges and the realities of running a different business slowly set in.

Fuelling the carrier’s confidence of achieving profits at Trainer during 2014 is an expansion of the amount of less expensive Bakken crude processed at the facility. During the last year the carrier has put contracts into place that allow it to increase the number of of Bakken barrels its processes per day at the plant.

Even as Delta believes it has overcome some of the more prominent growing pains of purchasing and running an oil refinery, a single year of profitability does not guarantee long-term success for the endeavour. The carrier has made similar declarations regarding Trainer in the past, so there is room for scepticism as to whether purchasing the refinery was a sound investment. Other airlines have not been quick to follow the precedent.

Delta tabled its plans to purchase the Trainer refinery in 2012 as a means to beat back stubborn crack spreads (the gap between the cost of crude oil and the price of jet fuel) that grew from 10% in 2009 73% during 2012. The acquisition was highly popular with the Pennsylvania state government, which stated at the time that Delta's move would save 5,000 jobs in the region.

Just as Delta was restarting production at the facility just outside Philadelphia, that was previously owned by Phillips 66, super storm “Sandy” struck the US east coast in Oct-2012, disrupting production at Trainer, and it took some time to recover from the storm’s effects. During 1Q2013 Trainer was still running at 75% capacity. As a result losses at Trainer reached USD136 million before the facility produced a modest USD3 million profit during 3Q2013.

During Mar-2013 as efforts to restore Trainer to full capacity were under way, Delta president Ed Bastian reflected on the teething pains the carrier had experienced with Trainer, noting that “Running an oil refinery, much like running an airline, is not for the faint of heart.”

Much of Delta’s commentary about Trainer’s prospects since its acquisition of the refinery has centered on sourcing lower-cost Bakken crude from North Dakota. The refinery accepted its first shipment of Bakken during 1Q2013, and previously Delta has remarked that it aimed to refine 75,000 to 100,000 barrels of Bakken per day.

Delta CEO Richard Anderson remains bullish on the prospects of lower-cost Bakken. During the airline’s recent investor day he concluded the “Bakken play is enormous for this industry and for the transportation industry, we have a glut of crude in the US, and more and more of it is going to end up being priced toward WTI.”

In the simplest terms, the infrastructure to transport Bakken to US east coast refineries has been lacking, which resulted in those facilities sourcing higher priced Brent crude, largely produced in the North Sea. There has been some improvement in transporting Bakken from North Dakota, aided by rail and pipeline infrastructure.

Delta president Ed Bastian, joining Mr Anderson, says the company has contracts in place to supply roughly 70,000 barrels per day of domestic crude to Trainer, mainly from the Bakken formation, but also from Eagle Ford in South Texas and the Permian Basin located in Texas and New Mexico. Trainer’s daily output is roughly 185,000 barrels.

Bakken’s prices are generally aligned with West Texas Intermediate (WTI0, and in Mar-2013, they converged at under USD100 per barrel. At that time Brent prices were roughly USD110 per barrel. 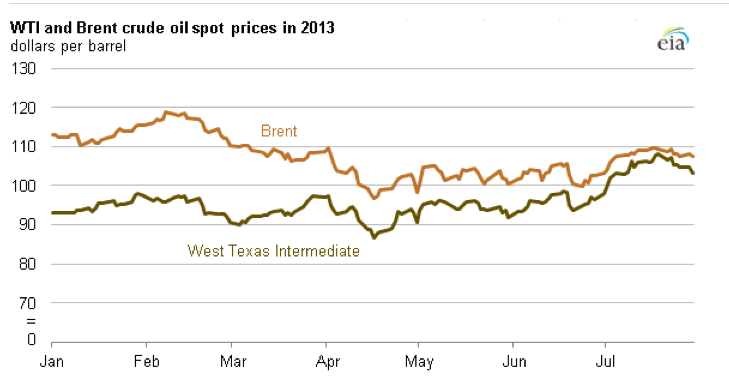 Mr Bastian estimates that the increase in domestic crude processed at Trainer would lower the average cost per barrel of oil processed at the refinery by USD2 to USD3. “When you think that we’ve processed 180,000 barrels a day, 365 times a year, times USD2 to USD3 you can do the math pretty easily and see it’s a material sum of money, an opportunity yet to be attained in our run rates.”

While Bakken appears to have significant upside for Trainer, some risks in pricing volatility remains. The US Energy Information Administration has estimated that total takeway capacity from the Williston Basin, which is part of the Bakken formation, grew from 678,000 barrels per day at YE2011 to 1.1 million in 2012. Rail represented the bulk of the expansion, rising from 265,000 barrels pre day in 2011 to 660,000 in Dec-2012.

The Administration concluded as projects to increase pipeline capacity to 650,000 barrels per day and rail capacity to 900,000, “takeaway capacity from the Bakken could possibly exceed growth. With crude oil transportation and production expected to expand in the region, the price differential between WTI and Bakken crude could remain volatile”.

Another element underlying Delta’s confidence in Trainer’s profitability during 2014 is the changing dynamics between jet fuel prices diesel. Mr Bastian explained that jet fuel historically has traded at a USD0.02 to USD0.03 premium to diesel.

But during 2013, due to the effect of Trainer in the market place, jet fuel has traded between as USD0.05 and USD0.10 per gallon discount to diesel. Initially, Delta planned for jet fuel to represent 32% of Trainer’s output.

Delta's planned capacity for Trainer as of 2012 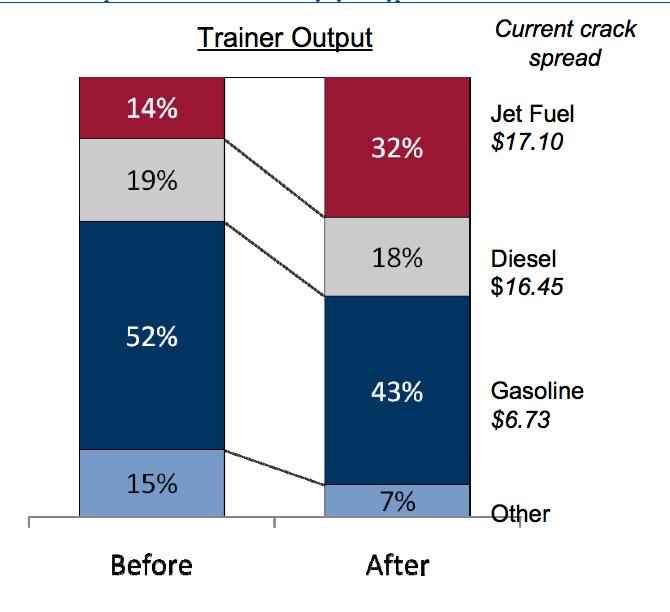 Mr Bastian asserts that every penny Delta saves on fuel saves the carrier USD40 million per year. “When you do the math, it’s considerable and it is well worth the USD150 million capital investment that we’ve made in this refinery.” Part of the arrangement was that Delta would also invest another USD100 million to convert the refinery's operations to a higher proportion of jet fuel production.

With the original expectations tempered by reality and perhaps some of teething pains subsiding, Delta has publicly never wavered in its decision to branch out by purchasing and running an oil refinery. As Mr Bastian declared: “Let me be very clear. Trainer has been a great success for Delta. And we are pleased we made the acquisition.”

It is certainly a matter of definition at least as to whether Trainer can be deemed a success so far. But with Delta’s financial performance clearly outpacing its US legacy peers and other carriers, perhaps the airline can be afforded some leeway in the initial miscues it made in restarting production at the Trainer refinery.

However, at some point Delta needs to start delivering on its promises for Trainer after missing initial financial targets it had supplied for the facility. Exuding confidence is relatively simple and straightforward, but executing on promises of profitability is an entirely different scenario. Delta has deftly executed on its efforts to sustain profits in the airline business.

Now Delta is itself making 2014 a pivotal year for its foray into oil refining.

Delta's plan for a turnaround at Trainer during 2014