Shares in Delta Air Lines fell 4.6% on Wednesday, as US airline shares spent another day in decline. Latin American stocks were also lower, as Copa dropped 3.3% and TAM slipped 2.7%. The only significant positive trading was in WestJet, which rose 3.6%.

Air Canada and TACA announced they have filed a joint application with the US Department of Transportation seeking permission to codeshare between Central America and Canada. Air Canada already codeshares with Avianca.

GOL received a notice from its shareholder, AllianceBernstein LP and affiliate AXA Investment Managers, stating that clients under their administration disposed of 7.7 million preferred shares issued by the carrier. This represents 5.76% of all shares of such class, thus reducing their holding to 1.07 million preferred shares, corresponding to 0.807% of all shares of the class.

American Airlines announced it has completed the sale of USD1 billion in debt with collateral including routes between the US and Tokyo. The carrier sold the senior secured notes, which carry 7.5% interest and mature in 2016, to institutions and foreign investors. 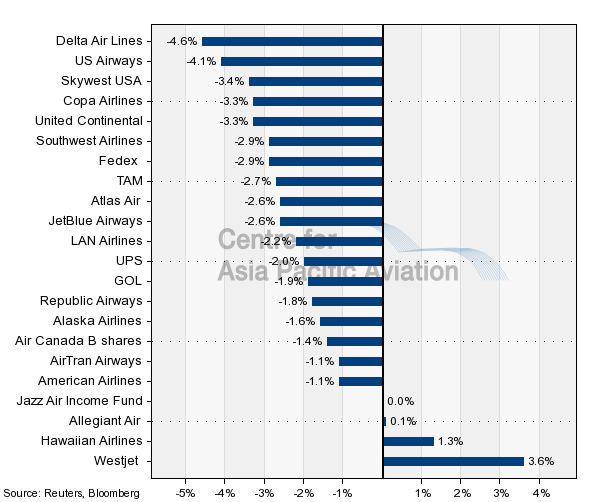