Slots at Chinese airports cannot be openly swapped the way they can at other airports – such as at London Heathrow where slot trading over the past year has occurred between Jet Airways and Etihad, Cathay Pacific and Air New Zealand, Qantas and British Airways, Delta and unnamed partners and perhaps soon Aer Lingus and British Airways. This has become problematic for carriers like Delta, which are given late arrival times and early departures that stymie critical connecting traffic.

But Delta in recent months has been able to leverage its partnerships with fellow SkyTeam carriers China Eastern and China Southern to adjust their slot portfolio to maximise connections, which benefit both parties. Delta has been able to move its Detroit-Beijing/Shanghai Pudong services to arrive in the afternoon and depart in the evening, key times for foreign long-haul carriers. While this improves Delta's position in China – the smallest of the three US carriers present – its ability to tap into new cities appears limited owing to fleet limitations.

Delta's China operation focuses on just Shanghai Pudong and Beijing Capital. Delta serves both cities with non-stop flights to the US as well as fifth freedom flights from its Asian hub at Tokyo Narita.

Tokyo-Shanghai in 2013 typically sees a widebody (varying over the past few months from A330 to 747-400 to 767-300) while Tokyo-Beijing sees 767-300s and 757-200s. Those services are timed to facilitate transfer traffic to the US, so they leave Tokyo in the evening after trans-Pacific flights arrive, and then depart Shanghai and Beijing the following morning to connect with afternoon departures out of Tokyo. The need for those flights to connect with trans-Pacific services limits scheduling freedom, and as a result limits convenient domestic Chinese connections as the flights arrive in China (22:05 in Beijing and 21:45 in Shanghai) after most of the day's domestic services have departed and then depart China (around 08:30 from Beijing and 09:05 from Shanghai) before there are many domestic arrivals.

The first major wave of domestic services does not arrive into Beijing until after 09:00 while departures taper off after 22:00. 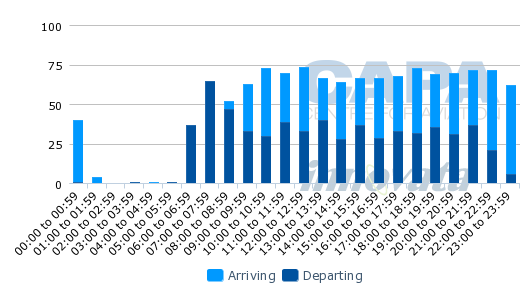 That pattern is similar at Shanghai Pudong. 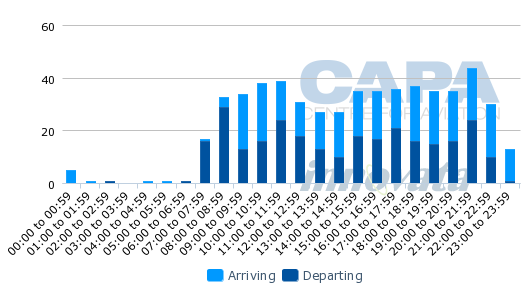 Delta's trans-Pacific services had very poor slot times, not because of the need to feed a hub but rather slots were almost completely utilised by the time Delta (or merger partner Northwest) recommenced services around the late 2000s. Northwest had served non-stop US-China routes until the early 2000s but then relied on services via Tokyo. United Airlines had relied on its Tokyo hub before converting flights to non-stops in the early 2000s, when convenient slots were easier to obtain. While United commenced non-stop services after Northwest, it did not suspend them. 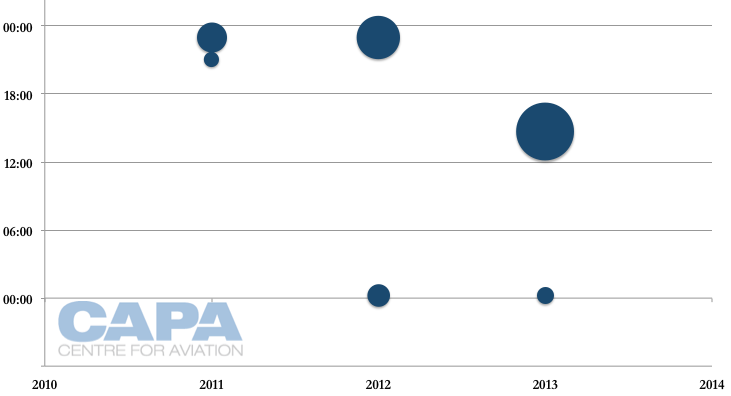 Detroit-Shanghai Pudong (initially operated under Northwest) arrived into Shanghai between 18:10 and 19:35 from its commencement in 2009 until late 2012, when it secured a 16:00 arrival time from the end of Oct-2012 and then in Feb-2013 a 14:50 arrival time. This earlier arrival time also facilitates far better connections, although the Beijing arrival time change was more marked due to its previously later time, a result of the service starting in 2011 when slots were far harder to obtain than when Detroit-Shanghai commenced in 2009. 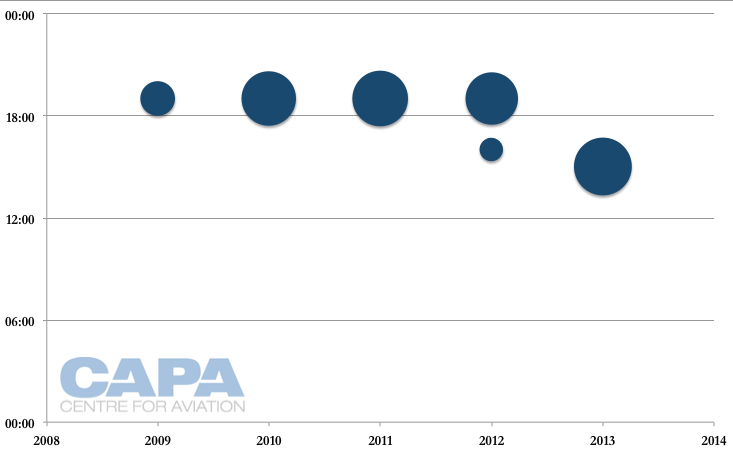 Departures from China also saw significant improvements. Beijing-Detroit departed between 06:40 and 07:25 until early 2013, when it moved to a 16:50/17:50 departure time. The previous almost midnight arrival into Beijing and early morning departure made domestic connections very difficult if not impossible. The new afternoon/evening departure ensures Delta has almost a full day's worth of connections. 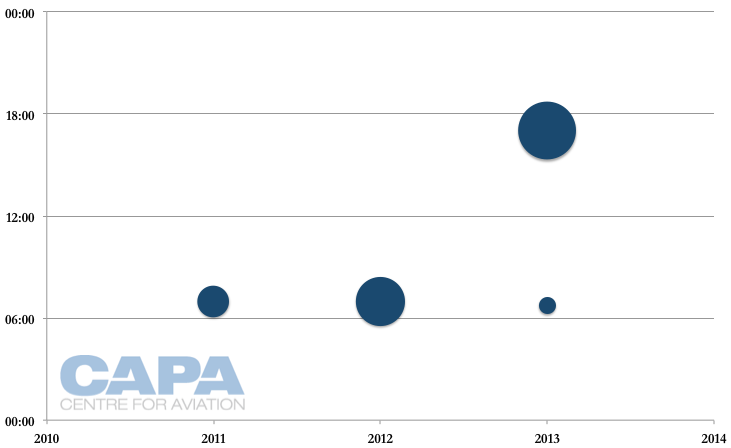 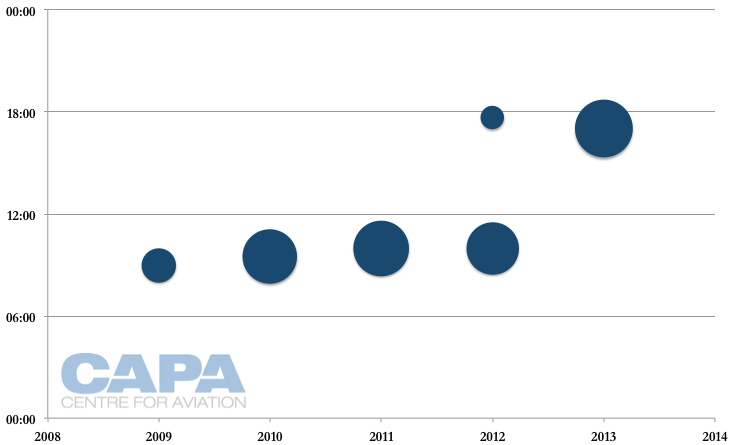 The allocation of slots at Chinese airports is a complicated and non-transparent process subject to heavy lobbying. Delta obviously benefitted from the close relationships China Eastern and China Southern have at the airports. Although the two are state-owned, factions in each region/city do not necessarily mean political connections help in that area. 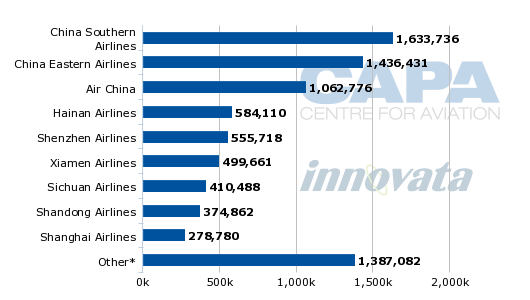 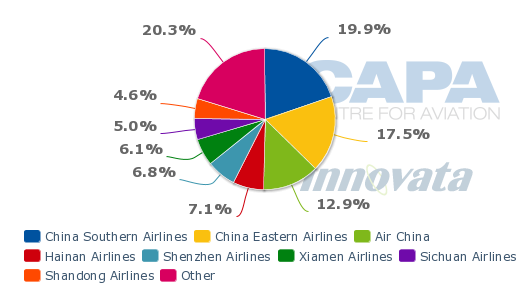 China Eastern and China Southern would also have been helped in their case since better slots for Delta afford them greater connecting opportunities. Delta's codeshares with China Eastern and China Southern are extensive, including on trans-Pacific services (Delta is already codesharing on China Eastern's Shanghai-San Francisco service that re-commenced service in Apr-2013) as well as beyond gateway flights, critical to both carriers to feed flights.

Besides the connecting opportunities, placing passengers on Delta services could be more viable than China Eastern or China Southern's own flights. Long-haul flights are generally loss making for Chinese carriers, although China Eastern is seeing some improvement in North America, where 2012 losses declined by about RMB100 million (USD16 million).

Despite losses, China Eastern is bullish on trans-Pacific growth, planning to bring its New York JFK and Los Angeles services to double daily once 777-300ERs arrive. China Southern is still adjusting to significant capacity increase on its sole US passenger service, Guangzhou-Los Angeles, after up-gauging it from a 777-200ER to A380 in Oct-2012.

Further North American expansion for China Southern is possible with forthcoming 787s and 777-300ERs, although China Southern is disadvantaged being based in the lower-yielding city of Guangzhou. Its attempts to open long-haul services from Beijing on the A380 has become a drawn out affair.

Delta's on and off again Atlanta-Shanghai Pudong service (currently suspended) had favourable slots and the forthcoming Seattle-Shanghai service has favourable timings. But Seattle-Beijing arrives around 23:00, too late for domestic connections, and departs late the following morning.

The new Seattle-Shanghai route will launch on 16-Jun-2013 as part of Delta’s increased focus on trans-Pacific flights from Seattle in partnership with Seattle-based Alaska Airlines. The 767-300ER being used for the flight has 18 hours on the ground in Shanghai, which is not ideal for utilisation. But the flight timing is ideal for connections on both ends.

While there is a decent amount of local demand for Seattle-Shanghai services, the route would not be viable for Delta, which does not have a hub in Seattle, without close partnerships on both ends. Delta will be the only carrier operating non-stop flights between Seattle and Shanghai.

Delta's slots in Beijing and Shanghai may have been un-ideal, but the situation was far better than what American encountered for its Beijing-Chicago service.

As CAPA previously wrote in a report on Hainan's entry on the Beijing-Chicago service:

The lack of convenient slots at Beijing is outside of American Airlines’ control, but it has affected the carrier’s performance on the Beijing-Chicago route. In American’s first 20 months on the route, it has had a lower load factor than United Airlines in all but one month when it recorded a load factor less than 1ppt higher. Its average load factor in 2011 was 73% compared to 87% at United.

American's load factors were initially as high as they were at the start of services in May-2010 because American had sold the service with "placeholder" afternoon arrival and departure slots at Beijing, believing it would be able to attain those slots. Instead American received late night and early morning slots, and as this situation became evident – and public – load factors dipped. In a rare occurrence, American's Beijing-Chicago load factor has, through the end of 2011, yet to surpass the first two months of operations. Typically launch months see the lowest load factors.

The lack of ideally timed slots has been a major frustration of American Airlines. The carrier cancelled its first planned Chicago-Beijing launch in Apr-2010 mere hours before the flight was due to depart. Beijing had initially given American a 02:20 arrival slot and 04:20 departure slot, but American believed it could secure more favourable slots and so scheduled its service with "placeholder" slots entailing a 13:55 Beijing arrival and 16:55 departure, according to local reports at the time. The original Beijing slots would have entailed departing Chicago at midnight and arriving back at 04:00.

American had been negotiating with authorities up until 05:00 on the day of the planned inaugural. The midnight hours slots "are inconsistent with local market demand and would complicate flight connections for passengers in Beijing and Chicago," a spokesman said at the time.

American said it expected to receive "preferential treatment" as a new entrant carrier in line with "established International Air Transport Association and industry guidelines and procedures". But as the situation at other airlines has shown, Beijing's congestion issue is not negotiable, at least until a new airport opens later this decade. The service was postponed again on 04-May-2010 before finally launching on 25-May-2010 when American received evening landing slots and morning departure slots.

Delta's switch of Beijing slots places it clearly ahead of American in scheduling convenience and adds further pressure for American to obtain better slots in Beijing. American still has a 23:30 arrival time in Beijing and 06:55/07:55 arrival time.

American could look to partner Hainan Airlines, which is the fourth largest carrier at Beijing with 961 weekly movements. But Hainan is in less of a position to move slots owing to its smaller status (China Eastern and China Southern have around 1,500-1,600 weekly movements), and ownership structure as a private carrier that makes it more difficult to obtain lasting relationships with government officials.

American had better slots than Delta in Shanghai and the two now have similar schedules to their respective hubs of Chicago and Detroit. American's Los Angeles-Shanghai services arrives at 19:25 and departs at 21:35, not completely ideal but not on the level of its Beijing slots or Delta's old slots.

While Delta has caught up to US-China market leader United by having suitable slots, United – in addition to its capacity advantage – will leapfrog competitors as it prepares to launch service from the US to secondary cities in China, reducing the number of connections required. 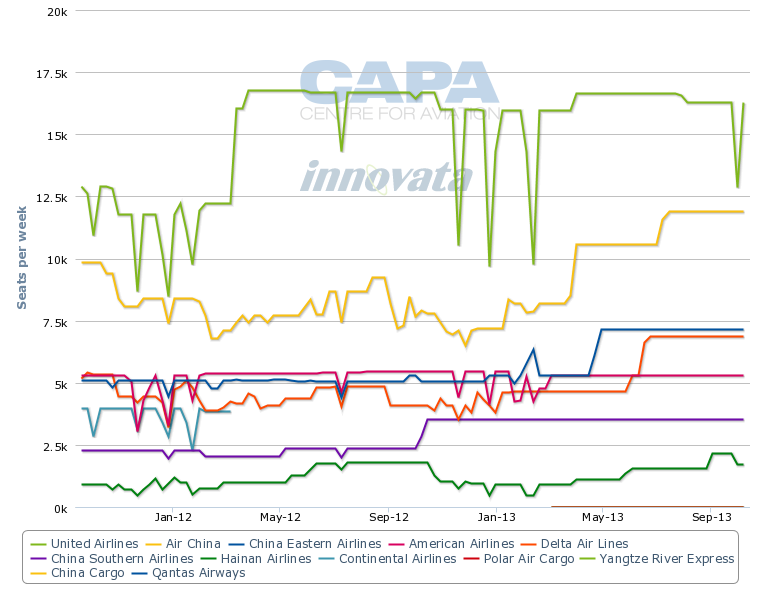 European and Middle Eastern carriers are slowly opening services to China's secondary cities that may be overshadowed by Beijing and Shanghai but still boast of populations well into the millions. Now United Airlines looks set to be the first North American carrier to introduce non-stop service to secondary cities, with CEO Jeff Smisek telling local media that its Boeing 787s will open cities like Chengdu, Chongqing, Xi'an and Wuhan.

Such services will bring the China-North America market to a new stage of development, critical since from the Chinese perspective it is expected to be the healthiest and most stable long-haul market. Yet the balance for the long-term will be weighted towards US carriers, which not only will have a larger domestic market than China for at least a decade, but also have regional traffic around Latin America to feed to long-haul routes, whereas Chinese carriers' regional traffic around Asia is more hotly contested.

American also is slated to begin receiving in 2014 787s, which it could use to open more points in China. Delta's widebody fleet is not planned to see growth until 2020 when 787s arrive. Delta deferred Northwest's 787 order, and while Delta has been smart in refurbishing and re-deploying smaller aircraft like the 767-300 to Asia, Northwest had been a leader in Asia (unusual for US carriers at the time) and its vision for the 787 in Asia was clear.

Even if Delta is able to move aircraft around, range to secondary cities becomes an issue as they are typically further than Beijing or Shanghai. Using a larger aircraft may give Delta the range but also too much capacity and operating costs compared to an aircraft like the 787. While Delta has partners, relying on Beijing and Shanghai precludes some opportunities and adds stops elsewhere.

Delta also has a SkyTeam partner in Korean Air, which has the largest amount of Chinese capacity into China by a foreign carrier after Cathay Pacific's Dragonair. But China's general prohibition on third-country codeshares (critical in the GDS) as well as Delta's simple relationship with Korean Air make a development here uncertain. Delta would have to balance a Korean Air partnership with China Eastern and China Southern, whose strength is clear in the help Delta received with slots.

Having partners, as Delta has found, is critical. But as Delta may increasingly discover, managing them and their own business intentions is difficult.