Curaçao Hato International airport is benefitting from the country’s steady increase in tourism numbers, which is driving expanded service from the New York market, Colombia and direct flights to Trinidad.

The country’s tourism body has calculated that tourism generated USD132.7 million for Curaçao’s local economy during the first two months of 2019, which was a 10% increase year-on-year. Approximately 46% of that total is generated by visitors from Europe.

Data from CAPA and OAG show that as of late Aug-2019 Curaçao has service to 17 nonstop destinations: two in Europe, four in North America and 11 within Latin America. Curaçao's is the second largest air service market among the “ABC” islands – Aruba, Bonaire and Curaçao.

The airport has also weathered the challenges faced by InselAir that ultimately led to the airline ceasing operations. It appears that some operators are working to fill that void, including the start-up JetAir Caribbean, which is working to gain certification from Curaçao’s aviation authorities. There was little doubt that airlines would work to fill the void left by InselAir, given Curaçao’s solidly growing tourism numbers.

Curaçao’s Hospitality & Tourism Association (CHATA) has reported that the country’s hotel occupancy reached 77.8% in 2018, which was a 5.8ppt increase from the year prior. Average daily rates grew from USD80.61 to USD90.74 and revenue per available room (RevPAR) increased by US13.25, to USD128.70.

The country’s tourism body has calculated that tourism generated USD132.7 million for Curaçao’s local economy during the first two months of 2019, which was a 10% increase year-on-year. Approximately 46% of that total is generated by visitors from Europe (Curaçao is located in the Dutch Caribbean).

Overnight visitors to Curaçao grew by 10% year-on-year for the first two months of 2019, with overnight visits from Europe increasing 9%.

Airbnb is also a growing and important component of Curaçao’s tourism industry.

In early 2019 Curaçao and Airbnb renewed an agreement to promote the country as a leading tourism destination. During 2018 Airbnb hosts in Curaçao welcomed 23,000 guests, with an average trip length of eight days, which according to the Curaçao Tourism Development Foundation was significantly longer than the average stay in other places throughout the Caribbean. There are more than 1,900 Airbnb listings in Curaçao.

The tourism development body has noted that more than 950 Airbnb hosts in Curaçao benefit from the economic benefits that Airbnb provides through home sharing.

Curaçao’s healthy tourism industry is beneficial to Hato International airport, which recently welcomed new services to Bogotá from the Colombian LCC Wingo, joining Avianca on the pairing. Visitors from Colombia to Curaçao have jumped 38% year-on-year, and Wingo’s two flights bring the total between Curaçao and Colombia’s capital to 13.

United plans to add flights from its Newark hub to Curaçao in late 2019. The island is the airline’s 21st destination in the Caribbean and will result in United serving all of the “ABC” islands – Aruba, Bonaire and Curaçao.

Within the Caribbean, Curaçao has added new services of two weekly flights to Port of Spain, Trinidad and Tobago.

From Europe, Condor is operating seasonal flights between Curaçao and Frankfurt. Air Canada is also increasing its seasonal frequencies from Toronto to Curaçao in late 2019 – from three weekly to four.

Data from CAPA and OAG show that as of late Aug-2019 Curaçao has service to 17 nonstop destinations: two in Europe, four in North America and 11 within Latin America.

Curaçao's is the second largest air service market among the “ABC” islands – Aruba, Bonaire and Curaçao. Aruba has 28 non-stop destinations and Bonaire has six.

On a system-wide basis KLM, with a 48.3% share, is Curaçao’s largest airlines based on ASK deployment, followed by TUI Airlines Netherlands with a 27% share, and American Airlines with a 10% share. The Netherlands represented 37.9% of Curaçao’s departing seats as of late Aug-2019, followed by the United States (16.6%) and Aruba (13%). 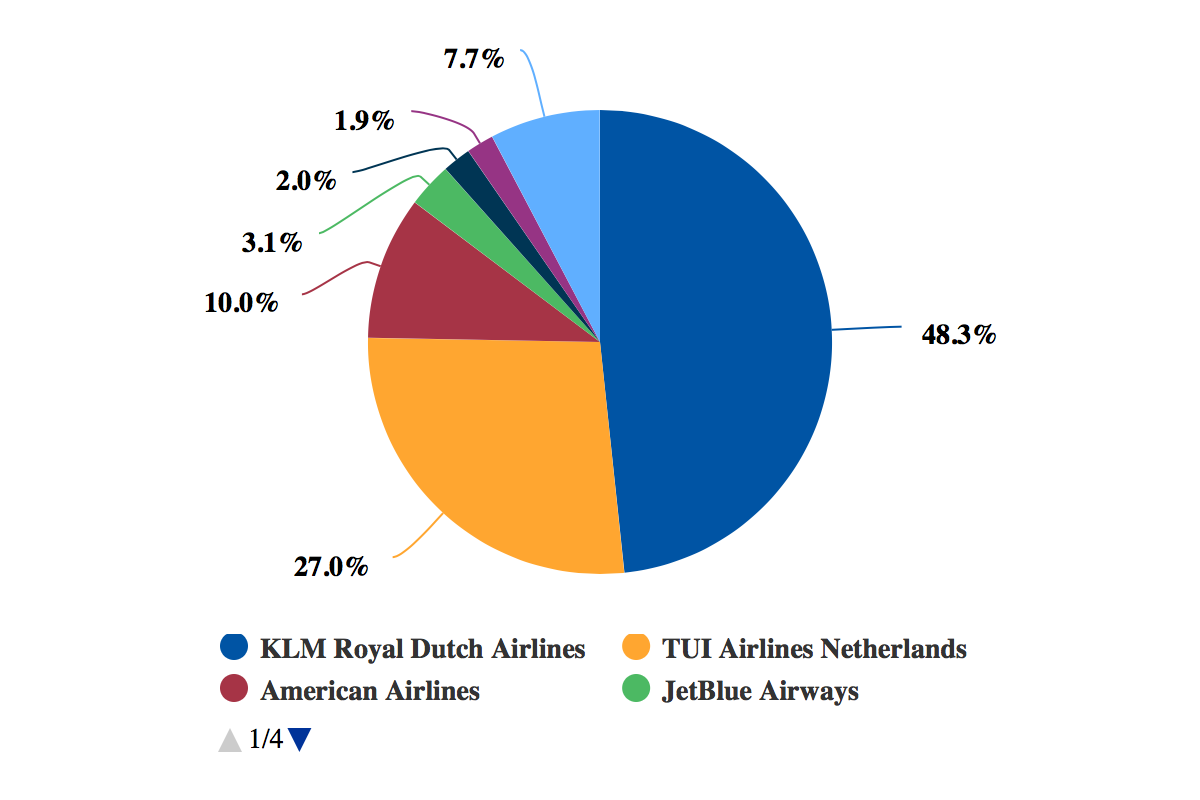 In Feb-2019 InselAir, with hubs in Curaçao and Aruba, ceased operations after being badly affected by an inability to regain millions of passengers trapped in Venezuela, which was a key market for the airline. In late 2016, InselAir had a fleet of 19 aircraft before its mounting financial challenges.

See related report: InselAir: opportunities for the airline’s niche are ripe if the airline commits to an expanded fleet

At one point InterCaribbean was working to take a 49% stake in InselAir, but those plans ultimately never materialised and InselAir went out of business.

Curaçao-based Divi Divi Air and Winnair have been working to backfill the void created by InselAir’s market exit, particularly on regional routes within the Caribbean. Those three airlines are Hato’s three largest airlines represented by weekly system departing frequencies. 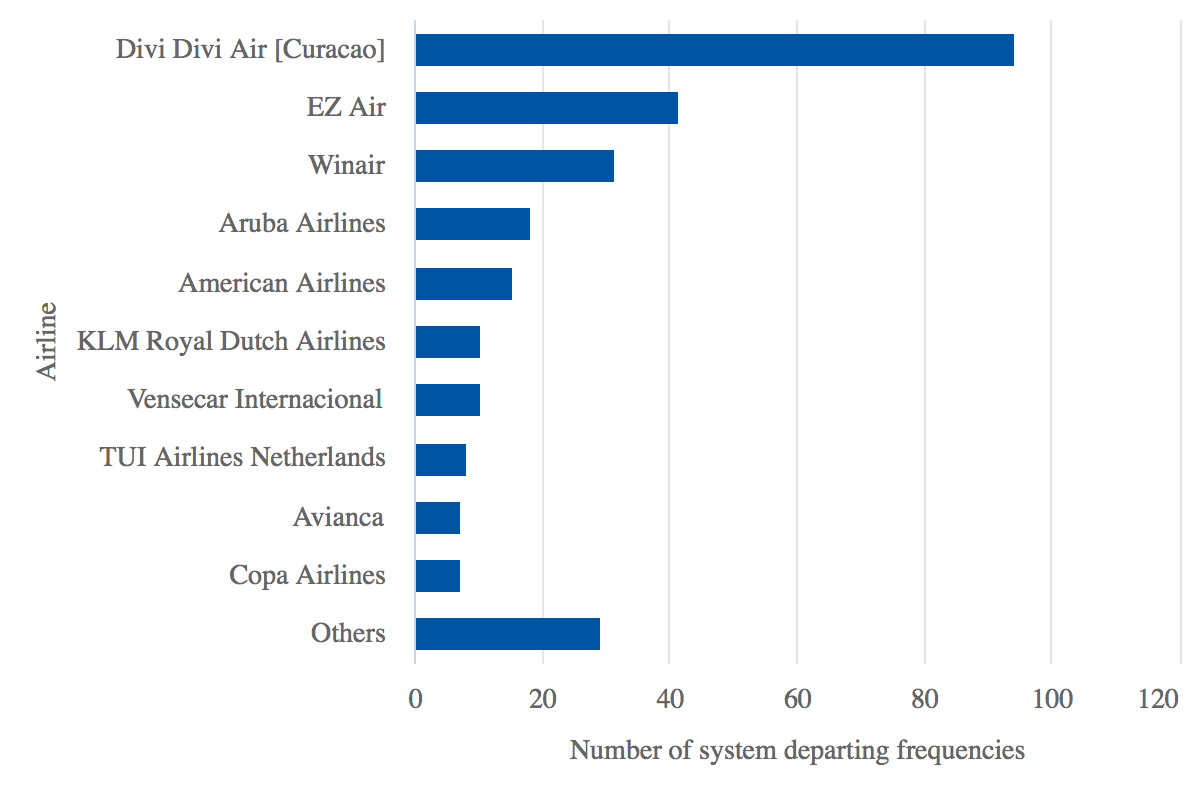 Winnair in particular has increased its schedule, adding frequencies to Aruba, Bonaire, Port au Prince and Santo Domingo, according to Routes Online.

JetAir Caribbean is currently working to obtain approval for operations from Curaçao’s government. According to the Curaçao Chronicle, the airline is working to operate several, but not all, of InselAir’s routes. InselAir was the sole operator on several of its routes before terminating operations.

JetAir Caribbean is launching operations with a Fokker 70 previously operated by KLM City Hopper, the publication has reported. The airline is operating under the licence of United Caribbean Airlines.

There was little doubt that airlines would work to fill the void left by InselAir, given Curaçao’s solidly growing tourism numbers.

Curaçao Hato International airport’s prospects continue to look positive, especially as airlines gear up to bolster their seasonal service to the island in late 2019. Additionally, the country’s tourism and hotel industries remain on a solid footing and Airbnb is also growing in the market.

All of those elements bode well for Hato International as the airport continues its work to grow its network footprint.