Cologne/Bonn ranks only among Germany's mid-sized airports. Its traffic suffered in the global financial crisis and did not recover its pre-crisis level until 2015. It is not a major hub and barely has a long haul network. Nevertheless, it provides much of interest to students of Europe's airline industry.

Cologne/Bonn is now one of Germany's fastest-growing airports, with this expansion stimulated by Europe's lowest cost airline, Ryanair. The Irish LCC chose Cologne/Bonn to launch its re-entry into the German domestic market in 2015. The airport is also the biggest base for the Lufthansa Group's low cost brands (whether Germanwings or Eurowings) and the first base for its low cost long haul operation (under the Eurowings brand). Meanwhile, long haul connections to Asia Pacific are increasing with the growth at Cologne/Bonn of super connector Turkish Airlines.

Size is most certainly not everything.

Cologne/Bonn was Germany's seventh biggest airport by passenger numbers in 2015, when it handled a total of 10.3 million, just less than sixth ranked Stuttgart's 10.5 million. Among the seven German airports with more than 10 million passengers in 2015, Cologne/Bonn enjoyed the fastest growth, with an increase of 9.5% over 2014.

The airport ranked just behind Cologne/Bonn on 2015 passenger numbers was Berlin Schönefeld, whose 16.9% increase in passenger numbers made it the fastest growing airport in Germany's top 10. The two are the most important German airports for LCC capacity.

However, Cologne/Bonn has a more seasonal pattern of capacity fluctuations and will have 5% more LCC seats than will Schönefeld in the week of 27-Jun-2016, making it Germany's biggest LCC airport in the summer 2016 schedule.

The LCC presence at Cologne/Bonn is mainly due to Germanwings/Eurowings and Ryanair (see below), but also includes Pegasus Airlines, Wizz Air, TUIfly, easyJet, Blue Air and Air Arabia Maroc. In Feb-2016, Cologne/Bonn became the first international destination for Russia's only LCC, the Aeroflot subsidiary Pobeda, which has launched a daily service from Moscow Vnukovo (this is also now Cologne/Bonn's only destination in Russia).

Cologne/Bonn's 2015 traffic was back to pre-crisis levels 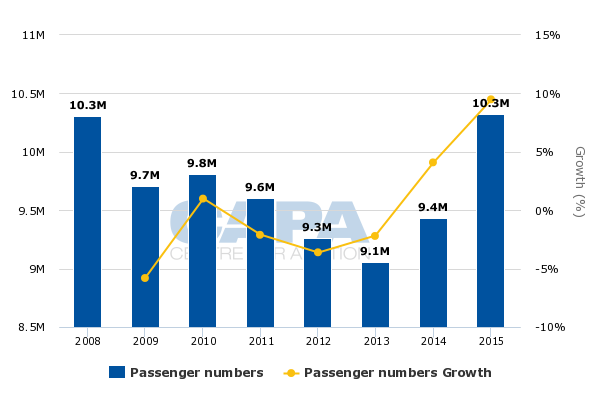 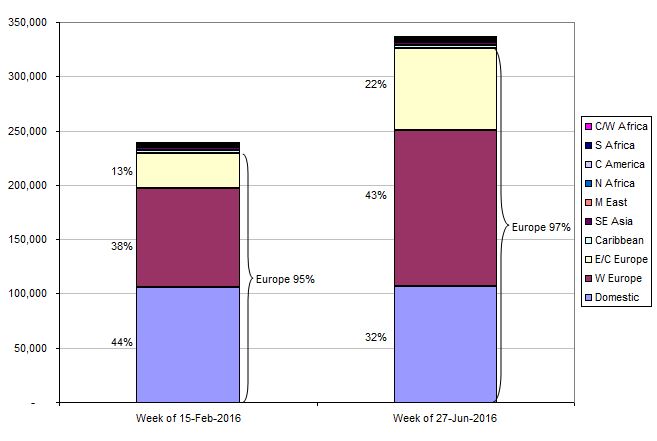 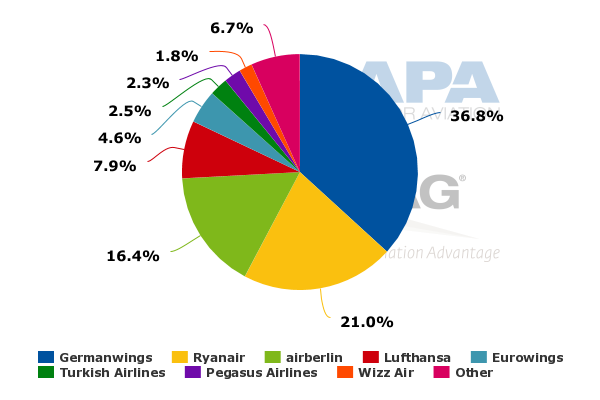 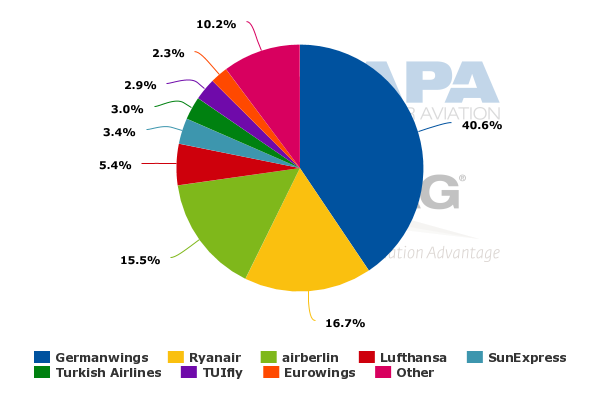 Ryanair has been main driver of traffic growth at Cologne/Bonn

Setting aside seasonal fluctuations, the most significant airline schedule development at Cologne/Bonn over the past eighteen months has been Ryanair's rapid expansion since Oct-2014, when it established an aircraft base there.

Ryanair's expansion was the most important driver of Cologne/Bonn's passenger traffic growth in 2015. Its increase in weekly seats at the airport from summer 2014 to summer 2016 will be around 24,000, as illustrated by the orange line in the chart below. This increase by Ryanair accounts for almost all of the total increase at the airport of around 26,000 weekly seats over this period (using the weeks of 30-Jun-2014 and 27-Jun-2016 as reference points).

Route launches by Ryanair from Cologne/Bonn in 2015 included:

In Mar-2016, Ryanair is to launch service from Cologne/Bonn to Malta (competing with airberlin's summer only operation), and Kerkyra Corfu in Apr-2016 (competing with Germanwings and airberlin, who operate summer-only services).

The chart below also illustrates Lufthansa's (the red line) capacity reduction and Germanwings' (the yellow line) growth between 2012 and 2014. The German national airline embarked on a strategy of transferring its short haul routes not involving either of its hubs at Frankfurt or Munich from Lufthansa to Germanwings. Airberlin's slow decline can also be detected. Its share of seats between Cologne/Bonn and Europe is around 17% in the week of 15-Feb-2016, down from 24% four years previously. 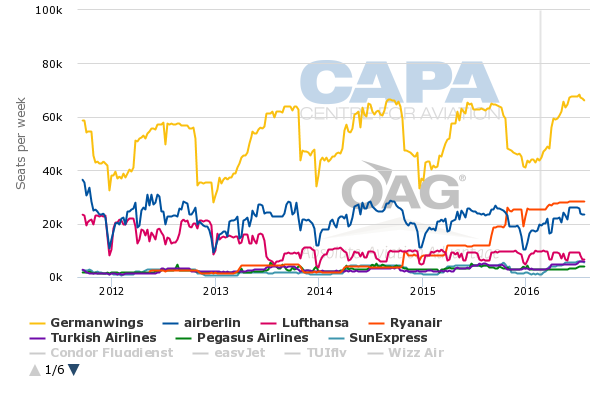 Ryanair's Sep-2015 entry into the German domestic market with the launch of its Cologne/Bonn-Berlin Schönefeld service has given it a share of around 12% of domestic seats at Cologne/Bonn (week of 15-Feb-2016, source: OAG). This market share has come mainly from the Lufthansa Group, but also from airberlin.

However, as is often the case with new entry, particularly by LCCs, the overall market has grown. The week of 15-Feb-2016 has around 14,000 more seats in the domestic market from Cologne/Bonn compared with the same week a year earlier.

Ryanair continues to have plans for more significant expansion in Germany. It has said that it plans to increase its share of the German market (international and domestic) to 20% in the coming years, from 5% currently.

Ryanair, with costs 60% below Lufthansa's, begins an onslaught on domestic Germany

Cologne/Bonn is Germanwings' largest base; transfer to Eurowings has not yet happened

In the week of Feb-2016, Germanwings' total of 39 routes compares with Eurowings' 12. Only five of these 12 are within Europe, which is Germanwings' sphere of operation, and Eurowings is now operating alongside its sister company on all five (rather than replacing it). These routes are from Cologne/Bonn to Hamburg, Prague, Dresden, Milan Malpensa and Leipzig Halle.

Other than Hamburg, Eurowings is operating all of these short haul routes as winter-only with a single weekly service deploying 86 seat Bombardier CRJ Regional Jets. The Hamburg service also deploys regional jets, but with 9 weekly flights. Eurowings is to replace its remaining 16 CRJ900s with A320s as it assumes Germanwings' short haul routes, so these five routes are being readied for the transition.

But Eurowings has its long haul base at Cologne/Bonn

Meanwhile, Cologne/Bonn's main purpose for Eurowings is to provide it with a long haul base from which the Lufthansa Group can develop its LCC brand on intercontinental routes, which has never been part of Germanwings' business.

The seven current Eurowings destinations outside Europe are Dubai, Punta Cana, Varadero, Bangkok, Phuket, Cancún and Puerto Plata. Eurowings will add Mauritius in May-2016. Plans to launch Las Vegas, Boston and Miami services have reportedly been delayed until Jun-2016.

Meanwhile, although long haul remains a very small part of Cologne/Bonn's capacity, global super connector Turkish Airlines has been quietly growing at the airport. Its summer 2016 seat numbers, while only a low single-digit percentage of the total, will be up by around 70% compared with summer 2014, according to data from OAG. It will have significantly more seats than Eurowings' long haul capacity (and around two thirds of the latter will be to Latin America).

In the absence of significant competition on long haul routes to Asia Pacific (and Africa), Turkish Airlines is well placed to capture eastbound long haul traffic via its Istanbul hub in preference to Lufthansa's Frankfurt hub. It was partly out of anxiety over Turkish Airlines' growth in German secondary cities that Lufthansa ended codeshare arrangements with its Star Alliance partner in 2013.

Lufthansa ends codesharing with Turkish Airlines. A full rift would mean new strategies for each

The more recent decision by Lufthansa to outsource Eurowings' long haul operation to SunExpress, a 50/50 joint venture company with Turkish Airlines, is a sign that the two can still work together. Nevertheless, Turkish continues to grow in secondary German cities.

The story of Cologne/Bonn in recent years has illustrated a number of developments in the European airline industry:

More developments can be expected in this continually evolving marketplace.