The Civil Aviation Authority of Singapore (CAAS), operator of Changi International Airport and provider of ATM and other services, reported a sharp 15.2% reduction in operating profit for the 12 months ended 31-Mar-08, as operating costs rose 20.2% year-on-year, mainly related to the opening of the cavernous new Terminal 3 at the start of 2008.

Revenue rose a healthy 8.8% year-on-year, thanks largely to a 17% surge in retail concession revenue (to account for 39% of the total). Passenger numbers rose 4.8% last financial year to 36.7 million on a 3% increase in aircraft movements to 220,746. 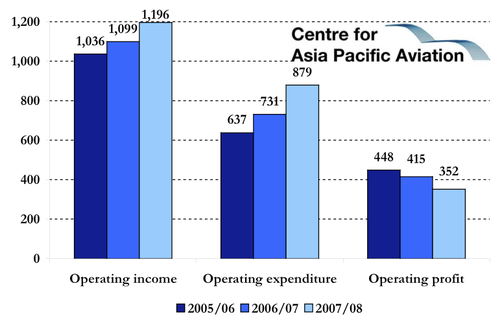 The earnings report follows the announcement in Oct-08 of the biggest upheaval to Singapore's aviation structure in decades. Reflecting rising international challenges and opportunities, Singapore Government-controlled Temasek will acquire Changi Airport and its operating businesses.

Announcing the latest earnings report, Mr Liew stated, "with a sharper customer and business outlook, enhanced ability to pursue overseas ventures as well as increased flexibility to attract and retain talent, Changi Airport will be ready for the 21st century,' he noted. 'At the same time, the restructured Civil Aviation Authority will be better able to play its role as a leading aviation authority to focus and improve on regulatory, promotional and service activities to make Singapore a leading global air hub".

Strong growth ahead as LCCs boom

The restructure of CAAS is effective 01-Jul-09 - a much more rapid programme than expected, reflecting the priority the government has attached to it as the aviation world moves on at a rapid pace. This is typified by the explosion in LCC capacity that will enter the Singapore market from Dec-08, as the bilateral air services agreement with Malaysia is liberalised. Singapore has much work to do to challenge for leadership of the LCC segment from fast-charging neighbour, Malaysia.

Singapore is finding that the excellence of facilities alone will not attract airlines. Despite the outstanding nature of its infrastructure, CAAS has suffered from a perception - inside and out - of being a bureaucratic entity, rather than an edgy commercial operation. As both the national regulator and the operator of the country's only commercial airport, this is not surprising.

Senior Minister of State for Transport, Lim Hwee Hua, stated, "the whole idea of transferring ownership to Temasek is to have a clearer separation of the role of the policymaker, regulator and the operators". She added the restructuring and corporatisation would enable the airport to "stay nimble and capitalise on new opportunities". 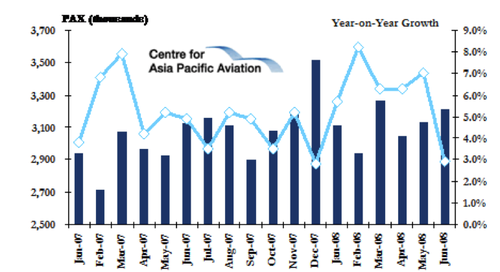 Traffic growth rates, which have eased lately, should pick up in Dec-08, with the influx of LCC capacity to Malaysia. The LCC segment is expected to be the key driver of growth within Asia in the years to come, and the newly corporatised Changi will be aiming to maximise its share of the pie.

CAAS continues to be active overseas via its management and investment arm, Changi Airport International (CAI), which this month confirmed it is among those shortlisted to invest in a new airport project in Kunming in Southwest China. The investors may pay as much as USD900 million for a stake in Yunnan Airport Group, the company that will operate the planned airport. Fraport has also been shortlisted.

CAI has an established international track record. It owns a minority stake in China's Nanjing Lukou Airport and provides management and consultancy services in several countries including Russia, China, India and the United Arab Emirates. CAI is expected to become an even more aggressive participant in the global airport sector as its parent is corporatised.