Seoul has emerged as one of the world’s largest aviation markets, with traffic poised to reach the 100 million passenger milestone in 2019 or 2020. The market has more than doubled in size since 2009, when there were 44 million passengers.

The Seoul market has become large enough – and is growing fast enough – to merit consideration of potential alternative airports to supplement Gimpo and Incheon. Cheongju, a joint military/commercial airport located an hour and a half to the south of Seoul, is vying for hub status as part of an ambitious aeropolis project.

The low cost start-up Aero K has selected Cheongju as its base, which should significantly accelerate the airport’s growth. Cheongju already counts the existing Korean LCCs Eastar Jet, Jeju Air and Jin Air as its largest airlines and may add an LCC terminal to cater to growth as Aero K and the existing competitors expand.

LCCs already account for more than 30% of passenger traffic at Incheon and will need to consider alternative hubs as Incheon approaches capacity. With improved ground connections to Seoul and lower costs, Cheongju Airport should be able to attract price sensitive leisure passengers travelling between South Korea and its three largest international markets – China, Japan and Vietnam.

Aero K will be participating in a start-up studio at CAPA’s LCCs in North Asia Summit in Cebu on 25-Jun-2019. There will also be a panel discussion at the Summit on how to attract LCCs to your airport. For more information on the Summit please click here.

Cheongju punches well above its weight, given its population. The city has less than 1 million residents, which puts Cheongju outside the 10 largest cities in South Korea.

However, Cheongju is able to position itself as a third airport for Seoul because of its proximity to the Seoul metropolitan area. There are also several small but growing cities in its immediate catchment area. For example, Cheongju is the closest airport to Sejong, a small (population 300,000) but fast expanding city that is slated to become the next administrative capital for South Korea.

Cheongju has grown rapidly over the past several years but dipped in 2017 and 2018 due to a sharp drop in China traffic. 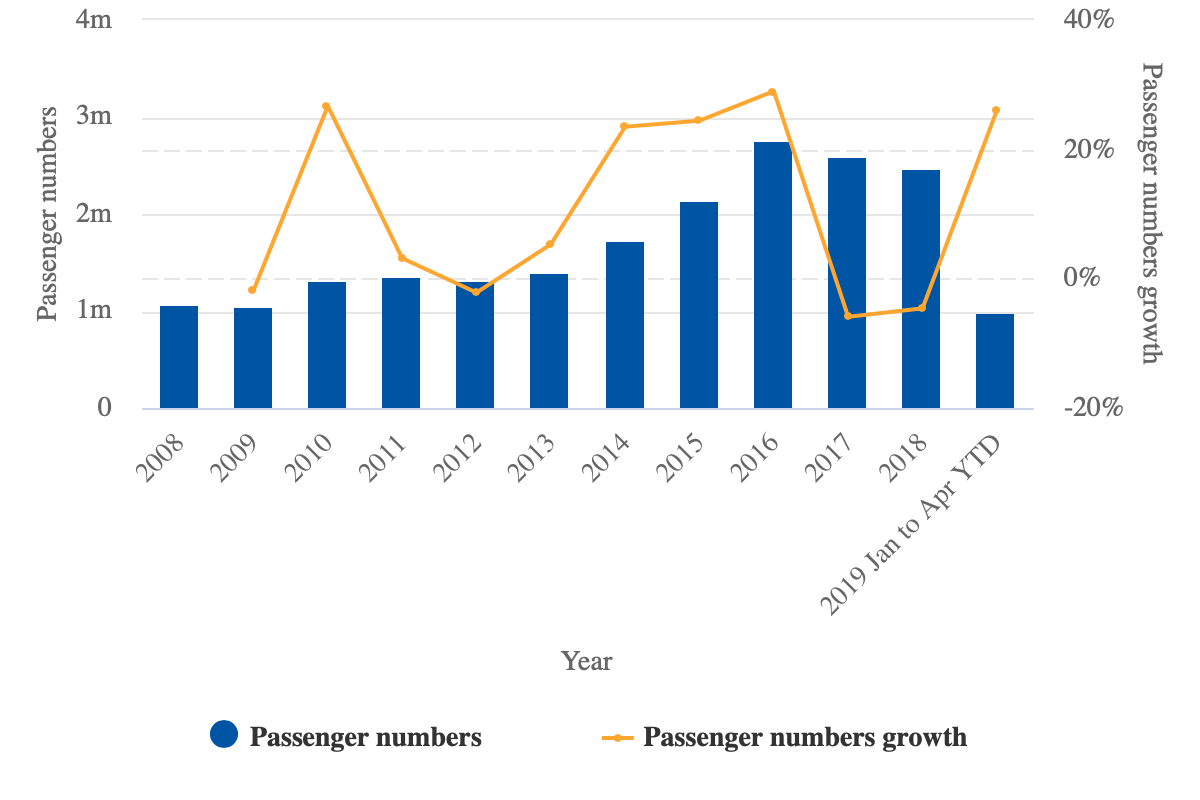 Cheongju was impacted in 2017 and 2018 by the decline in China-South Korea demand following China’s politically motivated ban on group tours to South Korea. The China-South Korea market has since recovered and is growing again, helping to drive a new phase of growth for Cheongju.

China currently accounts for 53% of Cheongju’s international seat capacity (based on OAG schedules for the week commencing 10-Jun-2019). Cheongju is currently linked to eight cities in mainland China.

Cheongju currently has only three other international destinations, consisting of two in Japan and one in Taiwan. Cheongju also has seasonal service to Russia; multiple points in Siberia are being served this summer with a low frequency service that operates from late June to September.

Cheongju previously has had limited seasonal services to Macau, Hong Kong, Mongolia, Thailand and Vietnam (only Vietnam has had any scheduled services within the past year).

Osaka is the only international destination that is served daily

While China dominates the network, Japan and Taiwan generally have higher frequencies than any of the Chinese destinations.

The Cheongju-China market is growing again

China is almost entirely an inbound market, whereas Japan and Taiwan have a more even mix of inbound and outbound traffic. Although Cheongju has been working to develop local tourism, most of the inbound passengers head directly to Seoul.

Cheongju’s international passenger traffic dropped by 48% in 2018 but increased by 165% in the first four months of 2019 due to the recovery in the Chinese market. There were 12 to 14 weekly one-way flights in the Cheongju-China market in the 1Q2019, compared to seven to nine frequencies in 1Q2018 (based on OAG data).

April traffic was not at record levels but was up 156% compared to Apr-2018. Cheongju’s international market is highly seasonal due to the seasonal nature of outbound leisure traffic from China.

Cheongju has just one domestic route – to Jeju. However, this is a very large route and accounts for nearly 80% of Cheongju’s current seat capacity. The Jeju route accounted for an overwhelming 87% of Cheongju’s total passenger traffic in 2018.

Asiana has three daily flights on the route, as does the independent LCC Eastar Jet. Korean Air currently has 24 weekly flights. All Cheongju-Jeju flights are operated with narrowbody aircraft (A320s/A321s for Asiana and 737NGs for the other four competitors).

Jeju is a popular destination for all Koreans, including residents in the Cheongju area. The Korean carriers are also able to attract Seoul area residents to their Cheongju-Jeju flights, although Gimpo is significantly closer to central Seoul than Incheon. (There are no flights from Incheon to Jeju.)

Gimpo-Jeju is the world’s largest route. However, Gimpo-Jeju flights are often full and relatively expensive, making Cheongju-Jeju an attractive alternative, particularly for residents in southern Seoul.

PSCs at Cheongju Airport are KRW5,000 (USD4.25) lower than at Gimpo and base fares are also often lower.

Existing LCCs could establish a Cheongju base

None of the existing Korean carriers base aircraft or crew at Cheongju. Seoul-based crews are used on the Cheongju flights by rotating aircraft from Gimpo via Jeju. Some Korean carriers also now bussing crews from Seoul to Cheongju.

Aero K is therefore positioned to become the first airline with a base at Cheongju. However, other Korean LCCs may be similarly enticed to set up a Cheongju base, which would particularly help support expansion in the international market.

Jin Air does not currently have any international flights at Cheongju – although it is the largest airline in the Cheongju market, with approximately a 27% share of total seat capacity (based on schedules for the week commencing 10-Jun-2019).

Jeju Air currently has only nine weekly international flights from Cheongju, including seven frequencies to Osaka Kansai and two weekly frequencies to Taipei Taoyuan. Jeju is the third largest airline in the Cheongju market, with approximately a 21% share of total seat capacity.

Eastar Jet has the largest international operation at Cheongju and currently operates 20 weekly international flights. This includes four frequencies to Osaka Kansai, four to Taipei, three to Shenyang, three to Yanji, two to Harbin, two to Shanghai Pudong and two to Sapporo.

Given that its domestic operation is now as large as its international operation, it would be difficult for Eastar Jet to continue expanding in Cheongju’s international market without opening a base.

Eastar Jet is the largest international airline at Cheongju

Eastar Jet currently accounts for 47% of international seat capacity at Cheongju. Its total share of capacity is 24%, making it the second largest competitor after Jin Air. 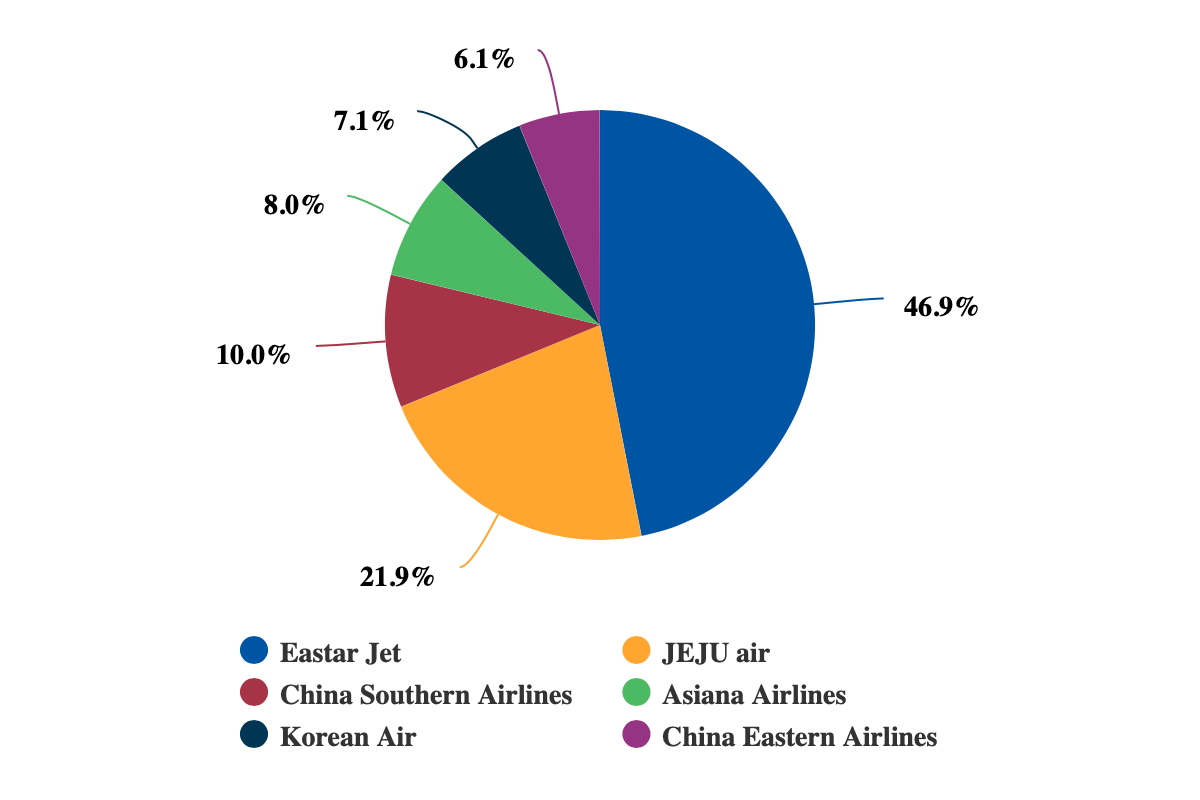 The Yanji route is the only China route with two competitors, which explains the higher frequency than all the others.

Other Chinese airlines have previously served Cheongju but none have operated any scheduled flights since 2016.

Russia’s Yakutia Airlines is the only other foreign competitor at the moment and will operate later this summer seasonal services to Irkutsk, Khabarovsk, Ulan-Ude and Vladivostok (one weekly frequency for each route).

The start-up has big ambitions, with plans to expand its fleet to five aircraft within the first year and 20 aircraft within five years. While Aero K will likely operate some domestic services, it is primarily targeting the international market.

Although Aero K may try to add a second base at Incheon at a later stage, its business licence has been granted based on its Cheongju-based business plan. South Korea’s transport ministry granted Aero K a business licence in Mar-2019 and the airline is now working on securing an operator's certificate.

Aero K has already hired a small contingent of crew and has secured three second hand A320ceos on leases, which are slated to be delivered in 4Q2019.

Aero K initially placed an order with Airbus in Mar-2017 for eight A320ceos, for delivery from 2018. However, Aero K sold these eight slots because it encountered delays in securing a business licence. Its original application was rejected, derailing initial plans to launch operations in 2018.

Aero K is now negotiating a potential new order for 12 A320neos. It is also considering the lease of additional A320s for delivery in early 2020 – either more second hand A320ceos or new A320neos. These aircraft would enable it to expand before the delivery of the first ordered aircraft and after the delivery of the initial three A320ceos.

There are clearly opportunities for Cheongju to emerge as a low-cost alternative airport for the Seoul metropolitan area. While Cheongju Airport could potentially achieve its growth objectives by securing a base from an existing Korean airline, having its own local airline clearly will have a bigger impact.

Cheongju has been trying to position its airport as an aerospace and maintenance centre as well as an LCC hub. However, there are several major challenges to overcome for its aeropolis project to become a reality.

South Korea has existing and well established maintenance and aerospace centres at other airports. It is not necessary to have maintenance facilities to attract LCCs.

Attracting more airline services may be easier than attracting maintenance or manufacturing facilities. However, aspirations to develop Cheongju as a destination of its own may not be realistic.

Cheongju is developing its own tourism industry but will need to rely mainly on the Seoul market to support passenger traffic growth.

Even if the Cheongju region succeeds at attracting more tourists, most tourists will also spend time in Seoul and travel from Seoul directly to Cheongju Airport in at least one direction. Improving connectivity with Seoul is therefore critical.

There is a train station at Cheongju Airport but it is not on a main rail line, and the schedule is relatively limited. Korea’s KTX high speed train does not stop at Cheongju city but stops outside Cheongju at Osong, where there is a cluster of biotech companies.

More regular trains from Cheongju Airport to Osong would help attract passengers. A direct rail connection from Seoul Station to Osong could be a game changer, even if a high-speed link is not possible.

The buses have a journey time of 1hr 30min to 2hrs. The average journey to Incheon Airport is only slightly shorter.

At times it is quicker to travel from Seoul to Cheongju Airport than Incheon, particularly Incheon’s Terminal 2 (the new hub for Korean Air). However, Incheon has dozens of high frequency bus lines, making it convenient to travel to the airport from all areas of Seoul.

Cheongju Airport will also need to work on reducing costs to attract LCC growth. While Cheongju has lower PSCs than Gimpo or Incheon, landing fees and other costs are the same or are not significantly different.

The Korea Airports Corporation, which manages all commercial airports in South Korea except Incheon, should look at reducing landing and other fees at Cheongju. It could also introduce mechanisms for attracting more suppliers and incentivising new routes. Local governments could also encourage growth and competition by offering incentives and grants.

The future success of Aero K and Cheongju Airport is hardly guaranteed. But the Seoul market, particularly the LCC market, has clearly reached a size where alternative airports should be considered.