Virgin Blue stated there is a “lot of change underway”, as the carrier seeks to compete effectively in the corporate and government market and profitably expand its market presence domestically and internationally.

In an address to the Australian‐British Chamber of Commerce on 20-Apr-2011, Virgin Blue CEO John Borghetti stated the carrier is enacting significant changes not for change’s sake but because it “makes good business sense”. In pursuing this strategy change, Mr Borghetti noted the vulnerability of the leisure market and the need for more competition in the business market.

Mr Borghetti, who joined as the carrier’s CEO 11 months ago, stated Virgin Blue’s enormous exposure to the leisure market meant that it is “much more sensitive to macro economic fluctuations than the business market”. “It is also reliant on consumer sentiment and discretionary spending which is not only influenced by the economy but also substitution effect. Consumer choices such as “will it be a new plasma TV or a weekend away?” The business market in contrast is far more resilient. From our perspective, this higher yielding market not only provides a greater source of profitability but also lower volatility of our revenue line,” he said. The carrier is targetting to increase its share of the business market from the current 12% to 20%.

As part of this, the carrier is expanding its international network through codeshare partners, targetting the corporate and government market in addition to the leisure market and is seeking to expand in Asia. The carrier is also seeking to simplify its branding strategy, which comprises of multiple brands at present.

Mr Borghetti stated changes would be made to strengthen its international proposition, across both the V Australia and Pacific Blue brands. Mr Borghetti noted that “to compete effectively in the corporate and government market, an extensive international network is clearly essential. Without it, the frequent flyer proposition is weak and we would also be at a disadvantage against the airlines that can provide a one-stop “network shop”.

The carrier has chosen to build up a virtual international network by operating its aircraft to hubs and establishing alliances with airline partners in key markets. This enables the carrier to expand at a faster pace and with less capital backing than if it were to expand on its own.  Accordingly, the carrier has developed partnership with Etihad Airways, Air New Zealand and Delta Air Lines.

Virgin Blue has previously stated it expects to see “solid” momentum from its international alliances. The expanded international network is a key requirement for corporate market penetration and to increase the value of the carrier’s Velocity FFP programme. The carrier is also reviewing its Velocity FFP, with a relaunch planned prior to 31-Dec-2011. The programme now has 2.4 million members and is growing by approximately 1100 new members per day. 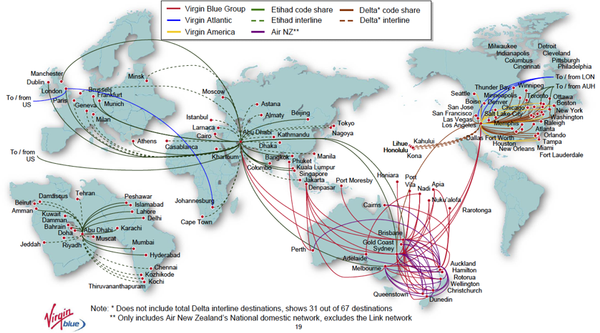 Mr Borghetti this month also announced the airline is in "advanced discussions" with Hawaiian Airlines about a partnership, which would be the airline’s fourth. "You will see us put out those new flights to Hawaii from Australia shortly," Mr Borghetti said.

The carrier is also enacting a number of changes to the carrier’s network to use its flying assets more productively. The carrier recently exited the domestic New Zealand market and ceased flying its B777s to Phuket, Nadi and Johannesburg. The carrier has reallocated some of this capacity and increased frequency to Los Angeles, including a move to daily flights from Sydney, and an additional frequency from Melbourne. The Sydney‐Los Angeles services were also retimed to allow the carrier to meet connections to the East Coast. Mr Borghetti stated these changes have “had a noticeably positive impact on our long haul yields”.

Meanwhile, Virgin Blue and subsidiary V Australia have been admitted as members of the International Air Transport Association (IATA) with the move seen as a significant step in its efforts to enhance its brand and international operations.

IATA represents 230 airlines in more than 120 countries, most of which are full-service carriers. IATA membership required Virgin Blue to pass the body’s Operational Safety Audit, and should provide the airline with cheaper access to a host of front and back-office services to help contain costs, improve cashflow and maximise efficiency, including IATA’s settlement and e-ticketing solutions. IATA member airlines pay a USD45,000 joining fee and ongoing annual membership fees, currently set at USD16,755.

Over its decade-long history, Virgin has never previously sought IATA membership due to its low-cost airline status and has simply paid to use IATA's services

Mr Borghetti also signalled the carrier’s expansion into the Asia Pacific market stating it has set its sights on expanding into the “fastest growing region globally”. However, he declined to elaborate, stating Virgin was "not ready" to reveal details.

“Australia is a very affluent market, but it is ultimately a small and fairly mature aviation market. However, we are positioned right on the doorstep of Asia, the fastest growing region globally. The IMF predicts that within five years Asia’s economy will be about 50 percent larger than it is today, account for more than a third of global output, and be comparable in size to the economies of the US and Europe. Furthermore, by 2030, Asian GDP will exceed that of the G7 economies. I am sure I hear you say “John, why are you not in Asia?” To that I would simply say we are not going to leave this important part of the globe uncovered,” he said.

Improvements in the domestic market

The carrier, meanwhile, continues with a number of product initiatives in the domestic market, with Mr Borghetti nothing that there are “any more to come”. "We want to be the best airline and the airline of choice in this country and we will be within three years,” the CEO added.

As part of these improvements, the carrier is introducing A330 aircraft twice daily between Sydney and Perth in May-2011. The aircraft will feature the carrier’s new business and “superior” economy class product. In a first for Virgin Blue, the airline will offer business class on its domestic network, with two new A330 aircraft commencing operation in May-2011 providing a three times daily service from Jun-2011. The new leather seats will have a 62 inch seat pitch, seatback multi-channel IFE and a range of food options. 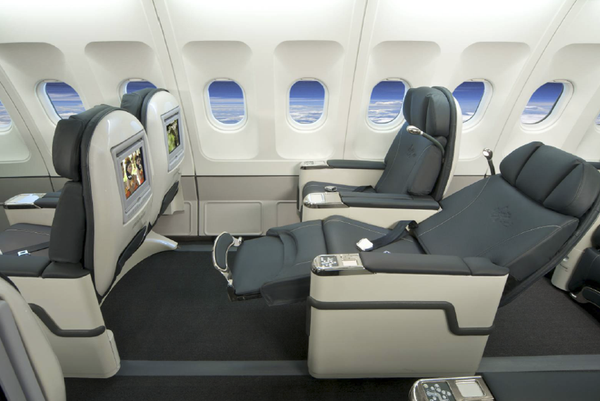 Virgin Blue is also refurbishing its lounges and will open new facilities in several ports over the next 12 months. The first will be Melbourne and Brisbane that will open within the next two months. In Apr-2011, the carrier also launched what “we believe to be the only product in the world where premium customers can exit their vehicle and within 20 metres can enter our airport lounge”.  The service will allow passengers with carry-on baggage to avoid ordinary check-in queues and use a dedicated entrance and security checkpoint that delivers them directly into the airline's lounge. 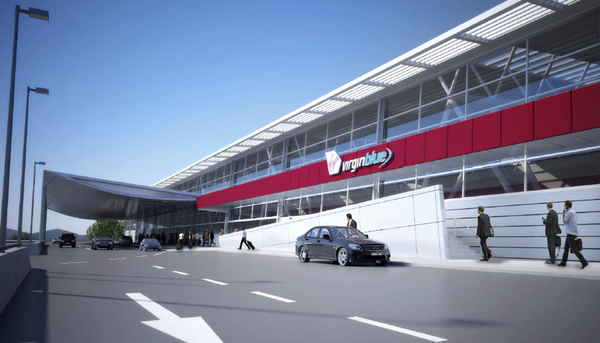 These product enhancements form part of Phase I of the carrier’s new product offering with Phase II to be announced prior to 30-Jun-2011. 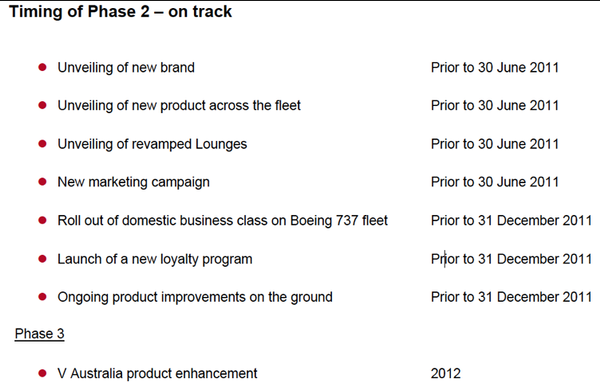 Meanwhile, Virgin Blue's regional partnership with Skywest would be used to take on incumbent Qantas or Jetstar on regional east coast routes, Mr Borghetti said. Virgin plans to lease up to 18 turbo-prop aircraft from mid-2011, to be operated by Skywest. This will allow Virgin Blue to fly to new destinations in regional Australia currently not economical for jet operations. 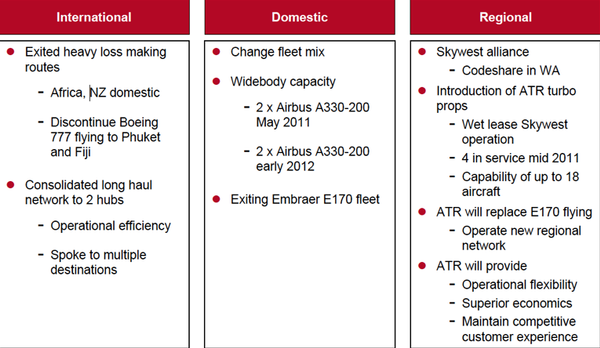 Four separate brands to be consolidated

Mr Borghetti said the Virgin Blue Group would work to consolidate its four separate brands, Virgin Blue, V Australia, Virgin Atlantic and Pacific Blue, saying it was "confusing for customers and not very productive". The carrier is also seeking to simplify its branding strategy, which comprises of multiple brands at present. “You may not see us move to a single brand, but I can guarantee a rationalisation – four is too many, any number less is good. You will also see greater consistency between the domestic and international product – currently they feel like very different airlines – that will change," Mr Borghetti said.

Mr Borghetti also stated that Virgin Blue has a beneficial cost advantage over Qantas. The carrier has a fleet with an average age of less than five years, “which is less than half that of our major competitor”.  Mr Borghetti also noted that Virgin Blue does “not have the legacy costs or systems complexity that more established carriers have inevitably built up over time”.

Opportunities in the long term, challenges in the short term

Virgin Blue, under the new leadership of John Borghetti, is radically overhauling its operations, product, image and direction. As Mr Borghetti recently stated, “I thought there were opportunities before I came here – but nothing like as many as there are”. The road ahead will likely face its ups and downs, with the carrier last month announcing its fourth earnings downgrade in the past 12 months, as Mr Borghetti converts the so-called opportunities into a more effective and resilient business model.