European airline stocks were mostly up on Wednesday (03-Mar-2010), moving higher with the wider market after Greece released a new set of austerity measures to overcome its debt issues. However, gains were capped by a 1.5% rise in oil prices, to USD80.87.

British Airways (-0.6%) slipped after reporting a 2.2 ppts year-on-year improvement in load factor for Feb-2010, to 74.2%, as traffic (RPKs) rose 1.1% and capacity (ASKs) fell 1.9%. Traffic comprised a 5.0% increase in premium traffic and a 0.3% increase in non-premium traffic. Feb-2009’s traffic data was affected by significant weather disruption in the first week of the month.

CEO, Willie Walsh meanwhile also stated during trading that he would not cave in to pressure from cabin crew union, Unite, and outlined a contingency plan if staff do go ahead with a proposed strike. BA has trained approximately 1,000 staff to conduct cabin crew duties, should the industrial action occur.

The carrier also stated it expects to sign a merger agreement with Iberia by the end of the month. Iberia was flat at the end of trading.

Also during trading, the carrier won a case against easyJet (-0.6%) in which Ryanair claimed its rival “denigrated” it by suggesting in advertising material that the carrier did not transport passengers to the correct destination. easyJet shares slipped 0.6% yesterday. 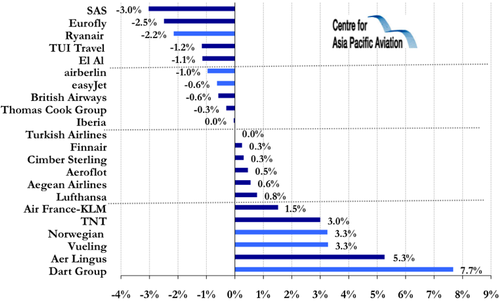