British Airways’ (-1.6%) fell after cabin crew union, Unite, announced its members have voted “overwhelmingly” for strike action, in the long-running dispute over imposed changes to crew numbers and working practices. 80.7% all balloted members voted yes to industrial action. The union has not announced dates for industrial action, but strikes are expected to be held during Mar-2010.

Lufthansa (-1.7%) shares also slid, following the commencement of its four day pilot strike. Later in the day, the strike was suspended, but the airline stated the consequences of the strike will lead to continued flight irregularities up to and including 25-Feb-2010. The group cancelled approximately 800 flights on 22-Feb-2010 as a result of the strike, including some cargo operations.

The strike was cancelled after pilot union, Vereinigung Cockpit (VC), agreed to resume negotiations “as quickly as possible and without preconditions” with the carrier, following a court hearing in which Lufthansa sought to have the strike declared illegal. The carrier claimed in an injunction filing that some of the union’s demands violated a no-strike clause in labour contracts, and that its LH Italia SpA division should not be included in the strike.

Aegean Airlines (+0.5%) gained slightly after announcing with Olympic Air that each company's shareholders have reached an agreement to merge the two airlines, and create a new company to be listed on the Athens Stock Exchange. The agreement, which is subject to the approval of the European Competition Commission, will see main shareholder of Aegean (Vassilakis Group) and the sole shareholder of Olympic (Marfin Investment Group) take an equal shareholding in the combined entity. The combined company will carry the name and logos of Olympic Air, with Chairman Mr Vassilakis of Aegean and Chairman Vgenopoulos of Olympic to lead the company. 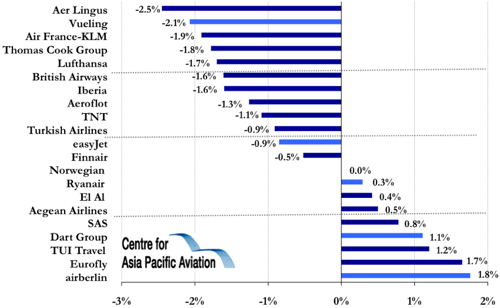