Fresh from the ground breaking of its new CSeries fuselage factory in Shenyang, Bombardier Aerospace announced an MoU with one of China’s top leasing companies, CDB Leasing Co (CLC) for up to USD3,850 million billion in capital, availability to support both domestic Chinese and international transactions of Bombardier aircraft.

The deal clears the way for CLC to offer pre-delivery payment financing, delivery financing and leasing solutions to customers of Bombardier CSeries, Q400 turboprops and CRJ aircraft. Gary R Scott, President of Bombardier Commercial Aircraft commented that financial resources of CLC will “put Bombardier in a stronger competitive position to recommend financing and leasing solutions for potential customers in China and elsewhere.”

Wang Chong, Chairman of CLC, noted that the benefits of the MOU would be mutual, “as both CLC and Bombardier are constantly looking to satisfy the needs of airlines and operators seeking optimized aircraft solutions, particularly those offered by Bombardier.”

“Producing this demonstrator has been a significant investment for us, but will bring significant benefits,” said VP and General Manager, Bombardier Aerospace, Belfast Michael Ryan. With the rigorous testing programme, Bombardier will generate test data which will enable the manufacturer optimise the design of the actual CSeries aircraft production wing.

Elsewhere on the aircraft development front, reports have emerged that Boeing is concerned by some slowness on the B787 test programme, although the manufacturer is confident that it will still deliver the first production aircraft to All Nippon Airways before the end of the year. While the aircraft passed the vital wing ultimate load test over the weekend, Boeing has admitted that it does not yet have a firm date for when the US Federal Aviation Administration will begin its in-flight certification testing process for the aircraft. The process could take several months to complete and was originally scheduled to commence in mid-Feb-2010. A reason for the delay has not been disclosed.

In trading on Tuesday, Boeing shares dropped 0.8%, while rival EADS fell 2.8%, with news that the UK will be cutting its A400M order. Bombardier's shares were flat, while fellow regional jet manufacturer Embraer was up just 0.1%. 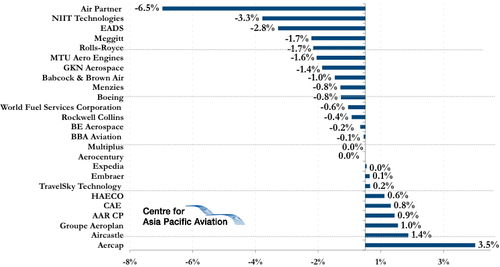