Brazil’s third largest airline Azul begins 2014 armed with the final regulatory approval of its merger integration with Brazilian regional carrier TRIP and the possibility of undertaking a public offering after shelving plans for an IPO during 2013.

Even as Azul continues to chart a steady course of growth, it does face some headwinds in 2014 as its recent declaration to cap fares for the upcoming Jun-2014 World Cup will result in a revenue hit of BRL20 million (USD8.4 million). The projected loss occurs as Brazil’s economy remains weak, which has resulted in depressed demand in the country’s domestic market during the past year.

Similar to Mexico, hopes are high that Brazil’s economy will undergo a rebound during 2014. But that does not necessarily translate into a rebound in demand as some cost conscious travellers may choose to hold onto their discretionary income until they conclude an economic recovery is well underway. Those dynamics will certainly play a role in Azul’s evaluation of whether to access public markets for a capital injection.

Although Gol increased its domestic supply by nearly 5% year-on-year between Jan-2013 and Nov-2013, it started slashing capacity ahead of TAM during 2012 as a means to improve its negative financial performance. During the first 11 months of 2013 TAM’s domestic capacity fell 8% year-on-year while traffic remained essentially flat.

Azul’s market share increased from 10% to 13% year-on-year for the first 11 months of 2013 while Avianca Brazil’s share rose 2ppt to 7%. Factoring in TRIP’s 4% share, Azul’s total share of the Brazilian domestic market was 17%. Purely looking at the numbers, Azul has achieved its goal in acquiring TRIP – to quickly build up its share in a fast moving Brazilian market.

At the same time TRIP has been shrinking, reflected in its 17% capacity decline year-on-year from Jan-2013 to Nov-2013 and its 7% drop in traffic. TRIP’s decreasing supply is likely the result of network optimisation undertaken as Azul and TRIP combined their respective route offerings.

Brazilian regulator ANAC gave its final approval to the integration of Azul and TRIP in Oct-2013, although it appears there is some labour unrest about compensation rates between the two carriers. Reports in the Brazilian press indicate that Azul’s cabin crew union is unhappy about differences in compensation and benefits, and claimed TRIP had higher remuneration packages. Those reports stated the union was planning to voice its opposition of the integration in a Brazilian labour court.

Azul chairman David Neeleman has indicated the salary issues could result in pilots at Azul and TRIP continuing to operate their respective aircraft in the same fashion as prior to the merger. Without the benefits of cross-fleeting some synergies could be lost, which is not an ideal scenario in successfully executing a merger.

Despite the pressing need to iron out labour issues, Azul is continuing to add new markets. It recently introduced new service from Salvador to Paulo Afonso and Porte Alegre to Passo Fundo. Both routes are operated with 68-seat ATR 72 turboprops. Azul has also upped competition with Gol on new service from Sao Paulo Guarulhos to Navegantes, also operated with ATR turboprops.

Azul competes with small operator Brava Lihas Aéreas on Porto Alegre to Passo Fundo and has no competition on service between Salvador and Paulo Afonso, according to OAG data. Those routes demonstrate that untapped markets within Brazil’s domestic space remain; however Azul needs to get its internal house in order to ensure it can expand profitability. It cannot rely on a market share grab as a viable business strategy for the long term.

Presently, Azul has roughly a 17% share of system-wide seat deployment in Brazil and a nearly 21% share of domestic seats (includes TRIP), according to CAPA and OAG data. Its growth has been impressive, but now that Azul is close to reaching its six year anniversary, it needs to display some financial traction. Based on public documents, the carrier lost USD82 million during 2012. 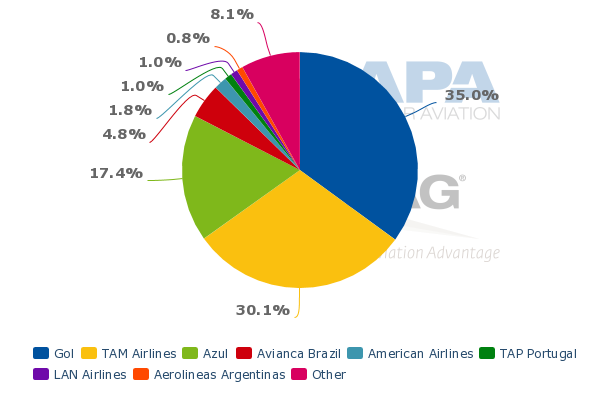 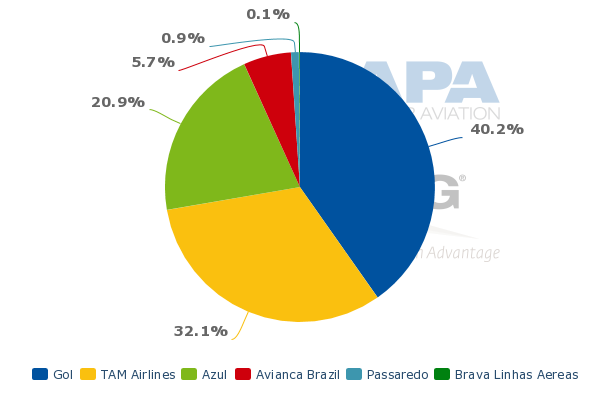 In early Jan-2014 Wall Street Journal reported that Azul would cap ticket prices at USD420 per segment for the World Cup soccer tournament held in Brazil beginning in Jun-2014. Along with outlining the BRL20 million (USD8.4 million) revenue loss Azul will endure as a result of capping fares, Mr Neelemen also remarked that Azul expects corporate demand to fall during the tournament.

The Journal reported that as a result of weak business sales Azul would cancel roughly 20% of its 900 daily flights between 12-Jun-2014 and 13-Jul-2014. It has asked regulators for permission to bolster service between the 12 World Cup host cities (see map). But even if it gains approval, its revenue hit from the World Cup will likely be higher than the estimates provided given the decline in higher-yielding corporate traffic.

Conditions remain murky as Azul contemplates an IPO in 2014

Azul management has talked about reviving its quest for an initial public offering in 2014 after announcing an IPO in May-2013. It shelved plans shortly after, citing unfavourable market conditions. Given the financial hit it outlined from the World Cup, and the continuing uncertainty in the Brazilian economy, it may be just as tough for Azul to attract investors in 2014.

Azul has filed an application with Brazilian authorities to register as a public company in the country. Regulators rejected a previous application by the carrier after raising concerns that its capital structure would value preferred shares at 75 times higher than ordinary shares. Azul does not necessarily have to list on Brazilian exchanges, but it seems its preference is to conduct offerings in Brazil and the United States.

Brazil’s GDP growth is projected at 4% during 2014 after growing around 2% in 2013. The improvement is encouraging, but a cloud of uncertainty hovers over the ability of Brazil’s economy to rebound, not to mention the mounting questions over its readiness for the World Cup.

When it declared its intention to issue public shares in May-2013, Azul noted part of the proceeds would be dedicated to paying off a USD58 million loan carrying a 10% interest rate due in Jun-2014. The loan represented nearly 42% of the USD139 million in cash and equivalents Azul had on hand as of 31-Mar-2013. If Azul opts not to access the public markets for financing, it will need to find other means to fund its expansion and meet its financial obligations.

See related report: Azul’s IPO is at a challenging time for economic and traffic growth in Brazil – but offers potential

Despite the immediate challenges that Brazil’s economy has created for the country’s domestic airlines, eventually demand will slowly start to rebound. With its fleet of Embraer 175s/190s/195s and ATR turboprops Azul seems poised to capitalise on migration of middle class travellers from bus to air transport, particularly in underserved markets.

But in the near term the carrier needs to remedy any lingering problems from its merger with TRIP, and ensure it generates the necessary revenue to gain a solid financial footing in order to attract investors willing to stick with the carrier over the long term.