Changing market dynamics are driving several network adjustments at Latin America’s two largest airline groups – LATAM and Avianca Holdings. Those companies are navigating currency pressure and rising fuel costs, and as a result they are working to maximise the profitability of their respective networks.

LATAM is opting to cut some long haul flights and service to Argentina, and instead will focus on regional international routes and growing service in Brazil’s domestic market as its competitor Avianca Brazil continues to shrink.

Avianca’s adjustments include essentially exiting Peru’s domestic market and cutting some service to the US from its Bogotá hub. At the same time, the company is opting to add capacity from Bogotá to some larger domestic routes in Colombia and Chile.

Airlines worldwide are constantly scrutinising their networks as demand patterns shift. For now, it appears that LATAM and Avianca see more opportunities within Latin America for fortifying their largest hubs.

LATAM Airlines Group is cutting eight routes in 2019 and adding nine new pairings. All the new routes are within South America and the cuts are largely focused on Argentina, along with some long haul markets that have weaker demand.

LATAM executives recently explained that the company was cutting its international supply to Argentina by 20%. Argentina is in the midst of economic turmoil and its currency has plummeted, which has affected international inbound travel to the country.

Government data show that international passenger levels fell year-on-year from Jun-2018 to Dec-2018, falling as much as 7% both in Oct-2018 and Nov-2018. Domestic passenger levels grew steadily in 2018, but there is little doubt that Argentina’s airlines battled weak yields.

LATAM is cutting flights from its hubs in Santiago and São Paulo to Tucumán and Rosario. Data from CAPA and OAG show that it was the only operator on those flights. Chile’s Sky Airline ended service from Santiago to Rosario in Oct-2018. 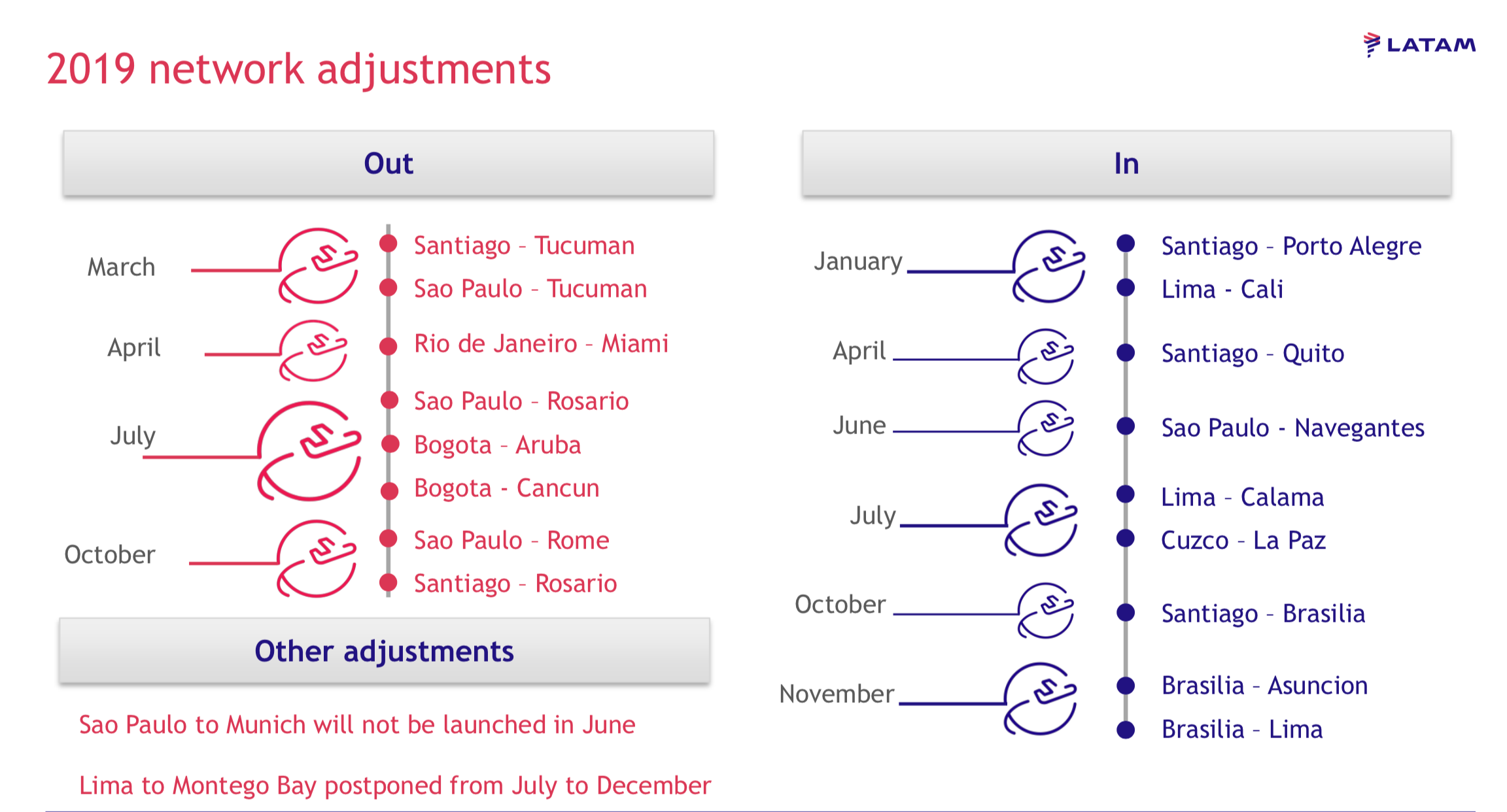 After LATAM ends flights from Rio de Janeiro to Miami its oneworld partner American will be the only airline operating on the route.

Bogotá-Cancún is the most crowded route, with Avianca, Interjet and LATAM all offering flights on the pairing. Avianca also operates flights from Bogotá to Aruba.

On the long haul routes that LATAM is eliminating, Lufthansa operates São Paulo-Munich and Alitalia offers service between São Paulo and Rome.

LATAM believes opportunities exist to bolster connectivity within South America from its hubs in Santiago and Lima, its second and third largest bases measured by ASK deployment.

LATAM Airlines Group system top ten hubs/bases/stations by ASKs, as of late May-2019 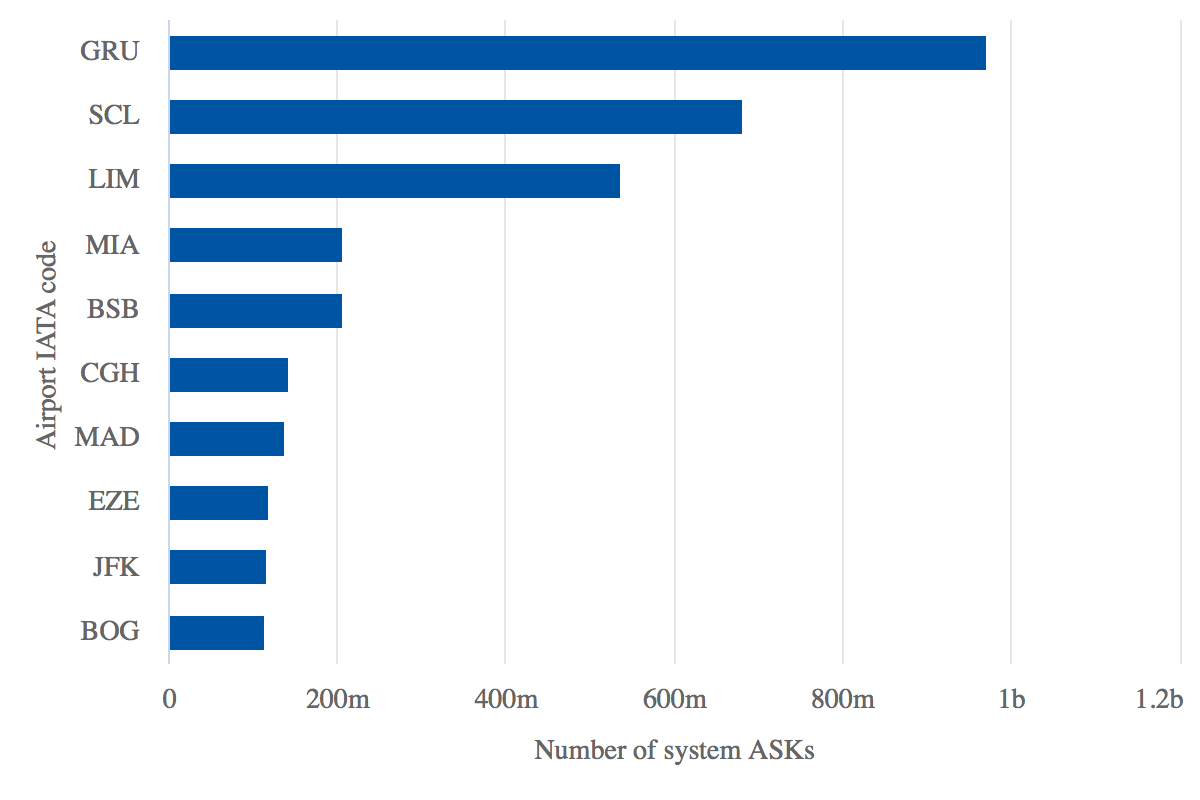 Of the nine new routes LATAM is launching, it only has competition on three of those pairings. Avianca has a 66% seat share between Lima and Cali, and Amaszonas operates between Cuzco and La Paz. Avianca Brazil and GOL have a 50-50 split on seats from São Paulo to Navegantes.

Avianca Brazil is in the process of a bankruptcy restructuring and is continuing to shrink its network, and as a result LATAM believes that process is creating opportunities in the Brazilian domestic market. LATAM is boosting domestic capacity growth in Brazil in 2019 to 5% to 7%, from original projections of an increase of 2% to 4%.

Avianca is also undertaking several network adjustments in 2019, cutting domestic routes in Peru due to their underperformance. The company has also explained that Peru has been a challenging market for Avianca for many years, noting that it was “not very lucky” with some of the slots it received in its efforts to create a schedule that was attractive to business travellers.

The company is focusing on international operations from its Lima hub, which is Avianca’s second largest after Bogotá measured by ASKs. Avianca is maintaining services on domestic flights between Lima and Cuzco, a major trunk route in Peru.

Avianca Holdings system top ten hubs/bases/stations by ASKs, as of late May-2019 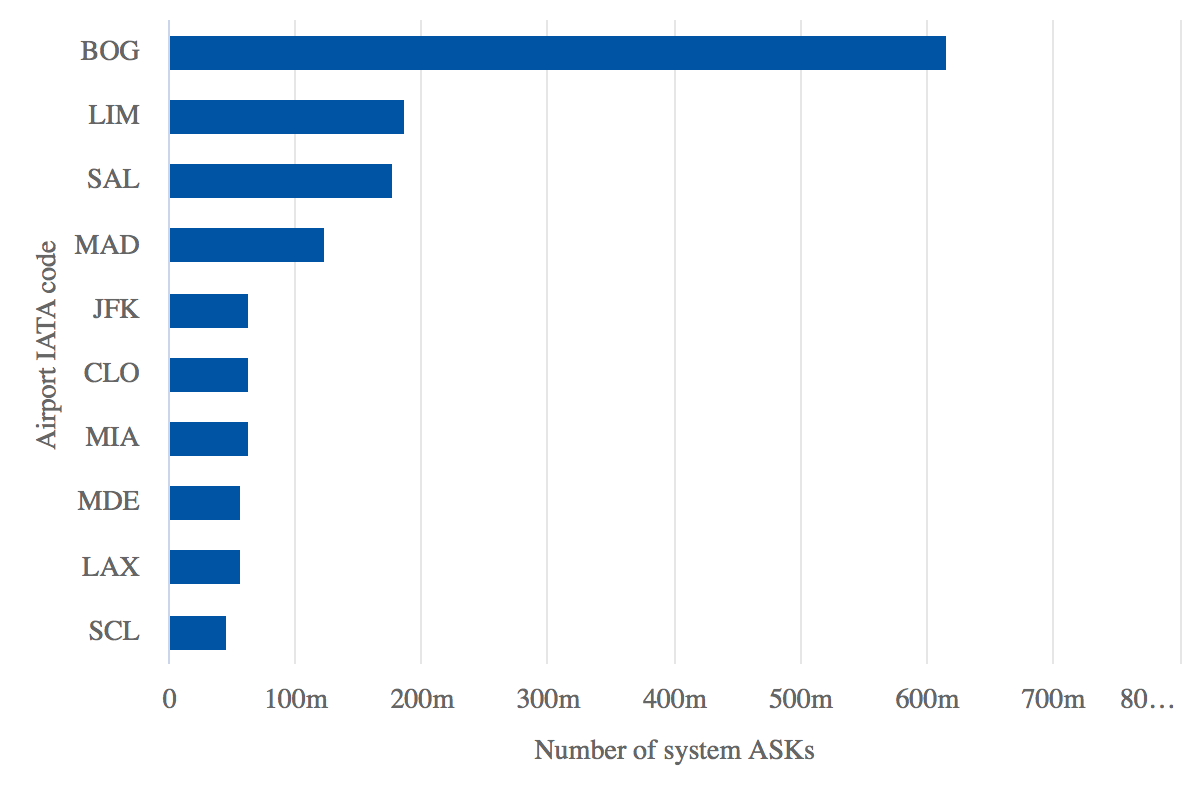 Other routes that Avianca is cutting in 2019 include Lima-Mendoza, and Bogotá to Montreal, Boston and Chicago O’Hare. It is also eliminating service from Cartagena to Pereira and New York JFK.

Of all the routes it is cutting in 2019, it only faces competition on two of the pairings – LATAM on flights from Lima to Mendoza, and Viva Air Peru and Aeropostal on services between Cartagena and Pereira.

Overall, Avianca is suspending 16 routes but also stated that it was adding capacity on its routes from Bogotá, to Medellín, Cali and Santiago.

Avianca is planning modest capacity expansion in 2019. Its current guidance shows a range of flat growth to a 2% increase.

The company has faced a challenging start to 2019, and its CEO Hernán Rincón recently left Avianca. Additionally, it has adjusted its EBIT margin forecast downward from a range of 7% to 9%, to 5.5% and 7.5%.

Both LATAM and Avianca are making interesting network moves in 2019, cutting some longer haul services in favour of focusing on more promising flights within South America.

The changes reflect each airline’s assessment in demand, and the conclusion that more profitable opportunities exist on regional international routes.

There is no doubt that those airlines are studying more network adjustments as demand patterns continue to shift in 2019.