Asia Pacific LCC stocks dropped back yesterday, led downwards by SpiceJet, which reportedly stated it has been unable to proceed with plans to raise USD75 million to support its international expansion, due to differences in valuations of the carrier. Live Mint reports up to six financial groups have submitted term sheets to invest in the carrier, but no agreements have been reached.

Virgin Blue (-3.2%) fell again on concerns about the domestic Australian outlook. But comments by Tiger Airways CEO, Tony Davis, that the Australian unit is examining international destinations within a five-hour flying range from Australia for its A320 aircraft would not have helped Virgin Blue’s short-haul international outlook. Tiger is considering destinations in Indonesia, New Zealand and the Pacific islands, but is yet to announce any specific plans, which would be subject to government approval.

AirAsia’s (-2.3%) Thai offshoot is operating amidst the massive social disruption in that country, although its strong brand and low costs make it well positioned to benefit from a future rebound in demand, once calm is restored to Bangkok and provincial areas.

AirAsia yesterday launched a one million "Free Seats" sale to major destinations including Thailand, available until 23-May-2010 for travel from 03-Jan-2011 to 08-May-2011. More discounting of near-term travel is expected to/from Thailand to help rebuild volumes. 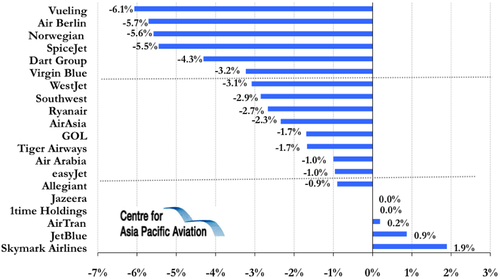