The outlook for business travel in the Asia Pacific region is improving. IATA, in its Premium Traffic Monitor for Apr-2010, commented that premium travel numbers accelerated across the North and Mid Pacific in the month, increasing by 13.3% in Mar-2010 to 15.1% in Apr-2010.

IATA added that business and consumer confidence continues to rise in China and Japan, suggesting that the “air travel upturn has still further to go”.

Meanwhile, IMF Asia and Pacific Department Director, Anoop Singh, forecast Asia’s economy (including Australia and New Zealand) would expand by 50% by 2015 (as measured in Purchasing Power Parity). Asia’s economy will, therefore, be comparable in size to the US and Europe and account for more than a third of global output, according to the IMF, which added that the recent economic crisis and global downturn has underlined the emergence of Asia as a global economic powerhouse.

In stock market news, Asia Pacific airline shares were up virtually across the board yesterday. The strongest gainers were Jet Airways and Kingfisher Airlines, with gains of 4.6% and 3.7%, respectively, as the Indian share market rose for a sixth straight session on Wednesday, the longest consecutive period of gains in nine months. 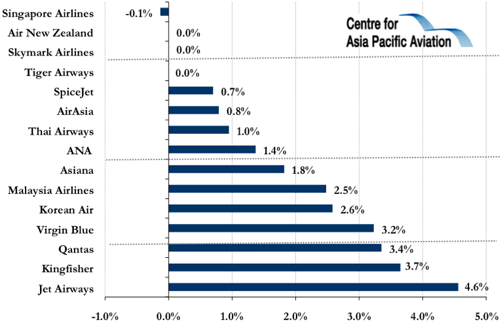 Source: Centre for Asia Pacific Aviation & Reuters
*It was a public holiday in China, Hong Kong and Taiwan on 16-Jun-2010