All Nippon Airways is Japan’s quiet achiever. Privately owned and mostly profitable, ANA has always been overshadowed by its more conspicuous competitor and flag carrier, Japan Airlines. A quarter of a century ago, while it was the largest airline in the world measured in passengers uplifted, it was almost solely domestic and few outside Japan had even heard of the airline. Even today its international brand presence is strictly limited. The unbundling of JAL following its recent bankruptcy could offer ANA the opportunity to change all that – if it has the courage to grab the potential. In a “lethargic” domestic market, international is the place to be. And that goes for long and short (low cost!) haul alike.

A negative last quarter in 2009

All Nippon reported a less than satisfactory last quarter in 2009, the third quarter in its financial year. Group revenue was down 11.9% year-on-year, to USD3,461 million, while operating costs fell only 11.6%, to USD3,566 million. This was despite a 30.7% fall in the price paid for fuel during the period. The result was an operating loss of USD105.4 million, much better than JAL’s outcome, but still unwelcome. (Note: the strength of the JPY has influenced these data).

Coming on the heels of a near-identical loss in 2008, ANA will be looking for improvement in 2010. And it will almost inevitably look to international expansion for its upside. 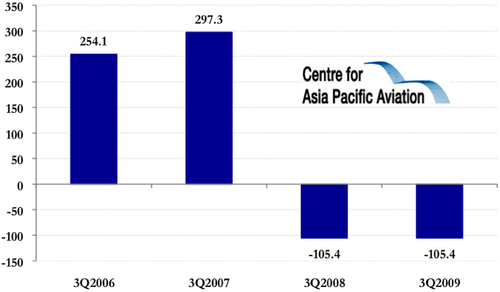 Source: Centre for Asia Pacific Aviation & ANA Group
*Based on the conversion rate at USD1 = JPY90.13

Going international, but still a work in progress

ANA has been flying international scheduled routes since 1986, but international flying still only accounts for a little over a tenth of its passenger headcount. In the nine months to 31-Dec-2009, ANA carried 30.2 million domestic passengers (down 9.1% on the previous comparable period) and 3.4 million international passengers. But, by contrast, this was slightly up, by 0.2%.

More significantly, taking only the three months to 31-Dec-2009, international passenger numbers increased by a much bigger 14.6% (to 1.2 million), while domestic figures were down 8.8%, to 10.0 million. The trend to international operations is accelerating and already ANA is making the transition.

In its 2010 Corporate Plan, released last week, the carrier made its strategy (cautiously) clear: due to the "lethargic nature of economic recovery, the trend of slow recovery for the Japanese (domestic) aviation business is likely to continue".

Despite this 2010 will, conversely, be a "year of expansion for ANA". Factors such as an anticipated capacity increase at Tokyo's Haneda and Narita airports, the scheduled delivery of the B787, as well as Open Skies between Japan and the USA will bring "important business opportunities for ANA to expand".

ANA is also to introduce a new European route, Narita-Munich, from 1-Jul-2010 and, in Asia, frequency and/or capacity is to be increased on Narita-Ho Chi Minh, Narita-Hangzhou and Narita-Qingdao.

(However, the new capacity at Narita, as slots become available, looks like being bad news for regional points. To improve cost efficiencies, ANA will reduce capacity on selected international routes from Kansai Airport.)

This is hardly opportunistic expansion on the back of an ailing competitor. But there are constraining issues. Importantly, as the launch partner for the B787, ANA’s expansion plans have been thrown into considerable disorder. The first of the line is now expected for delivery in Dec-2010.

Staying at home is comfortable – but the upside is limited

In a market where All Nippon dominates, domestic services are much more remunerative in yield terms – for 3Q2009, a healthy USD19.64 cents (down 3.6% year on year), as against USD11.65 cents for international during this period.

However, there is a major shift appearing in ANA’s strategy over this quarter. The lower international yield was down a whopping 33.9%. 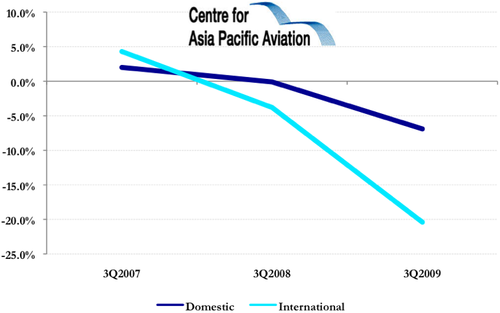 But, going against earlier complacency over load factors (which are very low by world standards), this slump in yield was partly offset by a load factor increase of more than 13ppts over the same period in 2008. 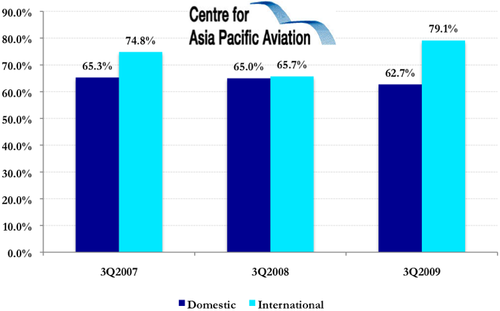 Another front on which ANA will now seek to entrench itself is in cargo carriage. The Okinawa hub operation, commenced in Oct-2009, has reportedly worked well. There will be continued focus on this (now-recovering) sector. According to the Plan, “by making cargo ANA's third core business we hope to both strengthen and build upon its success to date.”

For the nine months to 31-Dec-2009, the carrier carried 125,000 tonnes of cargo, a 15.3% increase. More importantly, nearly half of this was carried in the third of these three quarters, 54,000 tonnes. This was an increase of 54.8%, indicating ANA’s steeply increased focus on cargo in the latter part of the year.

The Outlook: JAL, and the good news and the bad news

As All Nippon’s Corporate Plan indicates, one piece of good news is Japan’s new open skies agreement with the US. This opens up more alliance possibilities. ANA’s membership of the Star Alliance has been very good for it, delivering strong domestic connections and opening up new capacity through codesharing on its European partners in particular.

To exploit the US bilateral expansion more fully, ANA is currently seeking anti-trust immunity for a full partnership with its Star Alliance partners, United Airlines and Continental, on US routes (See related report: US-Japan reach open skies deal. Star in box seat, battle for Japan Airlines to intensify), an application likely to be approved in coming weeks.

Perhaps not such good news is the likely transfer of JAL’s allegiance from oneworld into the bigger SkyTeam grouping, which would deliver it a partnership with the very powerful Delta. If that team also receives anti-trust immunity from the US authorities, it will greatly strengthen JAL’s penetration of the US market, without the need to allocate its own metal to the routes. This will also have an impact on JAL’s on-carriage in the Japan domestic market, which will hurt ANA.

And there are other, potentially negative impacts from the JAL bankruptcy and hoped-for revival. There is the potential that JAL (and other partners, as well as competitors) will begin a discounting war, to re-establish JAL’s position and recover passengers who had become nervous about buying onto a failing airline – not to mention the potential fallout for its existing frequent flyer loyalty programme customers.

Then there is the (LCC) elephant in the corner…

The near-explicit government support of JAL’s interests in the past, with officials moving relatively freely between employment on either side, has meant a protective approach to anything the flag carrier saw as a threat. Also a negative in many ways for JAL, as it thereby avoided many of the tough decisions it should otherwise have made, this did often tend to help the more efficient ANA. The lower cost operator was able to flourish in the closed environment that was perpetuated in this way.

But one outcome of JAL’s demise is that policy changes will now become more likely. For that, read liberalisation. There are many in the Japan Civil Aeronautics Board (JCAB) who have been agitating quietly for more open access at many levels of the industry for some years now. Their voices are likely to become more influential.

And one area where that more liberal approach is likely to be felt is in creating a more welcoming environment for low cost airline operation – something that would have an effect on the Japanese airline (and airport) industry that goes far wider than simple access deregulation.

The high costs built into the Japanese system have a lot to do with the entrenched positions of JAL and ANA, whose roles stretch far beyond merely providing air miles. It is their service companies whose facilities, nearly unavoidably, must be used by other startups. And then there are the mostly high-to-very-high charges levied by unnecessarily numerous and expensive airports scattered around Japan.

All Nippon has already revived its review team to look at the establishment of an LCC subsidiary. This is now an inevitable project and the sooner it is under way the better for ANA. A comparable subsidiary for JAL must surely also be a high probability.

Foreign LCCs, most notably Jetstar, are just starting to penetrate the medium haul market into Japan and AirAsia is currently seeking to establish a joint venture there.

The future of north Asian LCCs: joint ventures and alliances

This form of JV, side-door liberalisation, approach is vital to the growth of the low cost industry in Asia (this involves an existing operator forming a minority – ideally 49% - joint venture with local interests, thus allowing the new airline to conform technically with the requirement for “substantial ownership” to be locally based). One test of Japan’s willingness to open up its tightly regulated market will be whether it accepts this evolution.

Another feature of Asian LCC development likely to develop is of alliances between low cost airlines. At last week’s low cost airline conference in Singapore, there was much discussion of the concept, both publicly and privately. A high profile joint venture between Jetstar and AirAsia announced in early Jan-2010 adds some credence to the likelihood of this occurring.

So, despite there being no specific mention of the low cost goal in ANA’s Corporate Plan, it is inconceivable that a low cost subsidiary is not in the immediate planning stage.

It will be a pity for the Japanese airlines, JAL and ANA alike, if they sit back while foreign airlines show them how to do what they have so far failed to do. That is, exploit the massive low fare upside in the Japan international market.

For ANA, this alone will not give the momentum that the carrier needs to take full advantage of the perhaps-temporary weakness of its biggest competitor. But overall, the theme for the future must be to be looking outwards. International routes are the future growth – and profitability – markets for Japan’s airlines.