Asian airlines are expanding partnerships and collaboration with new hubs. Following Singapore Airlines' expanded partnership with Turkish Airlines and Cathay Pacific's with Qatar Airways, All Nippon Airways – now Japan's largest international carrier – is likely to open a service from Tokyo to Istanbul and deepen its partnership with fellow Star carrier Turkish Airlines. This would be the first Japanese service to Turkey, complementing those from other Asian countries including Korea, Malaysia and Singapore. It would also be the first strategic partnership between a Japanese carrier and an airline from a new hub in Turkey/the Gulf.

The rationale is clean cut. Turkey has become a popular tourist point for Japanese passengers, who would pay a premium to fly on a Japanese carrier to Istanbul. ANA can use Istanbul to open new destinations in Eastern Europe, the Middle East and Africa that it and competitor Japan Airlines cannot reach but Middle East Gulf carriers can.

ANA's challenge is tapping these new markets while sustaining its important relationship with the Lufthansa Group, whose seven daily flights to Japan are under a JV with ANA. An expanded Turkish Airlines partnership would have sensitivity in its overlap with Lufthansa, which has recently very publicly terminated most of  its cooperation with Turkish as the fast growing "fourth Gulf airline" increasingly challenged its hub role.

Approximately 200,000 Japanese – or 550 every day – visited Turkey annually between 2010 and 2012, according to Turkish tourism statistics. The figure dipped to 175,000 in 2013, but this is still significantly up from the 100,000 Japanese visitors to Turkey in 2002. There are no details on how many arrived directly from Japan or were visiting multiple countries.

Japanese arrival numbers to Turkey are similar to Canadian and Korean arrivals to Turkey, with Korea overtaking Japan in 2013. This is despite Japan's significantly larger population - some indication of further stimulation potential should ANA open an Istanbul service.

Both Canada and Korea have flights from local carriers to Turkey. Air Canada in the peak of northern 2014 summer will operate six weekly 767-300ER flights from Toronto to Istanbul, although this drops to three weekly in northern winter, according to OAG. Asiana operates five weekly Seoul-Istanbul A330-300 flights while Korean Air has five weekly 777-200ER flights. Asiana has very limited domestic codeshares with Turkish Airlines from Istanbul, according to OAG. 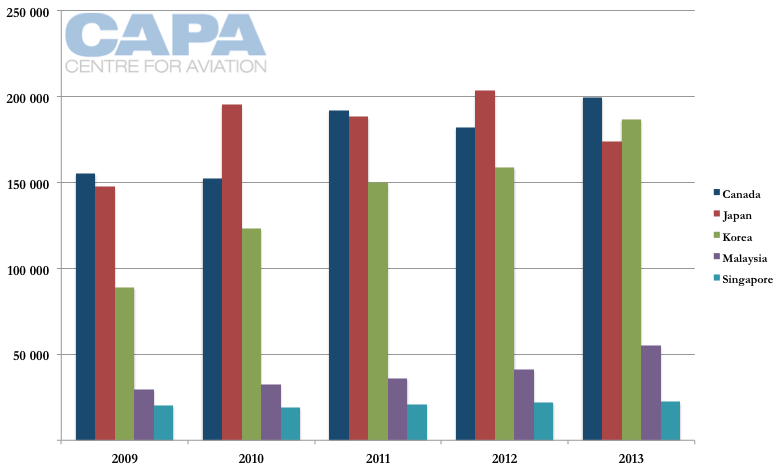 There are significantly fewer Malaysians and Singaporeans visiting Turkey despite Malaysia Airlines and Singapore Airlines flying to Istanbul, although the two carry connecting and sixth freedom traffic, distorting figures. With two non-Star Asian carriers serving Istanbul (oneworld's MAS and SkyTeam's Korean Air), ANA should have good prospects in Istanbul considering the larger size of Japan as well as the fact no other Japanese carrier serves a Turkish destination.

There is opportunity for market stimulation, as evidenced by a comparison with Korea. Korea's consumer market is similar to Japan's in that there is a very high preference for local carriers and passengers will pay a premium to fly a Korean carrier. As Asiana and Korean Air started service to Turkey and expanded, the number of Korean visitors to Turkey grew too. There is a looser correlation with Turkish Airlines' capacity: between 2010 and 2011 its seat capacity grew by 68% but Korean visitors grew by only 22%.

That expanded capacity has been absorbed in more recent years as Asiana and Korean Air kept their Turkish capacity flat. With Turkish Airlines not benefitting from an open skies agreement with Japan (nor do Gulf carriers have open skies with Japan), ANA could serve pent up demand. 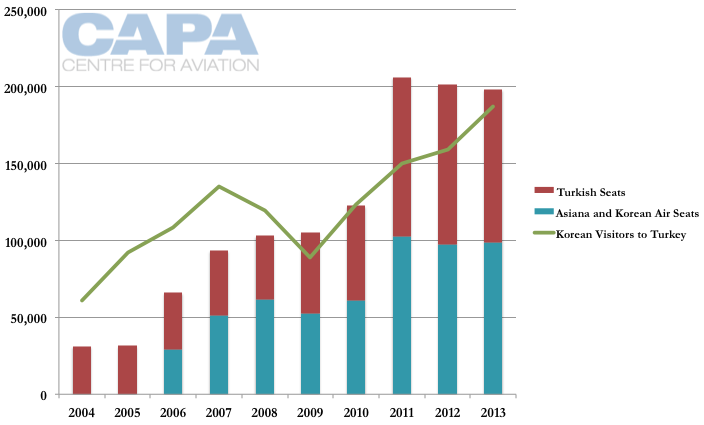 Turkish Airlines in northern summer 2014 operates three daily flights to Japan: two to Tokyo Narita (daily A330 and 777) and one to Osaka Kansai (A330). It was only from Mar-2010 Turkish was permitted to fly more than four weekly flights to Tokyo Narita. As is typically the case, liberalisation is greater outside of Tokyo. The last public comment on Turkish Airlines' flight permissions said Turkish was permitted to fly 21 weekly flights to points other than Tokyo.

In May-2014 Japan permitted Turkish Airlines to operate one daily return service from Tokyo Haneda using late night/early morning slots. Turkish Airlines would need to adjust its service to fly to Tokyo Haneda, the preferred downtown Tokyo airport. Turkish has a service departing Narita at 22:30, within the realm of the Haneda restrictions, meaning Turkish could move that service to Haneda (or create a new service at Haneda to grow overall Tokyo capacity). However, Turkish's inbound service to Narita arrives at 18:30, well outside the Haneda restrictions. Turkish would need to shift its service, which could limit ground access in Tokyo as well as Istanbul connections. 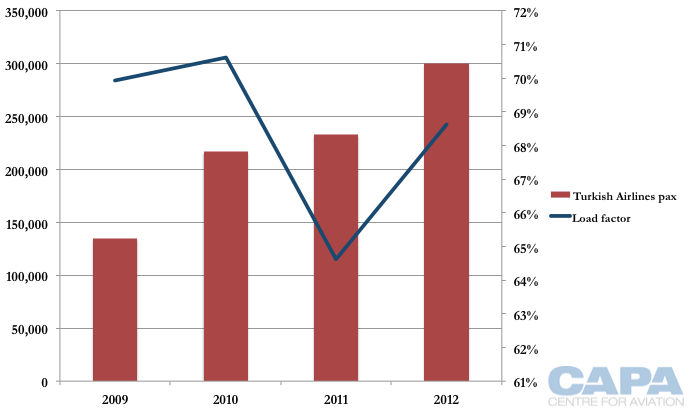 ANA partners with Turkish Airlines to the Middle East

ANA already has a limited partnership with Turkish Airlines. ANA codeshares on Turkish's three daily Istanbul-Japan flights as well as to three beyond destinations from Istanbul, according to OAG. These three are all in the Middle East: Abu Dhabi, Bahrain and Dubai. ANA does not codeshare on Lufthansa's services to these three points, although Japan to the Middle East via Istanbul would be highly circuitous, more so than Japan to the Middle East via Istanbul (which is already 50% longer than Tokyo-Dubai non-stop).

But the opportunity for an ANA service to Istanbul and beyond connections with Turkish Airlines are not so much about the Middle East. ANA would theoretically have more direct routings to Eastern Europe. Turkish Airlines serves 37 Eastern European destinations from Istanbul compared to Lufthansa's 38 from Frankfurt, Munich and Dusseldorf (to which ANA operates a non-stop service). Lufthansa has higher frequency.

A strategic partnership between ANA and Turkish would open Africa up to ANA. Turkish serves 29 African destinations to Lufthansa's nine. Africa is a small market to Japan, with Japan reporting approximately 27,000 African visitors in 2013, up from 20,000 in 2004. This is a small number amounting to about 70 visitors a day, but is arguably significant given the lack of connections. 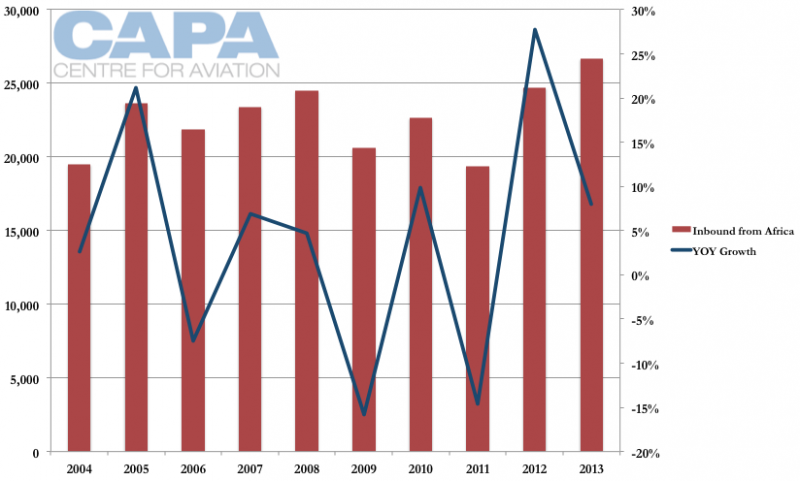 There are no longer non-stop flights between Africa and Japan follow EgyptAir's suspension of Tokyo in Jun-2013 and Osaka in Oct-2013. EgyptAir blamed the yen's devaluation and then Japan's travel warning to Egypt, although EgyptAir told CAPA in Jun-2013 that most of the passengers on its Japanese routes were transit passengers.

Further, Africa-Asia services are limited. OAG Traffic Analyser estimates the three largest carriers in the Africa-Japan market in the year to Mar-2014 are Emirates with a 28% share, Qatar with 15% and Air France with 13%. Johannesburg, Casablanca and Nairobi are the largest markets, according to OAG. Overall South Africa accounts for 15% of the Africa-Japan market. The figures are similar for the Japan-African market.

South African Airways serves two North Asian points, Hong Kong and Beijing, but both are loss making. The carrier has specified Beijing losses at ZAR309 million (USD28 million) per annum, but the route is unlikely to be cut due to the political ties. There are no such ties between South Africa and Japan that would see SAA mount a Japanese service.

The fragmented nature of the African market makes a hub ideal. Kenya Airways or Ethiopian have a more geographically advantageous hub than South African Airways, but likely lack the point-to-point and premium traffic to sustain a service.

OAG Traffic Analyser estimates that approximately 42% of Turkish's Istanbul-Japan passengers originated in Istanbul in the year to Mar-2014. The source markets comprising at least 2% of Turkish's passengers on Japanese flights are Rome, Tel Aviv, Paris CDG and Barcelona. Turkish's 20 largest source markets for its Japanese flights comprise 60% of connecting traffic. Of these 20 markets, only eight are not in Western Europe.

ANA can have stable Japan-Turkey point-to-point traffic, but it will also need connecting traffic to fill its cabins, especially premium ones as the Turkish market is mainly a leisure one. ANA could source new markets that would not overlap with its Lufthansa JV, but the trade off could be lower yields and higher cost to penetrate a large number of small markets.

Given the scope of the ANA-Lufthansa joint venture, ANA may need to sacrifice some opportunities from Istanbul in order to keep its much larger Lufthansa relationship stable. There is always give and take in a relationship, and it is rare for airlines to achieve an ideal situation. But there is no doubt where the upside growth potential lies.

However, at the same time Lufthansa is considering a joint venture with Air China. This could potentially see some small beyond Japan traffic, which currently goes through an ANA hub, go through an Air China hub instead. But the Lufthansa-ANA JV is heavily focused on Japan as the origin or destination and not transfer hub. Lufthansa may have more to lose than ANA as their partnerships develop with competitors. It is very unlikely for any strains in the Lufthansa-ANA relationship to approach the levels of the Lufthansa-Turkish relationship.

The main outstanding matter is how Japan Airlines can gain access to these markets, should it choose to do so. JAL and Emirates have had a partnership, but JAL seems more likely to follow its alliance lines and look to new oneworld member Qatar Airways. JAL is codesharing on Qatar's new Haneda-Doha service, but no points beyond that. Alliance expansion (and complexity) across Asia continues.