Japan is aviation's fifth largest domestic market after the US, China, India and Indonesia. Unlike those four countries with sustained growth, Japan has an economy that has undergone deep highs and lows while addressing substantial questions about future existence.

Despite this, in Japan's domestic market in its most recent financial year (the 12 months to 31-Mar-2018) there is forecast to have been record traffic as the market conservatively handles 100 million passengers.

Although Japan has more airlines, including LCCs, competition is restricted as most operators belong to the dominating ANA and JAL. CAPA's LCCs in Northeast Asia Summit in Seoul in Jun-2018 will gather industry leaders, including from Japan's airlines, to discuss domestic, regional and long haul markets. 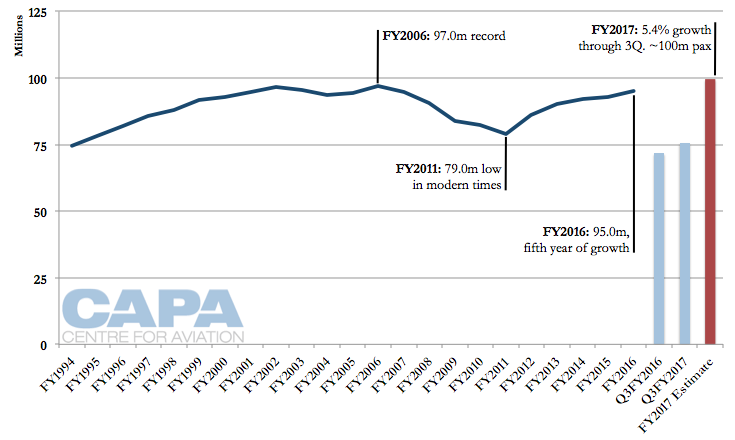 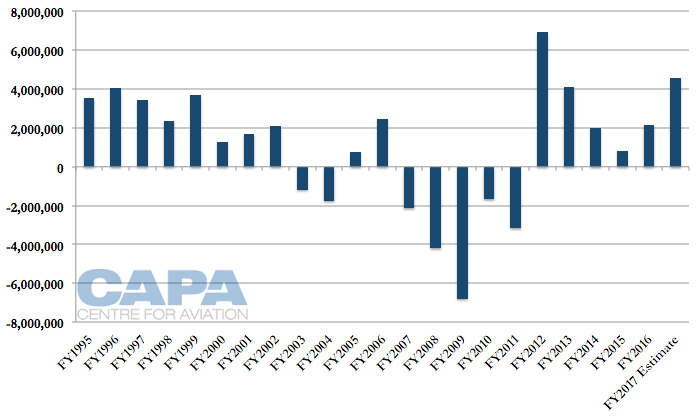 Japan's domestic market has changed over 12 years in a strictly quantitative evaluation, but effectively the market remains under the domination of ANA and JAL.

The next series of analysis looks at Japanese domestic market share in 2006 (the previous peak), 2012 (the start of LCCs) and 2016 (most recent full year data). 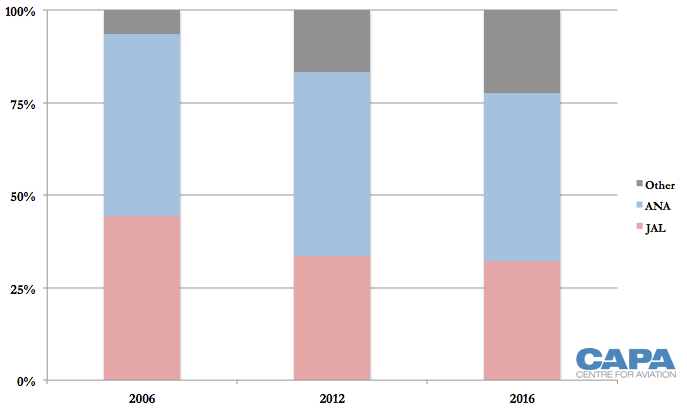 Japan's other airlines have made not only market share gains, but also significant increases in total volume.

Airlines outside the ANA and JAL brands carried 6 million passengers in 2006, 14 million in 2012 and 21 million in 2016. 2016's volume throughput from airlines other than ANA or JAL is equivalent to two thirds the size of JAL or half the size of ANA. However, this group of airlines is highly fragmented – and many are affiliated with, or partially owned by, ANA.

Over the decades Japanese aviation policy has sought to generate competition, but the Japanese domestic market is still almost exclusively a market for ANA and JAL. While more airlines have launched and grown market share, most (Air Do, StarFlyer, Solaseed) fall under the umbrella of ANA.

Japan still seeks a "third arrow" competitor to ANA and JAL. Skymark was to be the "third arrow", but slow development and bankruptcy have set it back. Although Skymark has minority ownership from ANA, it has fiercely held back ANA's efforts to influence and control.

AirAsia Japan looks to be the only independent LCC of scale. Of the existing LCCs, Jetstar Japan, Peach and Vanilla belong to ANA or JAL. Spring Airlines Japan has reduced its size and focused on the Japan-China market for its mainland Chinese (partial) parent owner. AirAsia Japan's local investors are not airlines, but AirAsia Japan has lost time to make up for. The AirAsia Group is not as aggressive as it once was – and that may be a good thing globally.

The Japanese domestic market's growth and reaching of new levels has in many ways defied the odds, especially from underlying economic changes. This is ultimately good for consumers.

Yet compared to other markets that have rebounded and reached new records, there has not been substantial change in competition.

Market share of the two flagship airlines has decreased. There are lower-fare options from LCCs, and tactical sales (and load factor increases) from major airlines. But Japan's domestic disruption has been controlled, with resulting small benefits compared to more open competition. AirAsia Japan's struggle to launch will make prospective new entrants think twice.

It is a big ask for the status quo of airlines and policy to change. Even the practical and smart options for Skymark to move upmarket may not be achieved. Even if all this is to stay the same, Japan could benefit from greater efficiency from airlines, airports and regulators. Some features of the conservative mindset are for legacy reasons, others to create a safety framework well above any international standard.

Unlike other markets that have grown, restructured, experienced the entrance and exit of airlines and the wide-spread change of business models, Japan is still operating in a familiar bandwidth.