American-US Airways merger; high noon showdown with the US DoJ

American Airlines, US Airways and the US Department of Justice (DoJ) have approximately two months to sharpen their arguments supporting and opposing the merger of the two carriers after the DoJ dropped its bombshell in Aug-2013 with a lawsuit to block the merger entirely. In this it was supported by several state administrations, including that of American's home base in Texas.

The airlines have succeeded in their quest for an early trial date in Nov-2013, against DoJ’s request to delay until Feb-2014. Now that a firm date has been established speculation is rising that a potential settlement between the parties may be reached prior to their day in court.

But if those theories fail to materialise, then each side faces the formidable tasks of convincing a judge that their respective arguments are correct. It is a high-stakes gamble for each of the entities, and while popular industry opinion is heavily weighted towards the opinion that the DoJ’s argument is illogical, the final judgment is tough to predict. Meanwhile, the outside world continues to turn and the would-be merger airlines must continue as if it were business as usual.

Formal responses filed by American and US Airways to the DoJ’s complaint largely stuck to the message the carriers have trumpeted all along (once American’s resistance to merging finally dissolved) – that the combined network will provide a formidable force against United and Delta while opening up a raft of new route possibilities to consumers.

Not surprisingly, the carriers claim that the DoJ’s basis for opposing the merger is built on a skewed and incomplete analysis that ignores the current realities of the airline industry. In particular, US Airways stated that while it is currently achieving profitability, it has lost USD3.4 billion during the last 12 years while American’s losses have reached USD10.3 billion during that time. American also counters that while its revenue growth “outpaced industry growth by one measure in parts of 2012”, its revenues have underperformed industry growth in 2013.

If recent history is any indication it is not a certainty that a merged American and US Airways operating as the new American would hit a consistent financial stride during the first couple of years.

United (the product of United and Continental) during 2012 recorded unit revenues below the US industry average for most of 2012, and has stated that reaching the promised USD1.2 billion in estimated merger synergies could slip into 2014, roughly four years after the merger was announced. The carrier has regained some unit revenue traction during 2013, but is still lagging in its financial performance, earning just USD52 million during 1H2013.

Net income of top US carriers by traffic share: 1H2013

One element of DoJ’s arguments against the merger that has sparked the harshest criticism from industry observers is its focus on how competition on connecting service would be jeopardised if American and US Airways are allowed to proceed with their merger. American argues that DoJ’s complaint cites the existence of more than 1,000 overlapping routes between the two carriers that have high so-called “HHI” numbers. The Herfindahl-Hirschman Index is a tool DoJ uses in analysing market concentration when it evaluates airline mergers, with markets rating higher than 2,500 points deemed highly concentrated.

In arguing that DoJ’s complaint essentially has no merit, American believes the department’s focus on “more than 1,000” overlapping routes that scored high on the HHI index is misleading. Of the 623 domestic non-stop routes operated by American and US Airways, there is competition between the two carriers on 17 non-stops, with most of those overlaps being served by other carriers including Southwest and low-cost airlines JetBlue and Spirit. The remaining 994 are one-stop connecting routes that American claims represent a mere fraction of the 13,000 operated by it and US Airways.

Taking a snapshot at one of the one-stop markets that netted a HHI score above the 2,500 point baseline, it could be argued that ample one-stop service would remain post merger, albeit possibly through a different hub.

The Charlottesville, Virginia-Omaha, Nebraska pairing scored a HHI rating of 5,087 according to DoJ’s analysis. Current schedules in Innovata show that presently direct flights are available from Charlottesville to US Airways’ hubs in Philadelphia and Charlotte, American’s hub in Chicago O’Hare, Delta’s Atlanta and New York LaGuardia hubs and to United’s hub at Washington Dulles.

Connecting flights are available in all those markets except for Philadelphia and Washington Dulles. While there might be some risk in service being cut from Charlottesville to either Charlotte or O’Hare, the airlines argue passengers will still have access to Omaha through one of the new American’s hubs. And while that may increase fares in the connecting market from Charlottesville, two major competitors will remain.  That in turn might lead to a higher competitive concentration, but American maintains that the number of non-stop and connecting markets between it and US Airways is comparable “to those transactions that the DoJ only recently agreed would increase competition”.

American also points out that on almost half the routes cited by DoJ, it and US Airways carry less than 10% of the passengers in those respective markets, and once the merger is complete, “almost 90% of the passengers on these routes will continue to be served by at least three airlines”.

The judge needs to decide the competitive implications for connecting markets

As the arguments unfold each side will manipulate all available data to prove their respective points. But DoJ could be at a slight disadvantage given that it has not had such a concentrated focus on connecting routes during its reviews of the mergers between United-Continental and Delta-Northwest.

From a pure legal perspective DoJ’s argument is being challenged on the grounds simply that the department has abandoned previous precedent in its antitrust review of the proposed merger between American and US Airways.

But there has undoubtedly been a change in the operating environment in the US with four major airlines already consolidated to two. As a recent article in law360.com highlighted, DoJ could argue that with two large airline mergers complete, it now has the ability to look back and apply the benefit of hindsight in evaluating a further combination. And, as Texas attorney general Greg Abbott reiterated in Advocate Digital Media on 7-Sep-2013, the airlines have been their own worst enemy in this respect.

Explaining his reasons for joining suit with the DoJ, he points out that: "The legal action is based on evidence such as internal emails, investor presentations and other comments by top executives of the airlines. Those documents reveal their thinking about how shrinking competition in the airline industry — and, hence the merger — will allow the airlines to pile even more bag fees, ticket change fees and increased fares on customers...The merger would allow the new company to ... distort the marketplace — while harming competition for nearly 200 Texas routes."

Even as the outcome of the case could be decided by year-end, the DoJ’s challenge meanwhile leaves American and US Airways in limbo as the delay pushes back the start of network optimisation – especially in the lucrative international market place.

And should the DoJ prevail in blocking the merger, each carrier will need to carefully re-work their international strategies going forward. American – a cornerstone partner of the oneworld alliance – obviously stands in a better position than US Airways as it could feasibly partner with all three of the powerhouse Gulf carriers – Emirates, Etihad and Qatar – that are all planning significant expansion into the US during the coming years. US Airways will be left to manage a much smaller international network that will ultimately produce inferior yields.

While the argument that consolidation ultimately creates a more rational industry may be sound, mergers are clearly not a panacea for the industry’s ills, as evidenced by the painful integration process that in some ways is still plaguing United.

The US industry needs to complete a full business cycle free from Chapter 11 reorganisation and with the new reality of higher labour costs to prove conclusively that the fundamentals of the business have changed for good. Until then, an industry whose participants are high cost compared with many foreign airlines, is still under the spotlight.

Now it is up to a judge to decide if consumers will benefit more from the larger scale a combined American-US Airways would create with respect to their major legacy competitors, or conclude that the tie-up would create too much concentration in the hands of three major US carriers.

DoJ has largely overlooked the opportunities that consolidation has created for bottom feeders like Spirit and Allegiant (and amid suggestions of a reformed Frontier Airlines) in backfilling some service cuts that occurred as a result of the mergers during the last few years; it also ignores the fact that Southwest is the third largest carrier in terms of US market share.

Admittedly the future role of the ultra-LCCs must remain speculative for the time being, but if the court is to render a fully formulated decision the influence of those carriers on pricing – whatever the degree – should be considered as it evaluates the merits of each argument. 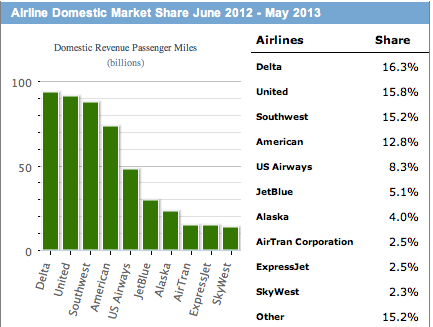 If American and US Airways do emerge successfully, they will still face an uphill climb as United will be further along in its integration and Delta will continue to enjoy the favourable competitive gap it has created from its US legacy peers by having several years of a merger integration behind it.

Based on the complexities inherent in merger integrations, tussling with the DoJ could be the easiest leg of the journey. But that obstacle is still over the next hill.