Alaska Air Group is furthering its stated goal of network diversification into longer-haul markets during 2012 with the introduction of five new US transcontinental flights along with new service to Hawaii, a market the carrier has been growing in intensely during the last few years. The expansion contributes to Alaska’s calculation of an ideal growth rate of roughly 6% annually, and for the moment the company does not foresee a need to adjust those estimates.

So far this year Alaska has inaugurated mainline flights from its Seattle hub to Kansas City and Philadelphia, Pennsylvania. In Aug-2012 the carrier is launching its highly anticipated route from its Portland, Oregon hub to Washing National followed by new service from Seattle to San Antonio, Texas in September and the debut of its San Diego-Orlando service in October. Changes in Alaska’s Hawaiian network include new flights from Portland to Kauai and expanded service from San Jose to Kauai and Kona to daily from three-to-four times per week.

Alaska also re-started flights from Portland to Long Beach in Mar-2012 operated by its regional partner SkyWest Airlines, and also expanded its intra-California service operated by Horizon Air from San Diego to Fresno, Santa Rosa and Monterey in Jun-2012.

The company remains virtually unchallenged in most of those markets with the exception of Seattle-Philadelphia, which is flown by US Airways, and Seattle-Kansas City, where Southwest offers flights. Frontier ended its Seattle-Kanas City offering earlier this year as part of broader cuts from Kansas City that included Milwaukee, Houston, Los Angeles and San Francisco. 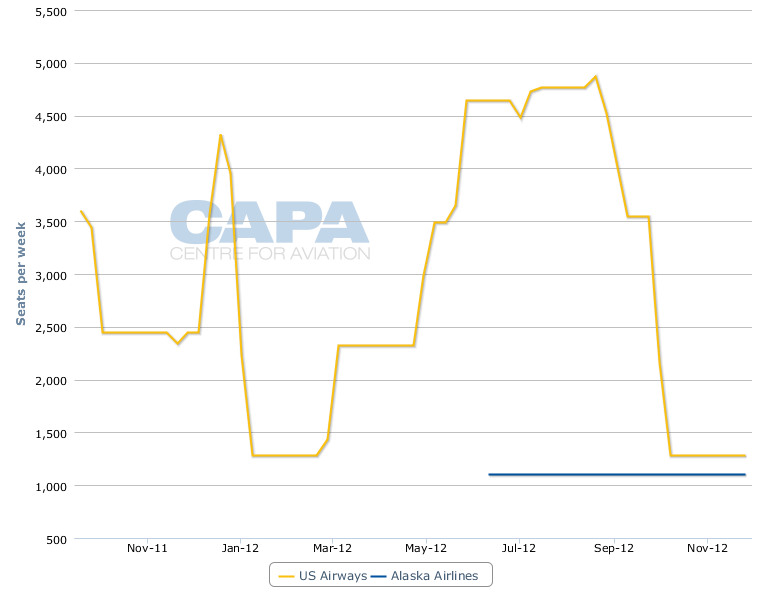 Alaska peaked with 1204 one-way weekly seats in the Seattle-Kansas City market during 20-May-2012 to 26-May-2012 before dropping to steady-state of 1099 seats. Alaska still accounts for 53% of the weekly capacity in the pairing, while Southwest’s 959 seats account for the remaining 47%. 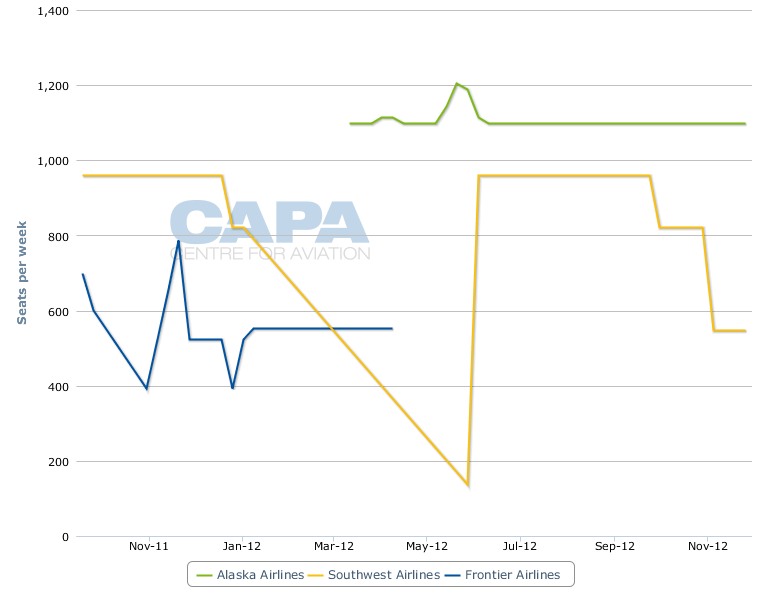 Alaska is offering a USD99 lower fare than Southwest from Seattle to Kansas City for roundtrip travel from 11-Jul-2012 to 13-Jul-2012. Alaska’s lowest fare is USD428.60 compared with USD527.60 for Southwest. Since its flights only began in Mar-2012, Alaska is somewhat undercutting Southwest’s prices in the market to build both brand awareness and bolster its load factors on the new route. Southwest accounts for 48% of the weekly capacity from Kansas City, which means it any passenger spill to Alaska could be absorbed in larger markets where Southwest is dominant including Denver, Chicago Midway, Dallas Love Field, St Louis and Las Vegas. 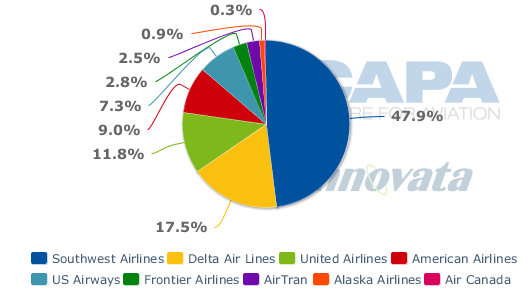 Alaska’s new service from San Diego to Orlando beginning in Oct-2012 marks the carrier’s first US transcontinental flight from the southern California city. San Diego officials have remarked Orlando was the largest market from the airport without non-stop service, and now Alaska has moved to fill that void.

Alaska has been building its presence in San Diego during the last couple of years, launching long-haul flights to Kahului in 2010 and Honolulu in 2011. It also serves its Portland and Seattle hubs from San Diego along with flights to the Mexican destinations of Puerto Vallarta and Los Cabos. The intra-California flying by Horizon to Fresno, Monterey and Santa Rosa debuted in 2012.

The carrier is shielded from competition in every one of its markets from San Diego, with the exception of Honolulu, which is served by Hawaiian Airlines. Alaska’s flights from San Diego to Kahului reflect its strategy of shying away from serving the Hawaiian islands from the larger California markets of Los Angeles and San Francisco. Alaska’s network from California to Hawaii is centred on flights from Sacramento, Oakland, San Jose and and San Diego. 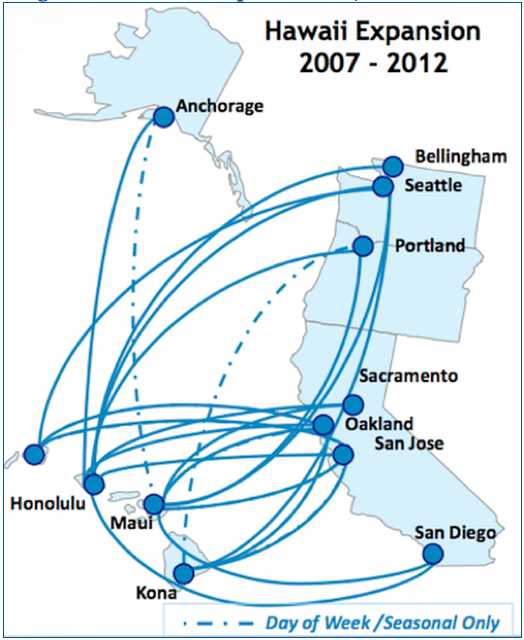 Alaska has made a significant push into Hawaii from the US pacific northwest during the last few years, seizing on an opportunity to fill service gaps created by the demise of ATA and Aloha Airlines around the same time period in 2008, and its Hawaiian markets account for roughly 20% of the carrier’s capacity. But so far in 2012 Alaska seems to have a focus on US transcon expansion, reflected in the new routes to Philadelphia, Kansas City, San Antonio and Orlando.

The new service from San Diego to Orlando could set a precedent for Alaska to make a new push from California into transcontinental markets. Up to this point the majority of Alaska’s long-haul transcontinental operations have stemmed from its Seattle and Portland hubs. Alaska does offer daily flights from Los Angeles to Washington National airport. (See Background information.)

Alaska currently offers service from its Seattle hub to Orlando, giving the carrier an already established presence in the long-haul market to Orlando. The carrier is shifting its Miami-Seattle pairing to nearby Fort Lauderdale, which currently has no service from San Diego. Fort Lauderdale could be a logical market for expansion if the Orlando market returns positive results for Alaska.

Alaska could be close to reaching the limits of its growth to Hawaii, and is now foucssing on opening new transcontinental markets. Shortly after unveiling a 28-Aug-2012 launch date for its new Portland-Washington National service, Alaska CFO Brandon Pedersen said the route was consistent with the company’s growth strategy as transcontinental operations account for nearly 20% of the Alaska’s capacity. 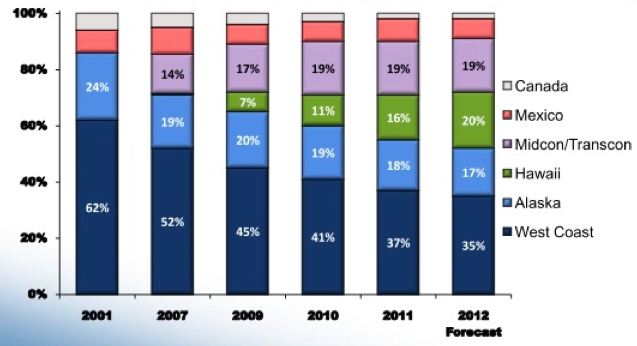 Network diversification away from the US west coast

While Alaska enjoys a strong presence on the US west coast, and its network in the region is essentially a feeder to codeshare partners Delta Air Lines and American, Alaska has made a push to Hawaii and other long-haul markets to avoid overexposure to one region and the pitfalls that can create in terms of facing competitive threats. As Alaska has network diversification through longer-haul flying, Virgin America during the last couple of years has entered the market to become a third competitor to Alaska and United on major west coast routes from Portland and Seattle to Los Angeles and San Diego. The network expansion Alaska has strived to achieve during the last few years has helped to offset some of the sting of Virgin America’s forays into Alaska’s mainstay markets.

Mr Pedersen recently siad that a broader network offering also helps Alaska do a better job of matching supply with demand, noting that during 1Q2002 the carrier’s mainline load factors were 65%. He attributed Alaska’s network expansion to a recored 86% load factor in 1Q2012, and quipped that as a CFO, “I like the notion of selling all seats onboard”.

Confident in average yearly growth of 6%

Alaska has a yearly growth target ranging from 4% to 8%, and concludes it can meet it goals of a 10% return on invested capital with an average of 6% growth. Mr Pedersen estimated that from 2012 through 2015 Alaska will add a net of 15 Boeing 737 narrowbodies, with one aircraft roughly equating to 1% of growth. He reasoned that translates into five new markets per year, and assured Alaska sees no challenges meeting that target. “Right now we think we have more opportunities than airplanes to serve,” he stated. Currently Alaska Airlines operates 210 Boeing narrowbodies and Horizon flies 48 76-seat Bombardier Q400 turboprops. 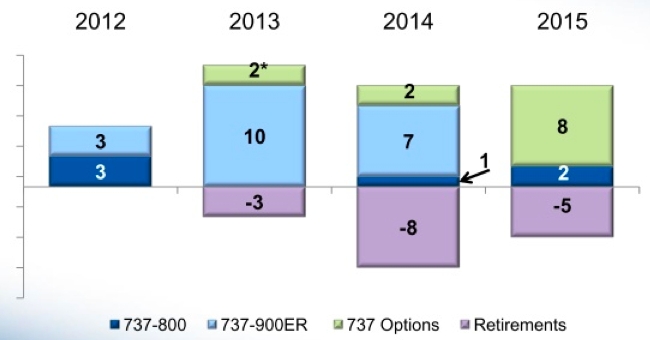 Source: Alaska Air Group
Note: Alaska expects to exercise two options for the 737-900ER in 2013. The 2013 returns include three 737-700s that are being sold and leased back under short-term leases.

If Alaska’s current service expansion pattern is any indication, the new markets will likely be in transcontinental markets where it can safely shield itself from limited competition. Mr Pedersen stressed that in order to sustain its planned growth Alaska needs to keep its costs moving in the direction of ultra low-cost carriers in order to offer low enough fares to support its planned growth. He acknowledged Alaska is mindful it rests squarely in the middle in terms of cost structure relative to the US industry. Noting that capacity growth among low cost carriers has grown 159% since 2000 while network carrier capacity has shrunk 33% during that time, Mr Pedersen said Alaska needs to move in the direction of low-cost carriers to fuel its growth.

As it moves to launch a raft of new transcontinental markets in 2012, Alaska seems well on its way toward its stated goal of becoming more of a national presence rather than a niche player on the US west coast. 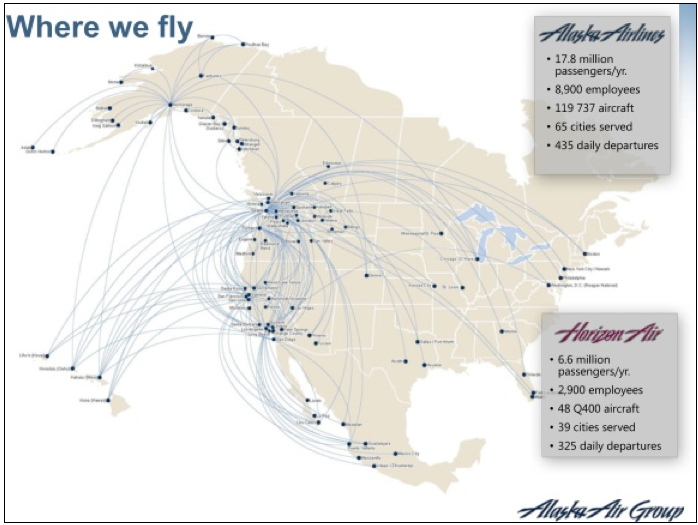