Shares in airports worldwide were mixed in trading on Friday (16-Oct-2009). Airports of Thailand led the way, rising 7.3%.

The operator of Thailand’s main gateways has been vocal about its focus on infrastructure development and expansion lately, although its share price has been volatile on mixed traffic reports by national carrier, Thai Airways.

Shares in Ferrovial, owner of BAA, gained 0.5% as the debacle surrounding the sale of London Gatwick commences. In the latest development, BAA is reportedly likely to sell London Gatwick to Global Infrastructure Partners as early as this week, for a reported sum of GBP1.5 billion. The airport has submitted plans to the local council for major infrastructure development, including extending its North Terminal and the construction of a multi-storey car park facility.

Meanwhile, BAA stated it will commence its appeal against the Competition Commissions order for the airport owner to sell three of its UK airport, including Gatwick, on 19-Oct-2009. 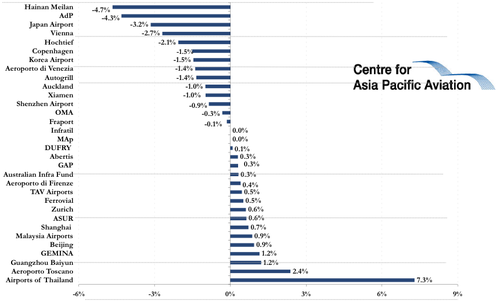