Thailand’s benchmark SET Index slumped 3.5% (its biggest one-day fall since mid-Oct-2009), with travel and tourism stocks among the worst affected.

Airports of Thailand slid 4.6%, while Thai Airways dropped over 6%. More demonstrations are planned, to challenge the Thai Government-declared state of emergency.

The Thai-Chinese Tourism Promotion Association stated China has cancelled 100 charter services (affecting more than 15,000 visitors) to Bangkok during the Songkran Festival, due to a declaration of a state of emergency in Bangkok. The cancellations will result in lost revenues of THB600 million (USD19 million) for Thailand. The UAE, meanwhile, advised its citizens to avoid travel to Thailand, while Malaysia and Singapore have also advised its citizens not to travel to Thailand.

It was a mixed day for airport and airport supplier stocks yesterday. BAA parent Ferrovial declined 0.9%, while AdP and Fraport fell 0.6% and 0.2%, respectively. Asian airport stocks were generally higher. 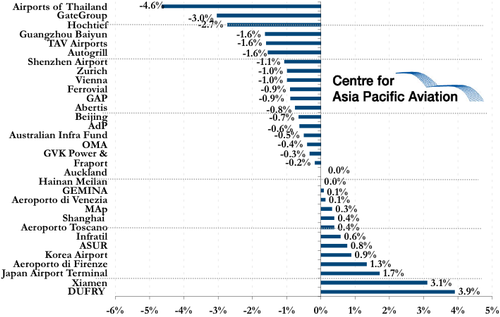