Airlines in Transition 6: Working with airlines & consumers (and Charlie Sheen?) to enhance revenues

Airline distribution expert Gillian Gibson, formerly of Travelport and Amadeus, led a session on distribution at CAPA’s Airlines in Transition conference in Dublin. She closed her presentation with a quote from wild man of Hollywood Charlie Sheen that refers to the power of the mind in overcoming old habits: “the only thing I’m addicted to right now is winning”.

The airline industry needs to change its mindset to overcome old habits and to develop technology to enable a more retail-oriented approach to distribution. Ancillary revenues have grown to the point where the very word ‘ancillary’ looks like a misnomer and yet traditional distribution channels such as GDS have not been able to carry this key revenue stream. Direct channels continue to grow, with mobile phone apps adding to airline.com sites, and yet very few offer an ‘end-to-end’ booking capability.

Can the industry break its old addictions and find a more integrated winning formula for distribution?

There has been a significant amount of innovation on airline websites, helping to stimulate ancillary revenues to exceed forecasts. IdeaWorksCompany and Amadeus estimate that annual ancillary revenues were worth USD36.1 billion globally in 2012, accounting for 5.4% of total airline revenues. The 2012 figure is up 11% on 2011 and up 60% from 2010. North America is the leading region, followed by Europe and Asia-Pacific.

For traditional airlines analysed by IdeaWorksCompany, the average percentage of revenue generated by ancillaries is 2.9%, while for major US airlines it is 10.1%. For so-called ‘ancillary revenue champs’, most of whom are LCCs, 19.7% of revenue comes from ancillaries. For other LCCs, the percentage is 7.2%.

According to IdeaWorksCompany, half of ancillary revenues for US major airlines comes from the sale of FFP miles, with baggage fees accounting for 20%. The remaining revenue is produced by an array of à la carte and commission-based products.

For traditional airlines outside the US, FFP miles are also important, accounting for 30% of ancillary revenues. But the same share is taken by travel retail items such as hotels, car hire and insurance. 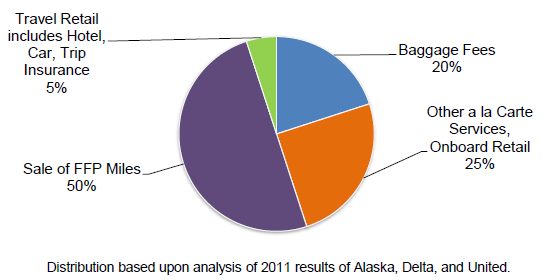 Key ancillary revenue components for traditional airlines outside the US

Are they really ‘ancillary’?

A dictionary definition of the word ‘ancillary’ describes its meaning as "providing necessary support to the primary activities or operation of an organisation, institution, industry, or system". Ancillary revenues are those that derive from anything other than a company’s main business.

However, with ancillaries now such an important revenue stream, accounting for 20% of revenues at Ryanair and easyJet, for example (and, outside the airline sector, 33% at mobile communications operator Sprint), is it right to call such revenues ‘ancillary’? “We need to think just of revenue. Seats are just one product – I don’t like the term ‘ancillary’,” says Jochen Schnadt, commercial director at UK leisure carrier Monarch Airlines.

Ryanair CEO Michael O’Leary once said that he would like to reduce ticket prices to zero and to generate all revenues from other products and services. While this may not be practical or likely at the moment, this comment points to a multi-product retail approach that, if properly executed, matches the provision of products and services to the consumer’s willingness to pay for them. This is a form of customisation, in which the consumer chooses which product elements to buy, just as other products in other industries can be customised, for example cars or trainers.

Jeremy Wertheimer founded ITA Software, which powers airfare searches on websites such as American Airlines, United Airlines, Southwest Airlines, Orbitz and Kayak, before selling the company to Google in 2011. Now head of Google’s travel team, he acknowledges the need for a customised product, but questions how far this should go: “economies of scale are important in keeping costs and prices down”. 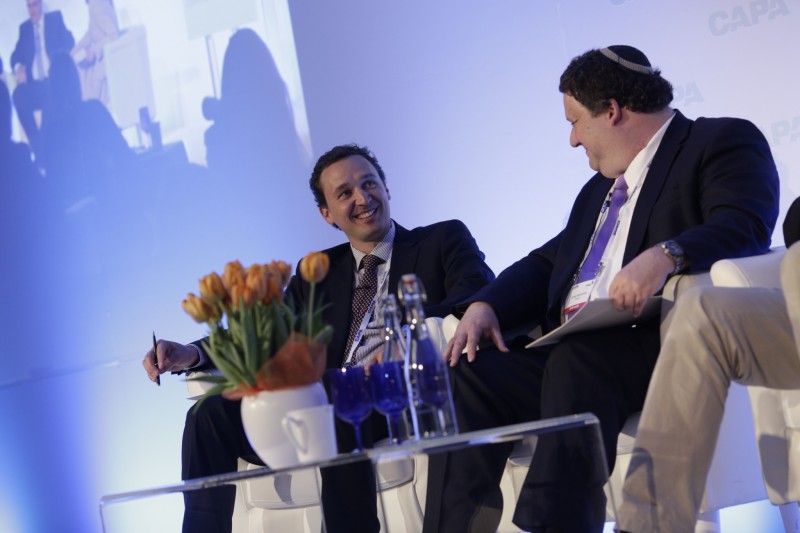 Unfortunately, airline ancillaries are currently confusing the retail experience for passengers, according to a recent survey of participants at a TNOOZ seminar on ancillaries. The problem is that “the consumer is not really at the heart of the business,” said Ms Gibson. 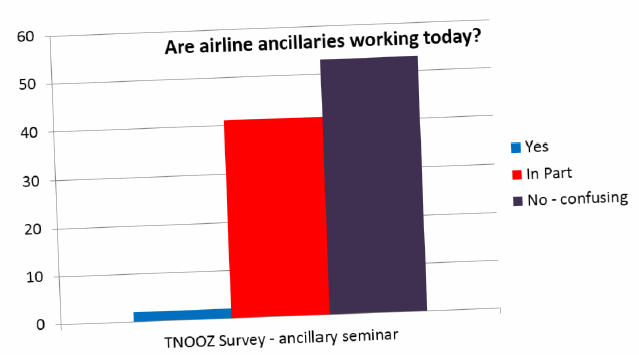 'Smart phones have everything we need for travel'

There is a significant opportunity in developing mobile channels as a way for airlines to reach the consumer. Ms Gibson noted that “smart phones have everything we need for travel and people make other purchases on smart phones”.

Given this opportunity, why are airlines not grabbing it with both hands? Ms Gibson compared the experience of using sites such as Expedia with airlines’ own websites. “Expedia has good content, saves you money – Expedia claims it is up to 16% cheaper – and receives favourable reviews. By contrast, airline direct channels are not a good experience,” said Ms Gibson.

The message from airline sites is confusing and generates mistrust in the mind of the passenger about the additional cost of booking any additional service such as bags, seat reservation, meals and on-line check-in.

'The importance of impatience'

Consumers need to be able to book their entire trip in an end-to-end booking, including lounges, the flight itself, hotels, tourist attractions and trains if necessary. Ideally, these elements should all be available in the same mobile app, which should be able to give an immediate response. Nobody, least of all the younger generation, wants to wait while a site pauses to think.

We need apps to be “tap-tap-buy”, said Ms Gibson, “it’s all about the importance of impatience”. She identified apps from Kayak, Google and Apple’s Passbook as being among the better travel apps, but questioned why it is still not possible to buy bag check-in or seat reservation on an intermediary website or app. There are also other hurdles between airlines and the consumer: “the equipment is not modern, IATA standards are restrictive, airline staff need to upsell more and the GDS is old technology,” said Ms Gibson.

'The airline industry has a disadvantage because it automated so early'

The technological limitations of the GDS, and airline IT in general, in enabling the industry to adopt a more consumer-focused and customised approach to distribution was a recurring theme at CAPA’s Airlines in Transition conference. “The airline industry has a disadvantage because it automated so early,” observed Google’s Mr Wertheimer. This fulfilled a need at the time, but old habits can prove addictive. Mr Schnadt holds that there are issues other than technology: “mindset, skill set and technology are all key”.

So, will IATA’s New Distribution Capability (NDC) improve things? The airline industry body itself is clear about its aims for NDC: “NDC will enable airlines to fill the capability gap between their direct and indirect channels, providing identical retail capabilities across all channels. It supports product differentiation and customer personalisation,” claims IATA’s briefing material.

IATA has engaged airlines, GDS, IT providers, TMCs and online travel agents in the initiative in order to encourage a collaborative approach. 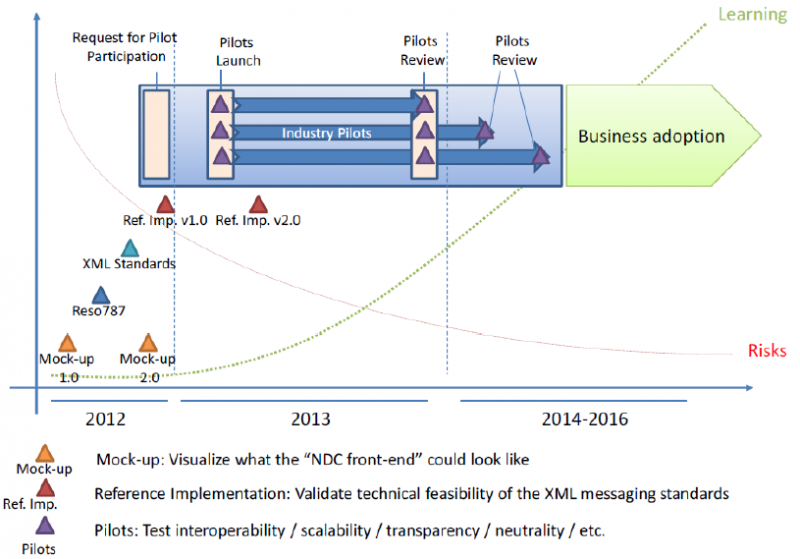 NDC is effectively a new standard for distribution, designed to make the relationship between customers and consumers interactive through all channels so that airlines know who is making a request and can personalise their offers. Airlines will construct the offers themselves and intermediaries will aggregate the responses.

Passengers should enjoy greater transparency of what they are buying, gain greater access to products and services and be able to compare offerings on many dimensions in addition to price. “NDC is pro consumer, pro competition and collaborative,” says Eric Leopold, Director, Passenger at IATA.

Resonating with IATA’s NDC initiative, Travelport announced its Travelport Merchandising Platform in Apr-2013. This enables airlines to distribute all products and services, including fares and ancillaries, across all channels and using whichever technology best suits them.

The Travelport Merchandising Platform has three main elements: first, ‘aggregated shopping’, available now, which consolidates within the same screen shopping results for traditional carriers who connect through ATPCO and those with an API connection; second, ‘ancillary services, available now, which enables travel agents to sell airline ancillaries within their existing workflow without navigating to the airline’s website; and third, ‘rich content and branding’, launching late 2013, which will enable airlines to associate wide product information and to communicate the value of their product through agents.

Travelport head of global supplier strategy Ian Heywood argued that, even in the age of direct sales channels, airlines need third party distribution in order to access wider markets. Previously, GDS had not kept pace with the requirement that third party distribution should reflect the same content that can be found on airline websites. “We need to enable airlines to distribute any way they want. Ancillaries should be available through all channels – not everyone wants to visit the website,” insisted Mr Heywood.

In the future Ms Gibson believes that, instead of arguing over who owns the customer, airlines, technology and distribution partners need to be working together. Monarch’s Mr Schnadt goes further: “Looking across the value chain, there are a number of consumer touch points: search, booking, post-booking, at the airport, boarding, in-flight etc. We need more creative solutions, to learn from other industries and to bring in people from other industries,” he said.

Airlines can learn from the experience of that man from another industry, Charlie Sheen, who once described himself thus: “I have one speed, I have one gear: go!”

If the airline industry really wants to wean itself off the bad habits of the past, thereby creating a multi-speed, many-geared approach to distribution, it must succeed with current developments such as NDC and Travelport’s Merchandising Platform.