LCC shares were mixed on Thursday (28-Jun-09), despite reduced oil prices. New York prices fell USD1.15 to settle at USD67.23/barrel, while in London, oil prices for September delivery fell USD 93 cents to settle at USD69.88. The reductions mark the end of a two-week rally in oil markets and reflects the further decline in US Consumer Confidence.

Jazeera and SkyEurope led the declines yesterday, both falling 3.6%. Also in Europe, easyJet gained 0.7% and Ryanair rose 2.8%, following Monday’s 8.3% decline linked the carrier’s revised profitability forecast. However, Citigroup saw Ryanair’s financial in a positive light, raising Ryanair from “hold” to “buy”, stating Europe’s largest LCC is “putting pressure on other low-fare carriers and flag carriers, which could cause some to reduce capacity or exit the business, as it exploits the recession to build market share.”

In the Asia Pacific, AirAsia's shares gained 5.3%, despite news that AirAsia X has been forced to delay plans to launch services to Sydney and Incheon, after the Malaysian Government deferred approval for the services. The government has requested parent, AirAsia, settle issues with Malaysia Airports Holdings Bhd (MAHB), involving the payment of approximately USD18.5 million in airport charges, before the new services are approved. AirAsia X is now looking into alternatives, including increasing capacityto the Gold Coast, Hangzhou and Taipei. Potential new destinations include Chengdu, Sharjah, Abu Dhabi and Bahrain.

Virgin Blue's shares remained suspended yesterday, prior to the release of the result of the carrier’s capital raise at the end of trading today. Meanwhile, Virgin Blue outgoing CEO, Brett Godfrey, stated the carrier is positioned in the “vast middle market” and will be well positioned when the economy recovers. Mr Godfrey added he believes V Australia will eventually be more profitable than Virgin Blue.

See related article: Virgin Blue: The New World Warrior under siege, as the guard is about to change 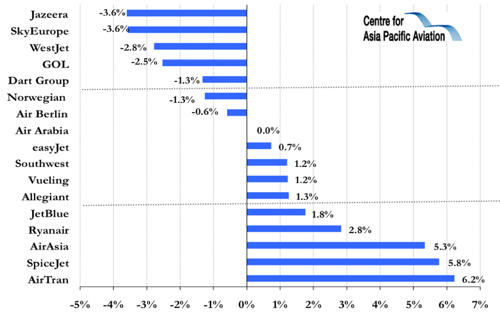