AirAsia X will shortly reveal its new base in the Middle East to expand its reach into Europe/North Africa and take the pressure off its congested Kuala Lumpur hub. CEO, Azran Osman-Rani, told The Centre, “we’re basically looking at using the Middle East/Gulf airport to launch one-stop services [from Kuala Lumpur] to Europe/North Africa”, adding “obviously, the airport we choose must allow full fifth freedom ‘beyond’ rights to make this work”.

A330 range from the Middle East 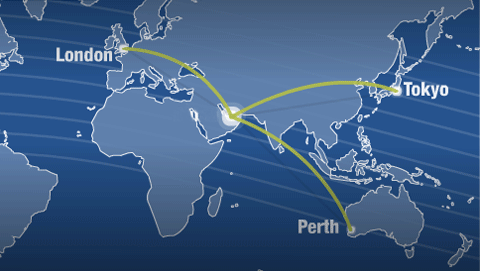 High aircraft utilisation rates are crucial to the long-haul LCC’s business model, providing it a significant cost advantage over its rivals. But increasing congestion at the Kuala Lumpur LCCT, which has not expanded as quickly as the AirAsia Group would like, has forced the carrier to consider other options. But there are also powerful strategic reasons for basing there. For example, short-haul low cost operations by the growing number of Gulf LCCs expands opportunities for connections into India and other Middle East destinations. This "connectivity: has been extremely valuable for AirAsia X in Kuala Lumpur, as well as London Stansted.

The Middle East, which continues to exhibit strong rates of traffic growth, represents a key opportunity for AirAsia X, suiting the range of its growing A330-300 fleet for services to destinations in Europe and North Africa.

Mr Osman-Rani explained, “instead of the plane flying back to KL, it may fly off to Europe/North Africa, and then back to Middle East and back to KL. It’s not a ‘real’ hub, in the sense that the aircraft will be based there [in the Middle East]. But it allows us to tap new markets (obviously ones where there are no direct services to Southeast Asia) and to keep the aircraft out of KL, so that we reduce potential parking space congestion at the KL LCCT”.

Mr Osman-Rani added an announcement would be made “in a couple of weeks’ time” about the airport to be used.

AirAsia X yesterday announced plans to add two weekly frequencies between Kuala Lumpur and Australia's Gold Coast for a total of six from 21-Oct-2009, to cater for increasing demand. The carrier reports an almost 15% year-on-year increase in passenger traffic there in 1H2009.

Mr Osman-Rani stated the Gold Coast had proved to be “an enduring route for the airline”, which now also operates to Melbourne and Perth. The carrier had been seeking rights to launch services to Sydney, but the Malaysian Government turned down its application.