Shares in Southeast Asia’s largest LCC AirAsia gained 5.3% yesterday after MIDF Research revised its full year earnings upwards by 26.9% and placed the LCC’s shares on a ‘buy’ call with a target price of MYR2.88.

MIDF Research stated it was "extremely positive" on AirAsia's 2011 outlook, due to expectations of higher revenue growth. In its research note on Wednesday, MIDF Research among others, viewed the listing of Thai AirAsia and Indonesia AirAsia to be positive for the company. Citigroup also increased the carrier’s stock rating from MYR2.50 to MRY2.85.

China Southern led airline stocks higher in Shanghai after it stated nine-month profit probably rose more than 15-fold. The airline rose 1.8% to CNY11.45 at the close of trading after earlier gaining as much as 8.1%. China Eastern Airlines climbed 2.2% to CNY8.97 while Air China gained 1.8% to CNY15. See related report: China’s 2010 passenger forecast upgraded by 3% to 16%. Profits flowing

Also in North Asia, shares in Skymark Airlines retreated 1.6% to JPY684 despite the Japanese LCC more than doubling its net income forecast for the 12 months ended Mar-2010 to JPY5,500 million (USD67.8 million), on the back of strong sales.

Also declining were shares in Air New Zealand (-3.2%). Court papers have revealed that the carrier is a focus of a US Justice Department investigation into alleged price fixing by air cargo companies. 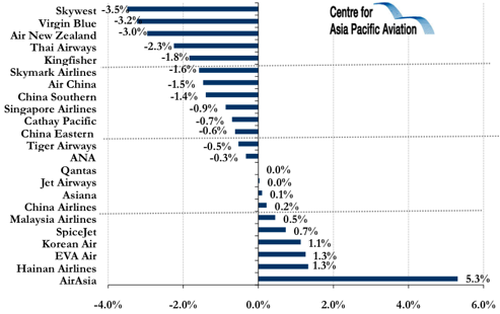