AirAsia’s operation in the Philippines is entering a new phase which the group hopes will lead to profitability in 2016 and eventually an initial public offering. Growth is also expected to resume in 2016, ending a phase of consolidation and fleet reductions.

The AirAsia Zest brand will be retired by the end of 2015 in favour of the Philippines AirAsia brand. AirAsia has already completed the transition to a single operating certificate in the Philippines, following a complicated and costly two years of maintaining two separate affiliates.

AirAsia’s Philippine operation has been highly unprofitable since it was launched in 2012. Turnaround efforts are banking on cost reductions driven by the transition to a single airline and higher yields that will be generated by a more international focused network. The network will be expanded to include several new routes from secondary hubs, in line with a new AirAsia Group strategy to open new unique point to point routes from secondary hubs throughout Southeast Asia.

This is the third in a Sep-2015 series of reports on the AirAsia Group, following CAPA's LCC Airports Congress in Bangkok.

AirAsia has struggled in the Philippine market since 2012

Philippines AirAsia (PAA) launched in Mar-2012 with a fleet of two A320s based at Manila alternative airport Clark. The initial operation struggled, leading PAA to pursue in early 2013 a quasi-merger with Zest Airways, a much larger LCC which was based at Manila International Airport. Zest adopted the AirAsia Zest brand in late 2013.

PAA and AirAsia Zest had to initially maintain separate operations and refrain from pursuing a complete merger due to regulatory obstacles although the two carriers were able to cooperate closely. PAA moved its fleet of two A320s in Oct-2013 from Clark to Manila, where it was able to use Zest slots that opened up after Zest phased out its turboprop fleet.

Over the last two years AirAsia’s operation in the Philippines has been in an almost constant state of restructuring. Currently the operation consists of only 12 active aircraft, which are used to serve seven domestic and seven international destinations.

As CAPA has previously highlighted, AirAsia’s operation in the Philippines has been consistently unprofitable, posting unsustainably high negative margins. Operating losses narrowed by 62% in 1H2015 to PHP1.083 billion (USD24 million) but this is still a dismal performance as the revenue base was only PHP4.425 billion (USD99 million) and the traffic base was only 1.82 million passengers.

But the outlook for AirAsia’s Philippine operation is starting to brighten.

The load factor of AirAsia’s Philippine operation improved to 78% in 1H2015 compared to only 67% in 1H2014. Passenger traffic was flat despite a 10% reduction in seat capacity as unprofitable routes were cut. 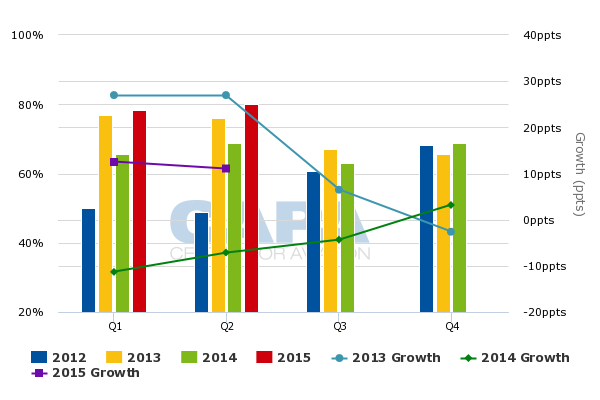 Note: includes Philippines AirAsia since it launched in 2012 and Zest figures since following the 2013 merger
Source: CAPA - Centre for Aviation and company reports

Since the beginning of the current quarter PAA and AirAsia Zest have transitioned to a single air operators’ certificate (AOC), which the carriers were unable to pursue initially due to the long process of securing required approvals. Streamlining the operation under the AOC of PAA should facilitate efforts to reduce cost.

AirAsia currently still has two brands in the Philippines with Philippines AirAsia and Zest AirAsia. PAA CEO Josephine (Joy) Caneba told CAPA on the sidelines of the 22-Sep-2015 CAPA LCC Airports Congress in Bangkok that final approval to merge the brands was recently secured and the Zest AirAsia brand will soon be phased out.

A brand campaign is expected to be rolled out over the next couple of months throughout the Philippines aimed at cementing the PAA brand.

The fleet is also now in the final process of being streamlined.

Ms Caneba said PAA still has 15 aircraft on its books but is in the process of selling older aircraft and aircraft powered with V2500s that were inherited from Zest. PAA will be left with 12 newer model CFM56-powered A320s, giving it one type of aircraft that is consistent with the rest of the AirAsia Group and generating operational efficiencies.

Philippines AirAsia CEO Joy Caneba discusses the transition to a single AOC and brand, the streamlining of the fleet and opportunities for international growth including to China

Philippines AirAsia is ready to resume expansion in 2016

Ms Caneba told CAPA that PAA aims to resume fleet growth in 2016 and has a fleet plan that envisions three additional A320s per annum.

The new phase of fleet and network growth is made possible as a long restructuring phase is now nearing completion. Unviable routes have been cut and unit costs have been reduced by streamlining the fleet, transitioning to a single AOC and pursuing other cost saving initiatives.

Expansion is also now possible as USD50 million in new capital has been raised from the five existing shareholders, which include four Filipino investors (with 15% stakes each) and Malaysia-listed AirAsia Berhad (with a 40% stake). Ms Caneba expects the recapitalisation exercise will be completed by the end of 2015.

Strategically, PAA needs to resume expansion as it cannot afford to be stuck at its current modest capacity level. Cutting capacity and the fleet over the last year was necessary but is seen as a temporary measure to position the airline for future growth.

PAA has already developed Kalibo as an alternative international hub

PAA has been working on a network expansion plan which focuses on opening new unserved routes from secondary gateways such as Davao, Iloilo, Kalibo and Puerto Princesa.

Kalibo is now one of three PAA bases along with Cebu and Manila, which are the largest two cities in the Philippines. Kalibo is currently linked with Manila and five international destinations including three in China (Beijing, Hangzhou and Shanghai Pudong) and two in South Korea (Busan and Seoul Incheon). PAA also operates seasonal services from Kalibo to a fourth destination in mainland China, Wuxi.

Cebu is a smaller base with just one international and two domestic routes. From Manila, PAA currently has six domestic and five international routes, according to OAG data. 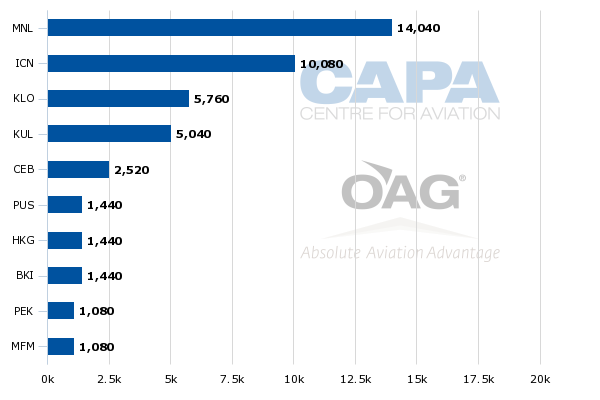 Note: Kalibo-Shanghai, which is served with three weekly flights, is not included in these figures as the route operates as a charter
Source: CAPA – Centre for Aviation and OAG

Kalibo is a gateway to the popular resort island of Boracay in the central Philippines. PAA is now looking at launching flights to Caticlan Airport, which is much closer to Boracay, after a runway extension is completed in early 2016.

But Kalibo Airport will remain a gateway to China as PAA expects to only be able to operate domestic and potentially some shorter international flights from the upgraded Caticlan Airport.

Davao, Iloilo and Puerto Princesa would be new gateways for PAA with international routes initially operated using A320s from the existing bases. But PAA plans to establish new aircraft bases within the next couple of years at Puerto Princesa and potentially other secondary airports.

Iloilo, which is located south of Kalibo in the central Philippines, is also planning terminal expansion with upgraded international facilities. PAA now only serves Iloilo with domestic flights from Manila. The only scheduled international services at Iloilo currently consist of three weekly flight to Hong Kong and two weekly flight to Singapore operated by Cebu Pacific.

Davao is the largest city in the southern Philippines but only has one international service – a link from Singapore operated by SilkAir.

Domestic and Manila growth to slow

PAA will continue to pursue some expansion at its main base in Manila, including a new flight to Singapore which is included in the 2016 network plan. But the main focus will be on secondary hubs in part because Manila is capacity constrained and PAA is now fully utilising its Manila slots.

PAA is also not planning significant growth at Cebu, where it recently cut capacity. PAA currently has nine daily flights at Cebu, including seven to Manila, one to Davao and one to Seoul. Cebu-Davao, which connects the second and third largest cities in the Philippines, is PAA’s only remaining point to point domestic route.

PAA is now focusing more on the international market as domestic routes are generally lower yielding and in some cases oversupplied. The Philippine Airlines (PAL) Group has resumed domestic capacity expansion in 2015 and relaunched several secondary domestic routes. PAA has sensibly determined is it better off redeploying some if its domestic capacity to the higher yielding international market.

Over the last couple of years AirAsia has discovered that battling against PAL and much larger LCC Cebu Pacific in the domestic market is generally a losing proposition.

PAA is particularly now focusing on the Philippines-China market. It sees opportunities to add several destinations in China from multiple Philippine gateways. Ms Caneba told CAPA that PAA will probably launch Guangzhou in 2016, as well as other cities in mainland China.

The Philippines is emerging as a popular tourist destination for Chinese residents despite some political tensions between the two countries. China is also a relatively big outbound market as there is a large Filipino Chinese population.

PAA has ample room to grow in the Chinese market as it currently has only 900 weekly one-way seats to China, according to CAPA and OAG data. China accounts for only about 8% of PAA's total international seat capacity. 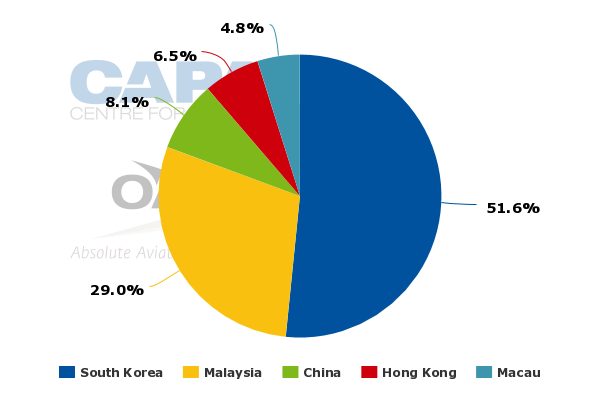 Note: Kalibo-Shanghai, which is served with three weekly flights, is not included in these figures as the route operates as a charter
Source: CAPA – Centre for Aviation and OAG

PAA is particularly keen on linking Chinese cities with secondary gateways in the Philippines including additional routes from Kalibo and new routes from Puerto Princesa. The routes under consideration are currently not served by any carrier, which makes them particularly appealing to PAA.

PAA is keen to expand under the radar screen of its much larger local competitors, PAL and Cebu Pacific, while exploiting network synergies with the AirAsia Group. AirAsia already serves most of PAA’s potential Chinese destinations, reducing the risk for PAA as it can leverage its parent’s experience operating and selling in China.

PAA sees a potentially lucrative niche by pursuing interconnectivity with other AirAsia carriers and stimulating demand on new international routes from the Philippines which have never been served previously.

As CAPA highlighted in the first two Parts in this series of analysis reports on the AirAsia Group, developing new international routes from secondary gateways is also part of a new broader strategy at AirAsia.

Part 1 examined the upcoming opening of a new base by Thai AirAsia at U-Tapao Airport near Pattaya as well as plans to open two more new secondary bases in 2016. Part 2 examined similar plans for expansion at secondary airports by Malaysia AirAsia, including a planned new hub at Langkawi.

2016 will be a critical year for Philippines AirAsia

The focus on secondary international routes is logical as PAA needs to differentiate itself from its larger competitors. There should be room for three local players in the Philippine market but PAA will never have the scale to outmuscle the PAL and Cebu Pacific on trunk routes.

Carving out a unique niche may be the only option for PAA if it is to become a viable carrier.

PAA has had a rough initial three and a half years and still faces major challenges. 2016 will clearly be a critical year for PAA.

If it meets its 2016 goal of becoming profitable aspirations for an initial public offering within two years will become realistic, providing a foundation for consistent growth. If the newly restructured PAA remains loss-making its long-term survivability – and the AirAsia Group’s need for a Philippine affiliate – will again be questioned.