Malaysia-based long-haul low-cost airline group AirAsia X is moving forward with plans to establish its second affiliate in Indonesia with a base from the resort island of Bali. The group recently signed an agreement with a local partner to establish Indonesia AirAsia X (IAAX) and has already secured an air service licence from Indonesian authorities.

IAAX will likely launch services by the end 2014, sourcing 377-seat A330-300s from the group’s recently expanded order book. The new carrier plans to serve destinations in Australia and North Asia, connecting dots which are already served by AirAsia X from Kuala Lumpur and soon by Thai AirAsia X from Bangkok.

Indonesia’s LCC sector is fiercely competitive, with a fleet of nearly 200 aircraft which is slated to expand by another 20% in 2014. But IAAX will be Indonesia’s first long-haul low-cost carrier, giving it important first mover advantage in several relatively underserved markets.

AirAsia X Berhad has announced that also on 23-Jan-2014 IAAX received approval from Indonesia’s Directorate General of Civil Aviation (DGAC) for an air service licence (ASL). The group stated that the application for ASL was initially submitted in Jun-2013, one month after IAAX was incorporated.

The group says it will now proceed with the project by submitting an application for an air operators’ certificate (AOC). It has not provided a timeframe for a potential launch but the new carrier should begin operations by the end of 2014. Flights could be launched by IAAX as early as mid-2014, following the timescale being used in Thailand.

At Thai AirAsia X (TAAX), an air operators’ licence (AOL) – the Thai DCA equivalent of an ASL – was received on 10-Oct-2013 and the carrier is already in the final stages of the AOC process. TAAX took delivery of its first A330-300 on 15-Jan-2014 and is now operating the aircraft on certification flights. The carrier has been aiming to launch services by the end of 1Q2014.

TAAX and IAAX will follow similar models, focusing on operating to destinations already served by Kuala Lumpur-based AirAsia X (AAX). As it adds affiliates, the AirAsia X Group seeks to reduce risk and keep start-up costs to a minimum by leveraging its existing network. 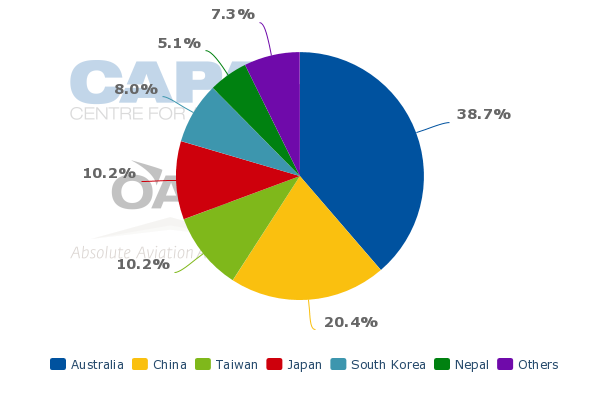 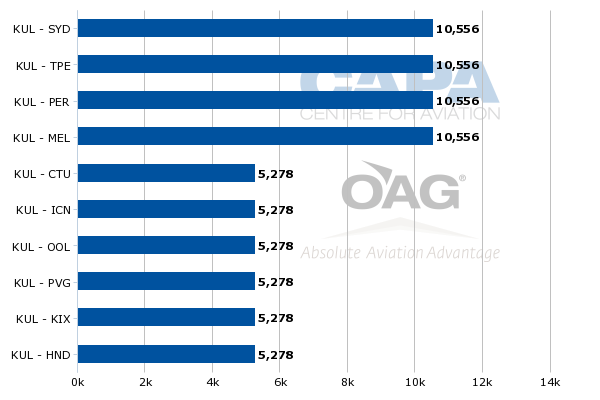 Melbourne and Sydney are the most logical Australian routes for IAAX as Bali-Perth is already served by short-haul affiliate Indonesia AirAsia (IAA) and is within the typical four hour mark that divides the AirAsia and AirAsia X sub-groups. IAA serves Bali-Perth with five daily flights, making it the carrier’s second largest route after Singapore-Jakarta. IAA also serves Bali-Darwin with four weekly flights.

Adelaide, AirAsia X’s newest Australian market, also has potential but is much smaller than Melbourne or Sydney. Gold Coast is more an inbound Australia market but could potentially be considered as it is near Brisbane, the only Australia-Bali market not currently served by an LCC. (Adelaide is about five hours from Bali while Gold Coast is about six hours, putting it firmly under IAAX although they are technically within A320 range.)

There are currently over 30,000 weekly one-way seats between Bali and Australia, according to CAPA and OAG data. Jetstar accounts for a leading 30% share, Virgin Australia about 26%, Garuda 22% and AirAsia 22%. With a widebody base opening up all of Australia, AirAsia will almost certainly become the leading brand in this important market within year or two after IAAX’s launch. 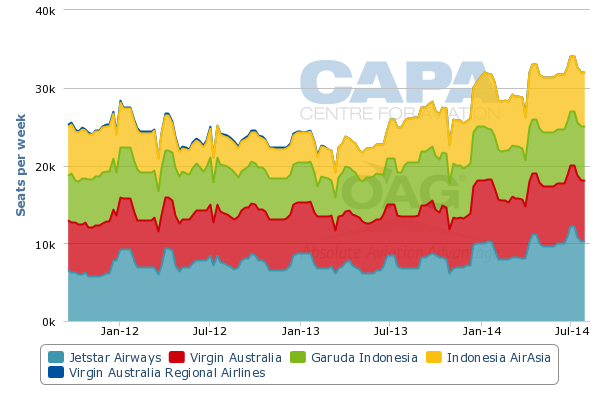 All four carriers currently serving the Bali-Australia market have increased capacity over the last year. On a year-over-year basis total seat capacity between Bali and Australia was up 33% in late Jan-2014. IAAX’s entrance will lead to yet another surge.

While the Bali-Australia market is already relatively crowded there is room for a new LCC entrant. With an Indonesian base, IAAX will have lower costs than its Australia-based competitors, enabling it to reduce fares and stimulate demand.

AirAsia’s success in the Bali-Perth market, where IAA has a leading 47% share (compared to only 24% for Jetstar, 17% for Garuda and 12% for Virgin Australia) should give the group confidence it can succeed in penetrating other Bali-Australia routes. The impact on Australian carriers could be significant, although Jetstar’s recent introduction of 787s should help Jetstar better compete against IAAX.

Virgin Australia, which only operates 737s to Bali despite payload restrictions on some routes, could be the most vulnerable. Virgin could hand over some of its Bali routes to its LCC subsidiary Tigerair Australia but that would not be an option for the core Melbourne and Sydney markets.

The addition of Bali-Australia flights also helps AirAsia X and AirAsia overall connect the dots and provide a larger network for its Australian passengers. At Bali connections will be available on IAA to five domestic destinations in Indonesia – Bandung, Jakarta, Makassar, Surabaya and Yogyakarta. These connections should provide some Indonesia origin passengers, resulting in a slightly more balanced mix.

New IAA routes at Bali are likely as the potential viability of new domestic and short-haul international routes improves due to the prospects of providing feed to IAAX. IAA will also likely start offering a transit product for its own flights at Bali. Currently passengers transiting between AirAsia flights in Indonesia can only self-connect. At Bangkok, short-haul Thai AirAsia only just introduced a connection product in late 2013 in anticipation of TAAX.

Bali is the second largest of IAA’s five bases. Only Jakarta is larger but with Jakarta congested and IAAX selecting Bali, IAA’s Bali base is likely to surpass Jakarta within the next year or two. IAA currently has almost 87,000 weekly seats at Jakarta compared to about 74,500 at Bali. 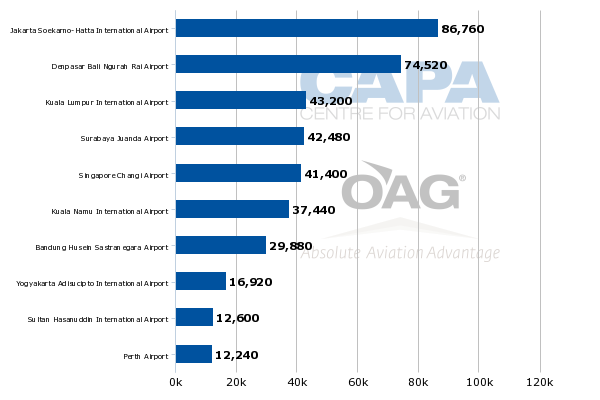 Malaysia AirAsia (MAA) and Thai AirAsia (TAA) also serve Bali, operating three and one daily frequencies from Kuala Lumpur and Bangkok respectively. As a group, AirAsia now has a leading 20% share of international capacity at Bali. In terms of total capacity (including domestic), the Garuda group is the market leader in Bali with about a 32% share followed by the Lion Air Group with about 19% and the AirAsia Group with about 18%. 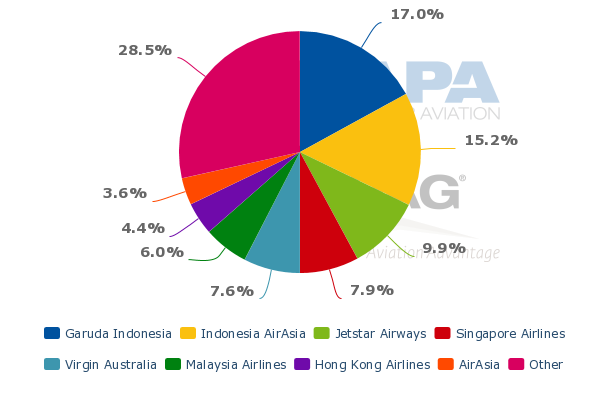 There are currently about 28,000 weekly one-way seats between Bali and North Asia, making it a slightly smaller market than Bali-Australia. But there is huge potential for growth, particularly from mainland China which has emerged as the fastest growing source market for Indonesia’s budding tourism sector.

Currently there is only one LCC operating between Bali and North Asia, a daily service by Tigerair Mandala to Hong Kong which was only launched in Dec-2013. IAAX will have first LCC mover advantage across several Bali-North Asia routes and should be able to stimulate new demand as well as take market share away from some of the incumbents.

Garuda Indonesia is currently the market leader in the Bali-North Asia market with about a 31% share of capacity, according to CAPA and OAG data. Garuda links Bali with Seoul, Hong Kong and three airports in Japan – Tokyo Haneda, Tokyo Narita and Osaka Kansai.

Bali is also currently served from Hong Kong by Hong Kong Airlines and Cathay Pacific; from Seoul by Asiana and Korean Air; from Taipei by China Airlines and EVA Air; from Beijing by Air China and Hainan Airlines; from Shanghai by China Eastern; and from Guangzhou by China Southern. 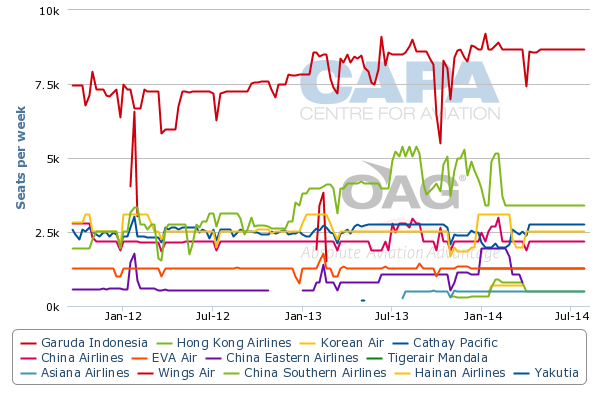 Bali-China can be a challenging market to crack as it is dominated by package tour agents, including regular charters from secondary Chinese cities. But AirAsia has experience in the Chinese market which IAAX can leverage as it becomes the first Indonesian carrier to operate year-round scheduled services between Bali and mainland China.

IAA currently does not serve North Asia but was planning to enter the North Asia market in 2014 with Hong Kong and Macau among the potential destinations. IAA previously cited Surabaya and Medan as the bases it would use to mount North Asia flights, an indication that it could split the Indonesia-greater China market with IAAX by leaving the new carrier to potentially serve some of the same destinations from Bali.

Such a strategy would be logical as Bali is a bigger market and can more easily support widebody service. But flights to North Asia from Surabaya and Medan would be longer than the normal four hour maximum for AirAsia short-haul affiliates. Under its agreement with AirAsia, AirAsia X has the first right to operate any route over four hours.

AirAsia X’s announcement of Bali as its third base after Kuala Lumpur and Bangkok comes as no surprise. The group has repeatedly made it clear it has a multi-hub strategy for long-haul expansion and this forms a key part of its overall strategy for making AirAsia the leading LCC brand across Asia-Pacific and eventually beyond.

Proceeding with Indonesia right on the heels of Thailand is logical as it diversifies the group’s portfolio and reduces its reliance on the Bangkok market, which is currently impacted by the political uncertainly in Thailand. Bali could potentially see faster expansion than Bangkok should the political situation not improve. But in the long run Bangkok and Bali are both ideal markets for AirAsia X given that in both cases it can leverage an already strong AirAsia presence.

AirAsia X also now has the aircraft on order to support multiple bases. Its seven additional aircraft for 2014 are sufficient to support further expansion in Malaysia, where it currently operates 17 A330s, as well as launch Thailand and Indonesia. So far the group has committed only two A330s for TAAX and will likely make a similar initial commitment for IAAX, leaving three additional aircraft for its Kuala Lumpur base.

Indonesia is particularly attractive as it is the largest market in Southeast Asia and, unlike the other top five markets in Southeast Asia, does not yet have a long-haul low-cost carrier. Indonesia is seeing rapid LCC expansion in the short-haul sector. In 2014, 35 narrowbody aircraft are expected to be delivered to Indonesian LCCs, growing the fleet by 19% to 219 aircraft.

But the LCC leader in Indonesia, Lion, has no plans to enter the long-haul low-cost market. Lion Air intends to keep its 737-900ERs to routes of four hours or less and instead use new full-service subsidiary Batik Air for longer routes. The group recently stated it plans to look at acquiring new widebody aircraft – while cancelling its order for five 787s – but widebody aircraft will be used on domestic trunk routes rather than medium/long-haul international services.

As CAPA reported in Oct-2013, the decision by Lion not to follow rival AirAsia into the long-haul low-cost sector "leaves a potential opening for AirAsia X in Indonesia, which is by far the largest country in Southeast Asia and has a rapidly growing aviation market that remains relatively under-served by medium/long-haul carriers... Bali has a large inbound tourist market, allowing a potential Indonesia AirAsia X to leverage the AirAsia brand in markets such as Bali-Australia and Bali-North Asia. Bali also does not have the infrastructure constraints of Jakarta, where basing a new carrier would be nearly impossible due to the lack of available slots."

Lion inevitably will start to compete more against AirAsia in Indonesia’s international market as Lion continues to rapidly expand its fleet. The Lion Group currently only operates seven international routes from Indonesia but is a dominant domestic player with about a 50% share of Indonesia’s huge domestic market compared to about 5% for AirAsia.

AirAsia has a window of opportunity to cement and further grow its leading position in Indonesia’s international market, which is relatively small but has huge growth potential. The quick launch of IAAX just a few months after TAAX will further strengthen AirAsia’s position in two strategically important markets for the group.