Air New Zealand’s yields continued to suffer in Oct-2009, with Group yields down 11.5% in the month and yields, excluding exchange rate effects, falling 12.4%. This represents a worsening from Sep-2009 levels - Group yields were down 8.6% and ex-exchange effects yields down 10.4% in Sep-2009 - and partly reflects New Zealand’s Spring School Holiday Period falling between 26-Sep-2009 and 11-Oct-2009. 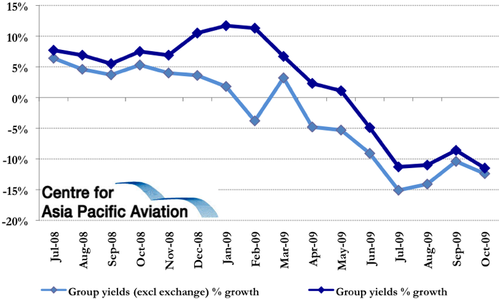 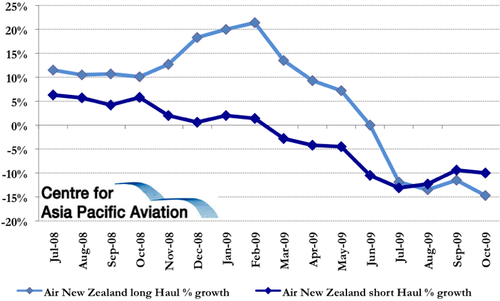 Load factors up for third consecutive month in Oct-2009

In more positive news, Air New Zealand’s load factors were up in the month, gaining 3.0 ppts, as the carrier reduced capacity (ASKs) by 10.3%, for three consecutive months of load factor improvements, and aided by a 5,0 ppt improvement in Tasman/Pacific load factors. Prior to this, the carrier experienced a double blow of sharp yield contractions and declining load factors. 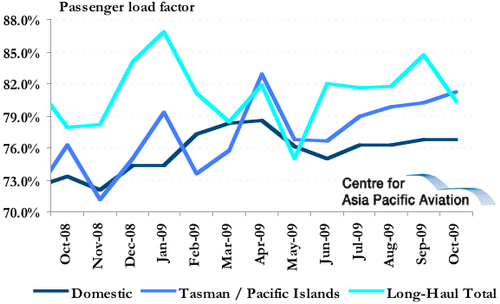 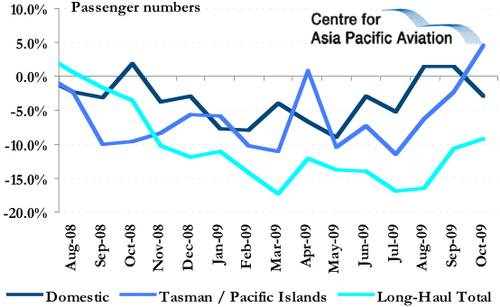 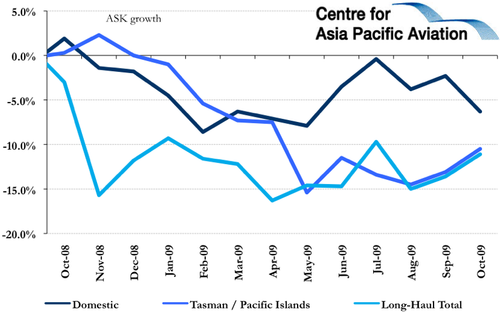 Mr Thompson added, “the market is continuing to grow but it’s a matter of price. The yields are very poor. But the Tasman is an important market for us, it’s our largest international market, and we’ll continue to work hard at it… at the moment the market is awash with capacity. There are nine carriers on the route. It is a very tough market”.

Conditions, however, remain “challenging” in the Asia region, according to Air New Zealand, with demand (RPKs) down 16.3%. The carrier reduced capacity (ASKs) by 17.2% on these services, resulted in an improved load factor (+0.9 ppts) to 78.3%.

Load factor improvements aside, intense yield pressures are expected to remain, as Air New Zealand continues to experience yield and demand pressures, due to the global economic crisis.

These pressures have been further exacerbated as Qantas/Jetstar continues its aggressive push on the Tasman and in domestic New Zealand markets and as Pacific Blue continues to fight to grow its presence domestically and internationally.

This situation has prompted Air New Zealand CEO, Rob Fyfe, to previously state that he believes the current New Zealand domestic market with three players in unstable, with the biggest challenge in the market being to adapt to this scenario.

In reaction to this competitive pressure, Air New Zealand, on 16-Oct-2009, reduced its domestic airfares by up to 23%, while also simplifying its fare structures. While this will stimulate demand and load factors and place increased pressure on Air New Zealand’s competitors, it means Air New Zealand could be heading for another month of high single-digit or low double-digit yield reductions in Nov-2009.