Air New Zealand, in its Feb-2011 traffic release, stated group-wide yields for the financial year to date (eight months to Feb-2011) have increased 1.9% year-on-year. Short-haul yields are down 2.3% partly due to the new 'seats to suit' product while long-haul yields have improved by 5.5%. Removing the effect of foreign exchange, group-wide yields were up 4.6%. 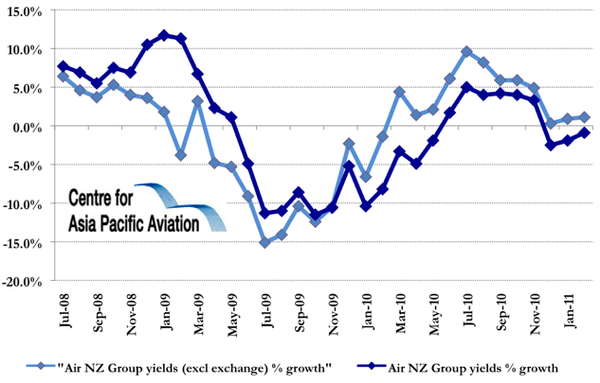 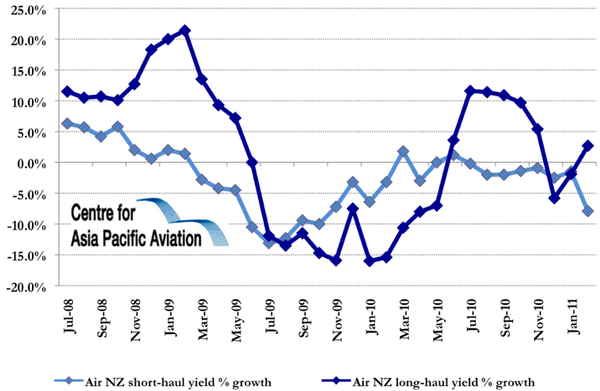 In the domestic market, passenger numbers have improved on a year-on-year basis for the past eight months, in line with traffic (RPKs) and capacity (ASKs) trends.

Some 66.3% of the carrier’s capacity is allocated to the domestic market, according to Innovata. The carrier has an extensive domestic network and is the sole operator on numerous regional sectors. 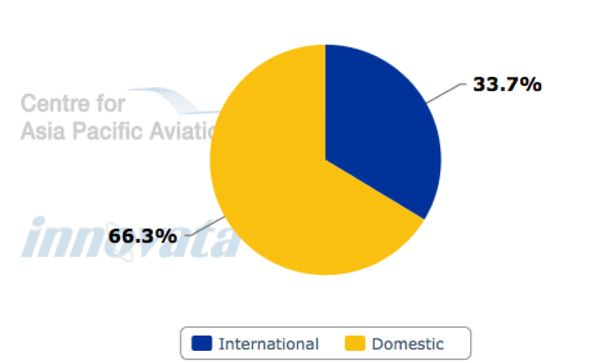 However, load factors on the carrier’s North America/UK routes have slipped from the previous years’ respective rates for the past five months. 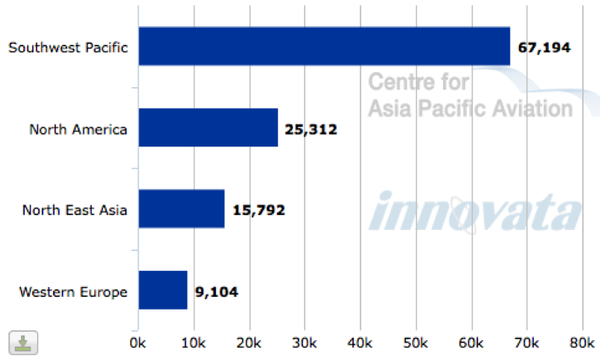 Also this month, Air New Zealand cautioned that it expects the financial konock-on of the Christchurch earthquake, which occurred on 22-Feb-2011, to be more severe than previously forecast. Air New Zealand stated its full year pre-tax profit could be NZD50 million-60 million (USD37-44 million) below forecasts. The carrier, which previously expected to be profitable in the second half, now expects to be unprofitable in the six month-period. Full-year normalised earnings are now expected to fall below NZD100 million (USD74 million).  "Our concerns are relatively near term, for the next three or four months, then we'll see some improvement in our position looking forward from there," CEO Rob Fyfe said.

However, Mr Fyfe has subsequently assured customers that the airline would be return to profitability “within months” without needing to suspend routes. Mr Fyfe said the airline has adjusted schedules in light of weak demand in recent weeks but added he would be “very surprised” if he was forced to cancel routes. Mr Fyfe expects to be back in the black for 1HY2012 “based on what we’re seeing today”.

Christchurch is one of New Zealand's three major points and consequently a vital part of the flag carrier's network. As post-earthquake tremors and the cleaning up exercise continue, many residents have left the city temporarily and business activity has slowed, making for a significant slowdown in activity - although relief worker traffic has helped swell the numbers. Air New Zealand has a 63% capacity share at the airport, with Jetstar Airways also heavily exposed to the Christchurch market 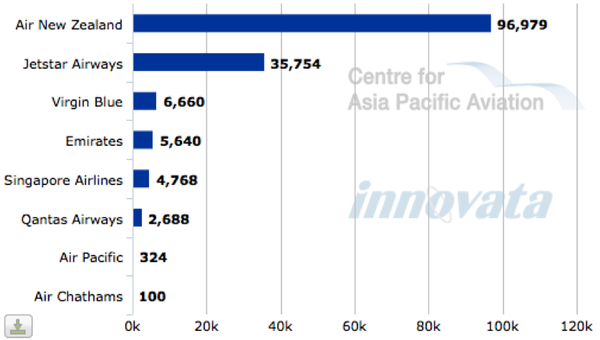 Air New Zealand CFO Robert McDonald has stated that Christchurch Airport is to serve as a gateway rather than a destination for tourists as the tourism infrastructure is assessed after the recent earthquake damage. Mr McDonald stated the carrier has changed the schedule of its trans-Tasman services in and out of Christchurch so more tourists could arrive and leave during the day time.

The carrier also had its outlook downgraded this week by Moody's Investor's Service, from "stable" to "negative", as a result of the earthquakes in Christchurch and Japan, in addition to escalating jet fuel prices.

The ratings agency affirmed the airline's 'Baa3' senior unsecured issuer rating, which Moody's stated is supported by Air New Zealand's dominant position in its core domestic market, strong liquidity and currently solid financial metrics relative to its global peers. The rating also benefited from the implicit support and ownership by the government, Moody's said. The rating outlook could revert to stable if the current high level of uncertainty in the company's operating environment, including demand conditions in New Zealand and on other affected routes, stabilised, along with a moderation in outlook for jet fuel prices. However, it said more negative rating pressure could evolve if there was evidence of sustained weakness in the carrier's financial profile.

Fuel costs a concern; raising fares and well-hedged for 2H2011

Another factor negatively impacting Air New Zealand and airlines on a worldwide basis is fuel costs. Air New Zealand is increasing domestic and international fares as a result of the rising cost of jet fuel.Over the past month jet fuel has increased from USD114 per barrel to USD130 per barrel, adding almost USD10 million per month to the airline's operating costs.