The fruits of several years of investment in new aircraft and product are finally bearing fruit for Air New Zealand, with the carrier reporting a NZD139 million (USD115.6 million) underlying first half profit for FY2013, up 300% on a year earlier. Statutory profit after tax of NZD100 million (USD83.1) was also up NZD62 million (USD51.5 million).

The key driver of the result, the highest in five years, is a NZD72 million (USD59.9 million) improvement in passenger revenue on a 3.2% increase in demand and a 2.7% increase in capacity.

The restructured long-haul network provided the biggest improvements, having returned to profitability for the first time since the global financial crisis and seeing significant growth in demand and yield.

Air NZ’s new CEO, Christopher Luxon, who took over from Rob Fyfe on 01-Jan-2013 has declared the airline is now in a “growth phase” and will take delivery of two additional 777-300ER from Jul-2014, replacing the last two 747-400s. The carrier is now focused on sustainable growth in the Pacific Rim region and a number of initiatives will be rolled out over the next few months.

Normalised profits before tax for the second half of FY2013, based on the carrier’s current forecast of demand and fuel prices “will comfortably exceed the corresponding period last year.”

Chairman John Palmer attributed the result to “the substantial change programme the airline has been implementing has positioned the business for consistent growth and sustainable profitability over the coming years”.

During the half, Air NZ withdrew its twice weekly Auckland-Beijing services and consolidated its Chinese operations to Shanghai which has since become a daily service from Auckland.

Mr Luxon’s background in retail and marketing during his previous career at Unilever consumer goods group is also coming through with the carrier focusing on improved sales systems in key markets.

“A key driver in achieving this turnaround has been getting our network right and improving our sales execution,” Mr Luxon said. 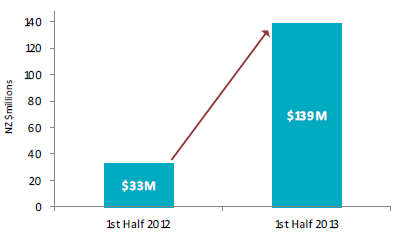 Mr Luxon said the result was a step towards Air NZ achieving a “virtuous circle of profitable growth” where growing revenues and cost controls lead to better profitability, shareholder returns enabling further reinvestment in the business. 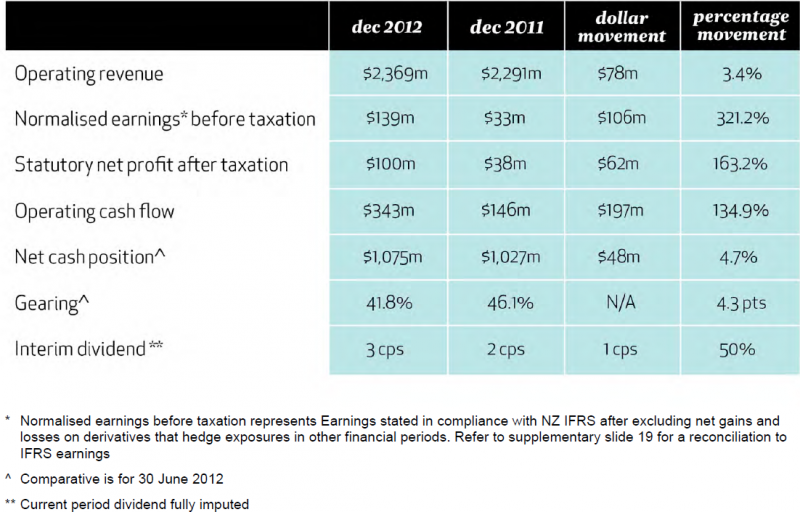 Source: Air New Zealand
*Normalised earnings before taxation after excluding net gains and losses on derivatives that hedge exposures on other financial periods

The restructured long-haul network is back in the black

Long-haul services returned to profit for the first time in five years, reflecting the redeployment of Asian capacity to markets with stronger demand, particularly North America.

The economic effect of the 777-300ER fleet replacing the 747-400s, offering 20% operating cost savings, was beginning to flow through. Mr Luxon insisted the two additional 777s were not an insurance policy against further potential delay in the delivery of the 787-9s owing to the grounding of the existing 787-8 fleet over concerns relating to battery malfunctions.

He remained confident that the first 787-9, for which Air NZ is the launch customer, would arrive mid-2014 as scheduled.

The carrier is still evaluating deployment options for the aircraft which could include adding capacity to existing routes or opening new destinations in the Americas, Asia or Australasia.

Denver and Houston have both been previously highlighted by the airline as possible candidates that could be served with existing equipment.

The North American market is performing well with a 17% increase in Americans travelling to New Zealand in Jan-2013 and a 6% increase in New Zealanders outbound, albeit compared to a weak high season in 2012.

In addition to consolidating the China services to Shanghai, Air NZ also switched partners in Japan from JAL to ANA, gaining greater access to the Japanese domestic market.

Air NZ will pull off the loss-making Hong Kong-London route on 04-Mar-2013 and has instead entered into a codeshare agreement with Cathay Pacific between Auckland and Hong Kong.

The Cathay tie-up is an extension of Air NZ’s strategy to increase its network reach through alliances, avoiding the need to commit substantial capital to additional aircraft. Under the deal, effective from Dec-2012, Air NZ and Cathay will codeshare on each other's Hong Kong-Auckland services.

Cathay will also lease Air NZ’s daily Heathrow slot which it will begin to operate in Jun-2013.

The Cathay partnership is a rare and valuable coup for Air NZ. Cathay has been notoriously reticent in partnering with other carriers – although Qantas' recent deal with Emirates is causing some rethinking of that reluctance. Air NZ hopes the relationship will gain it further access to the Chinese market, where the carrier has so far struggled to make headway, while also contending with increasing competition from China Southern. China's largest airline, China Southern is rapidly building its links to New Zealand and Australia from its Guangzhou hub on mainland China, just inland from Hong Kong.

Despite the importance of the Australian market (about two thirds of New Zealand's international seats are across the Tasman), Air NZ’s alliance with Virgin Australia received little more than passing mention: "proving very successful, giving us a combined market leading position on the Trans-Tasman routes....Our ownership interest of 19.99%...reinforces this relationship." But Air NZ has yet to generate the bridgehead it has long sought into the domestic Australian market.

Air NZ will also lose its monopoly on the Auckland-Honolulu route in Mar-2013 when Hawaiian Airlines launches a three times weekly service using a two-class 294-seat A330-200 aircraft. The move more than doubles capacity on the Honolulu-Auckland route from 690 one-way seats a week to nearly 1,600 seats.

Air NZ has responded to the threat by adding a weekly frequency to match Hawaiian.

Hawaiian believes there is significant growth potential on the route, pointing to the 30% reduction in passenger numbers on the route after the introduction of the 747-400 allowed Air NZ to operate direct Auckland-Los Angeles services, dropping Honolulu as a refuelling stop over.

Domestic yields are under pressure as Jetstar applies pressure

Domestic yields declined 4.3% to NZD27.8c (USD23.1c) as fares fell and the economy struggles to gain pace.

Demand grew slightly ahead of capacity, leading to a marginal improvement in load factors.

Jetstar is making small domestic market share gains, but Air NZ is likely to be able to keep its advances at bay as additional A320s join the fleet over the next two years.

The LCC has about a 17% share of the total domestic market, but on most routes where it competes with Air NZ, Jetstar currently has about a 30% share, up from about 25% a year ago, according to Innovata. Air NZ's strength remains in its dominance of regional routes where its fleet of ATRs and Beech1900s allow it penetrate routes where Jetstar cannot go with its all-A320 fleet.

The average fleet age of nine years will increase slightly over the next year, before improving as another seven A320 arrive over the next two years to replace domestic 737-300s as well as the balance of an order of seven ATR72-600 which will provide incremental growth on the domestic routes.

Air New Zealand is well placed to capitalise on its long term strategy, but some longstanding challenges remain

Air NZ has begun to deliver on the significant investment and is now back in “growth mode” as it looks to expand its Pacific Rim business. The carrier has had the balance sheet strength – and the courage – to invest in aircraft and product at the most effective stages in the economic cycle.

The carrier will now implement its “Go Beyond Plan” plan which calls for building on its strong platform over the next five years, although precisely what form that will take remains to be seen.

As the new domestic fleet comes in, along with the long awaited 787-9, allowing Air NZ to expand its business, unit costs should reduce further allowing the carrier to realise the returns on an investment and strategy that has been several years in the making.

An intelligent underdog strategy, development of a strong brand and a commitment to cost containment has worked well for Air New Zealand on its long-haul routes. Since the carrier's effective renationalisation 12 years ago, it has gradually evolved a long-haul strategy which is a combination of selective partnerships, withdrawal from under-performing routes and under-the-radar operations in its own right. The test of longer term resilience will come as international expansion occurs.

And, although the partnership with Virgin Australia attracted only passing mention in the report, Air New Zealand will continue to seek a more expansive position behind its Australian gateways if it is to hold a growing Jetstar at bay in the long run.