As part of the agreement, Air New Zealand has also secured purchase rights for a further 11 aircraft. The first A320 is scheduled for delivery in Jan-2011, with the remainder to be delivered progressively by 2016, coinciding with the expiry of B737 leases.

According to Air New Zealand Group General Manager, Bruce Parton, “this is a very good time to buy aircraft. The industry is at the bottom of a deep cycle so demand for aircraft is limited, creating favourable conditions for buyers with strong balance sheets like Air New Zealand. As we did with the 777, 787 and earlier A320 purchases, we have been able to buy counter-cyclically and again secure an excellent deal for Air New Zealand...It will ensure the airline continues to have one of the youngest fleets in the world, and a world-beating product across the entire jet fleet”.

In South Pacific, the Australian Competition and Consumer Commission (ACCC) issued a draft determination proposing to grant authorisation for a JV between Virgin Blue and Delta Air Lines on their flights between Australia and the United States (trans-Pacific routes). Under the joint venture, the airlines would take a coordinated approach to a range of issues including pricing, revenue management, schedules, capacity and routes flown

According to the ACCC, “the joint venture is likely to assist Virgin Blue and Delta to compete more effectively against the incumbents on the routes, Qantas and United Airlines. The entry of Virgin Blue and Delta on the trans-Pacific routes has created strong competition on price and service in the market for passenger transport. The ACCC expects that this would continue to be the case under the new arrangements to the benefit of consumers”.

Also in the Asia Pacific, Deutsche Bank, in a new report on the impact of the Australian Federal Government’s Emissions Trading Scheme, stated the full implementation of the Carbon Pollution Reduction Scheme will cost Qantas AUD98.6 million in FY2013 and reduce after-tax net profit by 16.4%, while Virgin Blue will pay AUD29.4 million, resulting in a 19.1% reduction in profit levels.

Virgin Blue’s shares were down 2.0% yesterday, with Qantas’ shares slipping 3.9%.

Thai Airways expects yield improvements; plans to return to one of the top three airlines in Asia

Thai Airways’ shares were down 3.5% yesterday. Separately, Thai Airways’ President, Piyasvasti Amranand, stated he is determined to restore the carrier to one of the top three carriers in Asia, and is confident yields will start to improve with the improvement of its product.

Mr Piyasvasti stated three key issues that need to be addressed include meeting customer needs, being more competitive in terms of costs and financial structure and reacting more quickly to changes in the operating environment.

According to Mr Amranand, “we were one of the best at one time. And we will have to be one of the top three in Asia and top five in the world once again…Average yield should go up as product quality goes up, and we can afford to be more choosy about our customers and reduce the proportion of low-fare customers…I think we need to wait a little longer to be really sure that the yield is moving up. Right now we're probably breaking even, but if we can increase the yield then we can turn to profit, provided the oil price does not rise too much”.

It was reported that Air China will hold 51% of a cargo venture with Cathay Pacific, which will hold the remaining 49% stake, with the venture expected to be finalised in 1H2010.

The two carriers will reportedly provide ten B747-400Fs to be used by the Shanghai-based venture. The total investment and overall size of the JV’s fleet is yet to be agreed, but it expected to be finalised before the Shanghai World Expo in May-2010. 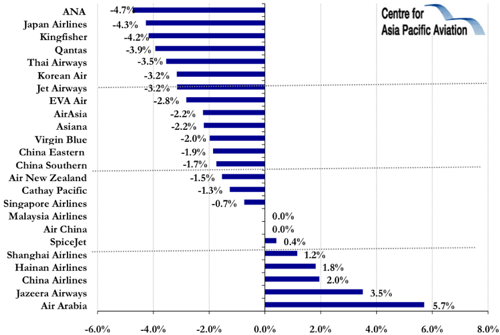