Air France has announced plans to move away from its Paris-centric strategy and moved into regional French market in a bid to counter the growing threat of low-cost carriers in its home market, which remains one of Europe’s few remaining spaces for growth in the sector.

To address ongoing structural changes in short-haul European market, Air France will make a concerted effort to grow regional services with a bold new strategy aimed at lowering its cost base, particularly on short-haul sectors, offer a wider network and counter the growing threat of low-cost carriers and the TGV in France. The strategy is likely to put an end to speculation about the company’s launching of an LCC offshoot, a plan it had remained coy about for several years.

Air France has become a Paris-centric carrier over the past decade as the management’s attention has been consumed by merger and integration efforts with KLM and developing the group’s “dual hub” strategy. Air France-KLM’s dual hubs, at Paris CDG and Amsterdam Schiphol, are one of the cornerstones of the group’s strategy, allowing the group to draw and disperse traffic from distant points across short-haul destinations. Although this strategy has been rolled out with success, it has partly resulted in the marginalisation of major French regional ports, including Nice, Marseille, Toulouse and Bordeaux, and put question marks over how regional France fits into Air France-KLM’s long-term strategy.

Air France’s top 10 international routes, as to be expected, are dominated by services from its Paris CDG hub. 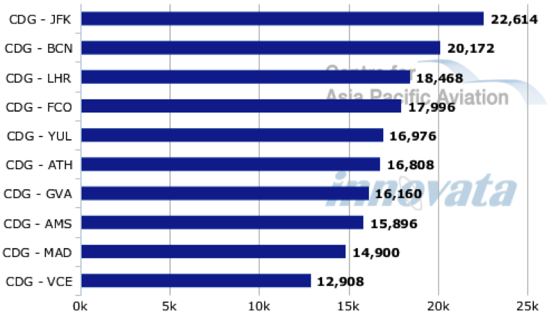 Similarly, Air France’s top ten domestic routes are dominated by connections between regional French ports and Paris Orly, its domestic base. This is in line with its strategy to feed regional passengers through CDG and onto international services. 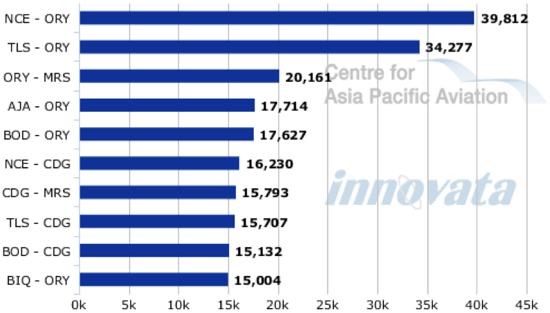 Air France maintains dominance, although it is being challenged by LCCs, across France’s main regional airports. 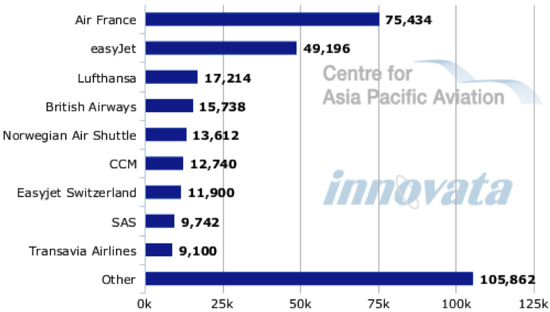 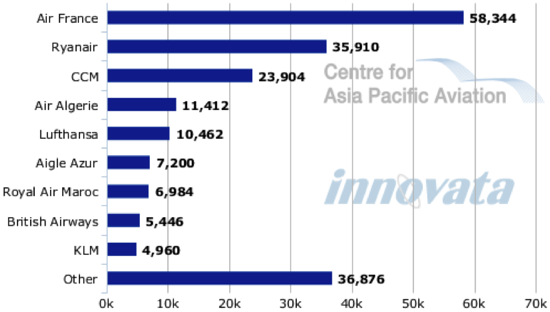 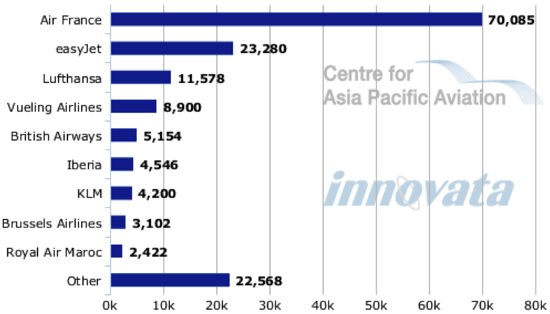 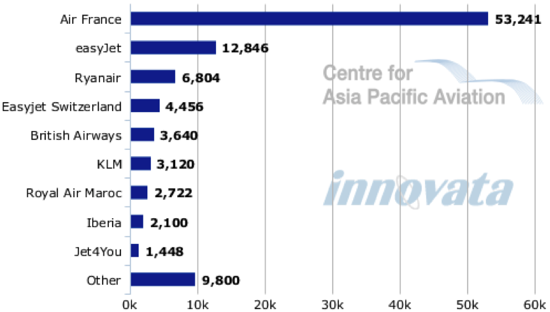 For European LCCs, which are now operating in slower-growth, and even contracting markets, finding new routes has proved a real challenge. Relative to its European counterparts, the French market remains underserved, from an LCC perspective, and as a result must appear wildly overpriced. Significant opportunities remain for LCCs in France, which is one of Europe’s most populous countries and among the world’s most popular tourist destinations.

LCCs accounted for just 25% of seats for domestic and intra-European flights in summer 2010, according to OAG. Only Switzerland and Greece have lower LCC penetrations. Among the larger European states, LCCs account for 65% of seats in Spain, 60% in the UK, 46% in Italy and 41% in Germany. The European average is 44%. LCCs have enjoyed rapid growth of LCCs across Europe, with France really the last remaining vestige. The low LCC penetration is due to the French government’s protection of the national carrier. 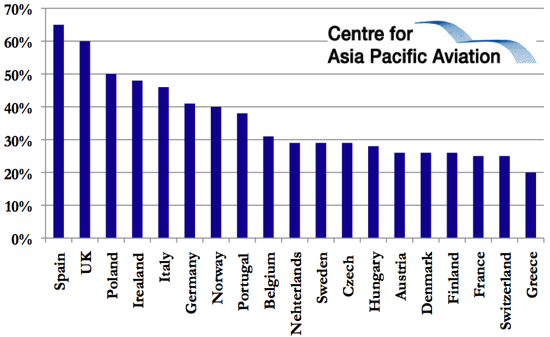 With so much potential and few competitors, with the exception of Air France, LCCs including easyJet, Ryanair and Vueling have made repeated attempts to move into the French market. Air France has made extensive use of its government ties and domination of the local market to create high entry barriers to the market, making it difficult for LCCs to prosper. Despite the tough conditions, LCCs are slowly making inroads into fortress France. In the domestic market, which has contracted 20% over the past nine years, LCCs have increased capacity, now accounting for nearly 11% of total capacity, up from under 2% in 2002.

France domestic market share attributable to LCCs for the month of July, 2002-11 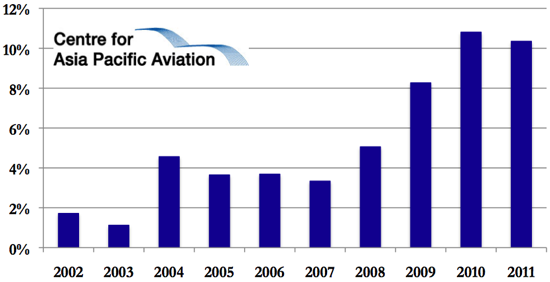 The market's 20% fall is the result of a combination of factors, including previous overcapacity, rationalisation of regional routes, the economic downturn in 2008 and 2009, and most significantly, the growth of France’s high-speed rail network, the TGV.

Things are starting to look up for LCCs however, with the model being embraced by many regional airports, most significantly Lyon, Marseille and Bordeaux, which have created dedicated low-cost terminals. The terminals offer striped down service, providing maximum simplicity and efficiency for LCC clients. Bordeaux’s LCC terminal “Billi”, for example, aims to turn aircraft around within 25 minutes of arrival and offers passenger service charges 30% less than the other two terminals.

Air France has confirmed plans to launch “cheap medium-haul flights” from regional French cities. The strategy is aimed at boosting passenger numbers and reclaiming market share that has been ceded to low-cost carriers over the past decade.

The new strategy will start on 02-Oct-2011 in Marseille, when Air France will launch 13 new services to destinations in France, Eastern Europe, Scandinavia, North Africa and the Mediterranean. The carrier will adopt LCC marketing tactics, advertising the services as one-way fares with all-in prices starting at EUR50. Destinations offered will include Biarritz, Milan, Prague, Moscow, Beirut and Casablanca. Despite plans to keep a lid on costs, Air France has emphasised passengers will be treated to all the service one would expect on an Air France flight, at prices offered by easyJet or Ryanair. This tactic, in which a full-service carrier competes against a low-cost carrier by lowering or simply matching pricing, has been employed by many legacy carriers before, with largely predictable results. Doing so is usually a short-term strategy to defend market share and fails because the reduction in price cannot be matched by the required corresponding reduction in costs to achieve profitability.

"The implementation of this new strategy is based on a significant reduction in operational costs, of around 1%," Air France announced. To keep costs down, Air France will use a single aircraft type (the A320) across the regional bases.  Schedules will be optimised to allow smoother connections and increase attractiveness to customers. The less-congested regional airports should allow average aircraft turnarounds to be reduced to 25-30 minutes, allowing the assets to achieve utilisation of up to 12 hours per day, up from the current nine. A major part of the strategy is that the crews will be based locally. For Air France, that means relocating Paris-based crews to regional cities, and as CEO Pierre-Henri Gourgeon explained, asking them to work longer hours and expand their roles, which is expected to include work previously outsourced to ground-handling companies, such as aircraft cleaning. The CEO hopes the strategy "will enable its medium-haul operations to regain profitable growth."  EVP Marketing, Bruno Matheu, expects it to increased passenger numbers by four million p/a from 2012, up from the current 45 million. Mr Matheu also expects it to generate an extra EUR400 to 500 million in annual revenue.

The model will be rolled out to other French cities, including Nice, Toulouse and Bordeux in 2012. The model will be adapted to suit the conditions of the smaller Bordeaux market, which is likely to be served using smaller Embraer aircraft, rather than A320s.

What Air France needs most, and what is likely to be the biggest challenge with the plan is the flexibility among its staff. The highly unionised labour force is likely to remain rigid and will not easily grant the airline concessions, further delaying Air France’s response to the LCC and TGV threat. The date for launching the strategy at Marseille has been pushed back to Oct-2011 to allow more consultations with unions.

SNPL, which represents Air France pilots, has accepted the strategy by a 54.5% majority in a ballot this week. But cabin crew are proving to be a much larger hurdle. SNPNC represents Air France cabin staff and talks between the airline and the union collapsed last week. Negotiations reached a stalemate over issues including reduced rest periods and a lower hourly pay rate, the union’s president Fatiha Aggoune said. Crew will be required to adopt a new approach to work, given management’s focus on working them harder and expanding their roles, much like the roles assumed by crew at LCCs. This is will require new contractual conditions to be provided by Air France.

Entrenched legacy practices have been one of the major problems of LCCs launched as offshoots of full-service carriers. These issues tend to be exacerbated when the LCC's workforce is simply seconded from the mainline, full-service carrier. In order to compete with the LCCs, Air France must secure agreements akin to those offered by LCCs. If it is unable to, the strategy will not yield the anticipated benefits and the airline’s short-haul competitive positioning will remain weak.

Costs to be squeezed out of mainline too

While the history books are littered with failed LCC offshoots, Air France’s strategy differs from others in that it does not involve the launch of any subsidiary. Rather, costs are to be reduced through the adoption of many characteristics that define the low-cost model, but these characteristics will be passed through the mainline airline. All airlines strive to be low-cost, not necessarily in terms of service standards but certainly in terms of keeping the cost side of the ledger down. But when trying to compete against LCCs using an LCC model, the preferred strategy has been to launch a subsidiary and give it as much independence as possible.

Air France’s transition from one of Europe’s most established full-service carriers to a low-cost competitor will be its largest hurdle. The move will require a substantial - and unlikely - shift in corporate culture from a workforce that has an entrenched legacy mindset.