Air France-KLM (+3.6%) gained after announcing the day prior that unit revenue per ASK (RASK), excluding currency, was up significantly year-on-year. This increase was more pronounced in Economy class than in Premium class.

Cimber Sterling (+2.4%) was also up after the carrier reported a 26% year-on-year increase in passenger numbers for Mar-2010, to 216,181. Load factor rose 11 ppts, to 69%, as traffic rose 79% and capacity increased 49%. But Feb-2010 yield fell 32% year-on-year, attributed to the changed product mix (increased leisure production), the “extraordinarily keen” competition and falling industry demand. The change in product mix accounted for 61% of the yield decline.

SAS (-6.3%) was meanwhile one of few decliners for the day, after the carrier adjusted the conversion price on its SEK1.60 billion of convertible bonds due 2015 with an annual coupon of 7.5%. The adjustment was undertaken due to the carrier's SEK5 billion rights issue, approved by the Annual General Meeting on 07-Apr-2010. Following the adjustment, the Bonds will carry a conversion price of SEK1.55.

Also during trading, the group reported a 2.1% improvement in passenger numbers for Mar-2010, to 2.2 million. Scandinavian Airlines, Widerøe and Blue1 all reported improved load factors, as increases in traffic (RPK) outweighed reductions in capacity ASK). Blue1 was the only carrier not to reduce capacity during the month, instead increasing it by 0.8%.

Currency adjusted yield for SAS in Feb-2010 was down by 10.5% and RASK was down 0.7%, due to the improvement of the load factor. SAS stated, "it should however be noted that the yield was positive during last year, mainly due to higher fuel surcharges imposed in early 2009. For Mar-2010, the change in yield is also expected to be negative. The market continues to be unpredictable and the uncertainty regarding the timing of a recovery is considerable". 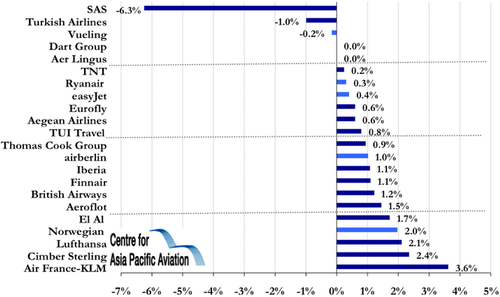