European airline shares were mixed on Friday (10-Sep-2010) as wider markets slipped with a decline in the banking sector ahead of the release of the Basel III rules on capital requirements. A solid gain in oil prices (+3.0%), to USD76.45, also pushed some airline shares lower.

Air France-KLM looks to gear up competition against LCCs

Air France-KLM (-0.2%) slipped. It was reported over the weekend that the group’s pilots reportedly favour a project to have more pilots based at provincial French airports such as Marseille, Nice and Toulouse in a bid to gain market share from easyJet (+0.8%) and Ryanair (+0.4%) on domestic routes.

Lufthansa (-0.2%) CEO, Wolfgang Mayrhuber, stated during trading that the carrier views competition from Gulf airlines as a growing and serious threats to Lufthansa and other European carriers. Mr Mayrhuber also commented that the German Government's planned tax on passengers could endanger investment like a "lead weight", adding that the air tax, which is expected to raise EUR1 billion p/a, is comparable to the combined operating results of all airlines in Germany in a good year.

Ryanair (+0.4%) gained marginally for the day. CEO, Michael O’Leary, also over the weekend stated the carrier plans to move away from its “pile it high and sell it cheap” strategy, as its average fare of EUR40 is unsustainable due to cost pressures as it moves to airports closer to city centres. Mr O’Leary also commented Ryanair will require a new CEO as growth slows, as his controversial management style would not be suitable in a more mature business. He added the carrier will need to become a more sophisticated business, promoting attributes other than its cheap fares. Mr O’Leary expects to remain at the carrier until it almost doubles in size. 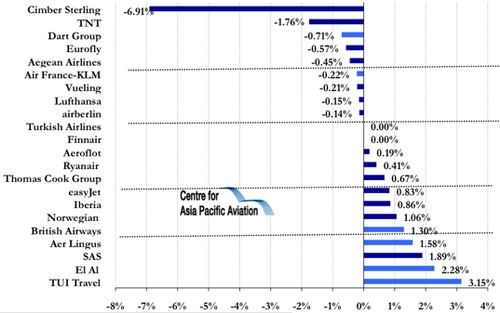