The COVID-19 pandemic continues to wreak havoc on airlines worldwide, but Air Canada faces an added layer of uncertainty as Canada remains largely closed off for travel, with no target date for the lifting of restrictions.

Air Canada continues to cut costs, build liquidity and rightsize its operations, which includes its ongoing efforts to retire 79 aircraft from its fleet and shrink its network footprint.

There is also little doubt that Air Canada will need to adjust its aircraft order book as the company’s planned CAD3 billion capex for 2021 is not conducive to operating during a pandemic. As uncertainty over when Canada will ease restrictions remains firmly in place, the airline is already warning that it could possibly cancel orders for Airbus A220s and Boeing jets.

Air Canada is planning an 80% decrease in its capacity year-on-year in 3Q2020, which is an improvement over the 92% drop in 2Q2020 but still far below what previusly normal levels.

At the start of 2020 Air Canada operated to 220 airports; but once the pandemic set in, the airline suspended flights to the US throughout most of May-2020 and limited its international network to five vital air markets to ensure sustained connectivity to Canada, according to Air Canada chief commercial officer Lucie Guillemette.

The airline cut its domestic network from 62 to 40 airports. The company has also indefinitely suspended 30 regional routes within Canada and closed stations at eight smaller airports in the country.

During the current summer high season in the Northern Hemisphere, Air Canada plans to operate to 91 destinations, which is close to double the number offered by the airline in May-2020.

CAPA’s fleet database shows that as of early Aug-2020, Air Canada group had 81 aircraft in service and 166 inactive. 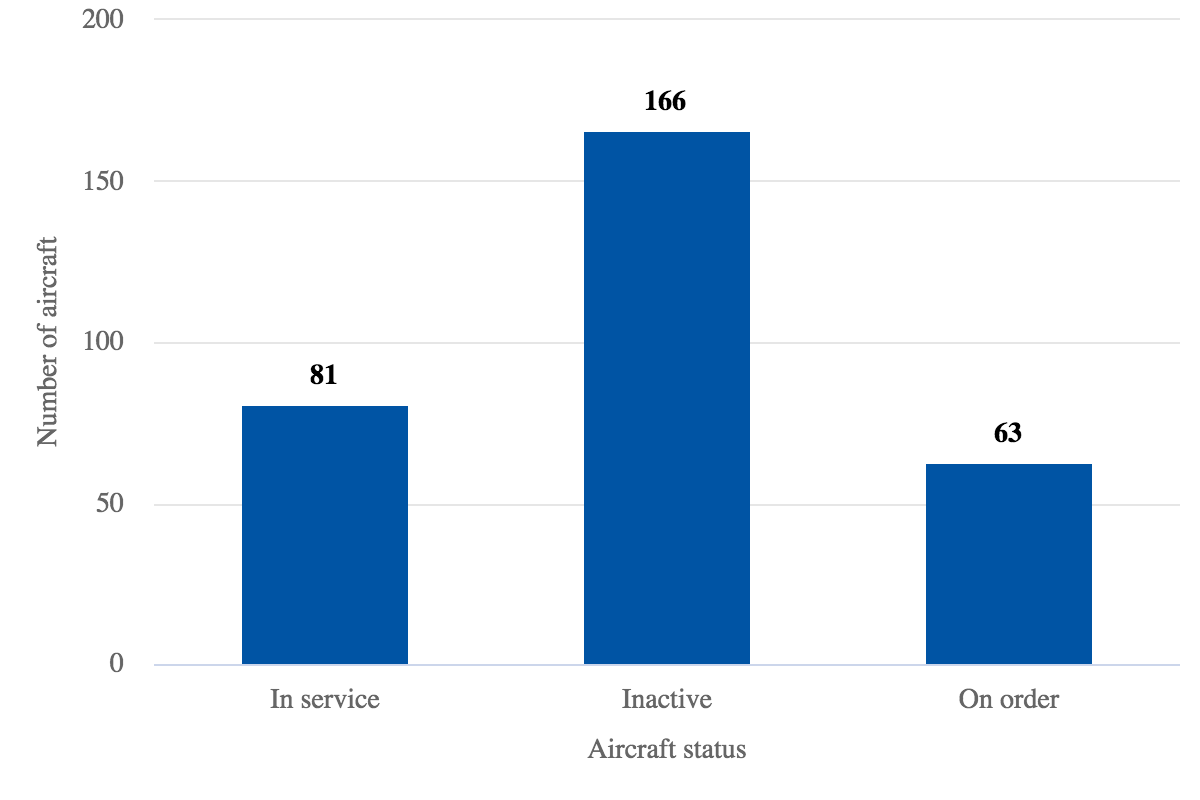 Air Canada has identified some signs of domestic recovery, said Ms Guillemette, particularly on transcontinental routes and in Western Canada, but she said that the market rebound will be uneven, as the “maritimes continues to be impaired by interprovincial travel restrictions, while Ontario and Québec lagged behind the western provinces in terms of reopening our economy”.

For the week of 3-Aug-2020, Air Canada’s domestic seat share was nearly 44%, followed by WestJet at approximately 37%.

Air Canada CEO Calin Rovinescu explained that Canada’s domestic environment has been influenced by Porter Airlines choosing not “[to] operate over the last number of months”. Porter suspended its operations in Mar-2020 and does not plan to resume service until early Oct-2020.

Mr Rovinescu also remarked that Transat had engaged in some domestic activity, basically to position flights for international operations.

Essentially, Air Canada and WestJet remain the major operators in the domestic market, and Mr Rovinescu stated that “neither carrier has sought to use the pandemic as a way of gaining market share”.

Air Canada continues to be constrained by Canada's travel restrictions

Offering a short summary of the restrictions, Mr Rovinescu said they include a blanket restriction on all foreign travellers, the closure of the Canada-US border, blanket quarantine rules, and interprovincial travel barriers. All travellers entering Canada, including Canadians, must quarantine for 14 days.

Outlining the effects of those restraints on Air Canada during 2Q2020, Mr Rovinescu said: “With Canada’s federal and interprovincial restrictions, which have been amongst the most severe in the world, we carried less than 4% of the carrier's customers during last year’s second quarter [2Q2019]”.

Air Canada is not assuming that the US-Canada border will reopen in 3Q2020, said CFO Michael Rousseau.

As yet there is no certainty when Canada will ease its travel restrictions and that uncertainty, coupled with what could be a prolonged recovery, has resulted in Air Canada opting to retire 79 aircraft permanently. The airline removed 50 of those aircraft from its fleet in 2Q2020 – 14 Embraer 190s, 30 Boeing 767 widebodies, and six Airbus A319s.

Mr Rovinescu noted that Air Canada would hold on to the remainder of the A319s, “a little bit longer because most of them are owned…and they give us a little bit of flexibility to gauge up or add more capacity and they’re very, very low cost from our perspective”.

At the moment, Air Canada’s focus is returning the 767 widebodies and the Embraer 190s.

Air Canada has raised approximately CAD5 billion in liquidity since mid-Mar-2020 to boost its total liquidity to approximately CAD9 billion at the end of 2Q2020. At the same time, the company has stripped out CAD1.3 billion of fixed costs and capital investments.

During 2Q2020 Air Canada received CAD202 million to cover a portion of employee wages. The programme is being redesigned and extended to Dec-2020 and Air Canada aims to participate, subject to meeting eligibility requirements. But even with that assistance, Air Canada has cut its staff by 20% through layoffs, terminations, voluntary separations and early retirements.

The airline’s CFO Mr Rousseau has stated that the CAD3 billion estimate is a very conservative number, and based on the number of aircraft “we’re going to take in, though the delivery schedule for the 737 [MAX] is not yet finalised”.

As Air Canada continues discussions with Boeing, Mr Rousseau has explained that amount would be spread over a little longer period of time, “and that capital [CAD]3 billion will drop next year”.

Mr Rovinescu warned that “…without government industry support and as travel restrictions are extended, we will look at other opportunities to further reduce costs and capital, including further route suspensions and possible cancellations of Boeing and Airbus aircraft on order, including the Airbus A220, the former Bombardier C Series manufactured at Mirabel, Québec”.

Air Canada’s CEO has been attempting to urge Canada’s government to take a different approach to manage travel to and from and within the country, and the airline has been vocal over the course of the past few weeks in attempting to persuade the government to adopt a science-based approach in its evaluation of travel boundaries.

“Canada needs to find a responsible way to coexist with COVID-19 until there is a vaccine”, Mr Rovinescu said. He added that the airline had entered into partnerships with private testing firms and had made specific science-based proposals to government to ease some of these restrictions.

Air Canada is taking the necessary steps to weather the COVID-19 pandemic and the uncertainty that Canada’s travel restrictions are creating for any recovery in demand.

The company continues its efforts to urge the government to adopt a different approach so the airline industry can restart in earnest, but for now, the status quo remains. And, as numerous examples suggest, the further hurdle to cross is the real constraint to growth, passenger wariness about flying.