Air Canada preparing for USD1bn in aircraft in 2013

Having spent the past 18 months scrambling from the brink of financial ruin again, Air Canada is using the next three years to deleverage its balance sheet and prepare for the delivery of the Boeing 787, Chief Financial Office Michael Rousseau told the CIBC Eastern Institutional Invester Conference last week.

The only surviving legacy carrier in the country, Air Canada has met many of its objectives, said Rousseau, by building adequate liquidity, expanding its international network, maximising revenues and lowering cost, four key principals it continues to follow to reach the goal of a sustainably healthy airline. Its key priorities include more of what the company is doing, expanding internationally, improving revenue, cost reduction through its new cost transformation programme and fostering culture and change throughout the company.

The 15th largest airline in the world, despite the fact that the country ranks 36th in population, Air Canada has one revenue initiative that seems to be working. It has added several secondary market destinations in the US – including Memphis, Syracuse, Cincinnati, Portland, Oregon, and Portland, Maine, San Diego and Orange County – to lure passengers away from US competitors to connect to Asian and European destinations through its Toronto. It is also adding New Orleans shortly.

“We are leveraging our strong international network connections,” he said. “Often the fastest and easiest route to Asia or Europe is through one of our Canadian hubs so we are aggressively marketing that. This strategy has been working. Between the US and international destinations we have more than doubled the number of passengers connecting through our hubs since last year.”

The gambit offsets its declining market share as WestJet grows its presence and is probably the reason US carriers are now beefing up Canadian services. But Air Canada remains the largest provider of scheduled passenger services in the domestic, trans-border market based on available seat miles. Rousseau indicated that despite its declining market share the market growth of the various markets have yielded stronger revenues for the carrier. 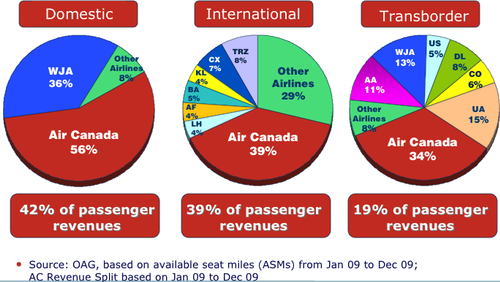 The carrier is relying heavily on its membership in the Star Alliance and Rousseau noted that the A++ joint venture across the Atlantic is yielding revenue benefits.

“The value of the A++ is not only revenue but increasing our presence in several US and international markets and the ability to sell seats on other member carriers,” he said. “It gives us a virtual airline and a single network.” 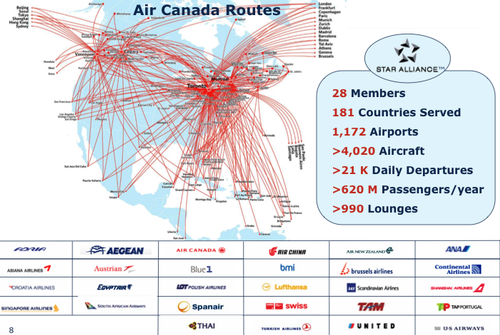 As with its mainline counterparts around the world, its focus is on burgeoning international traffic and its higher margin contribution. It has added several new routes to capitalise on this trend, especially to Japan and China. Rousseau, who said Air Canada is doubling its capacity between China and Toronto this fall, touted not only its strong international brand but its sixth freedom rights from the US. He also noted that the expansion was accomplished without adding incremental aircraft. Rather the airline increased its aircraft use by almost 5% to more than 9.5 hours per aircraft, has benefited from partner’s network feed and is maintaining the fleet more effectively. 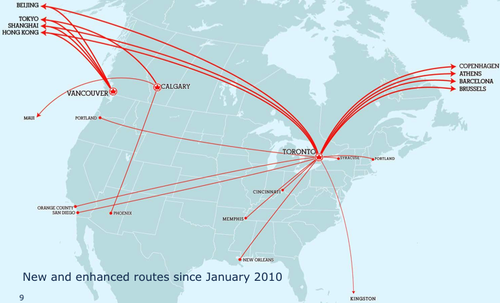 Indeed, the company is not expecting any fleet changes until the 787s arrive in the second half of 2013 meaning that capex is expected to be below CAD150 million until then, excluding maintenance expenses which are being recorded under new international financial accounting rules. But it already has financing committments in place for CAD3.1 billion covering 31 of the 37 aircraft. The idea is to replace its aging 767s while bringing on board a more cost-effective aircraft that affords growth opportunities to new markets at greater profit margins. 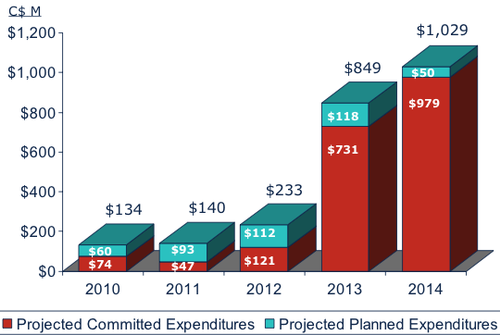 When asked about the prospects of the Bombardier CSeries joining the Air Canada fleet, Rousseau said, the company was keeping that door open. “We just bought our Embraers in the last couple of years,” he said. “The CSeries also overlaps with the Airbus A320/319 so if anything is to happen it would be in the back half of the decade.”

The airline is also banking on its improving reputation amongst customers and Rousseau ticked off a number of customer satisfaction awards the carrier has received over the past year. He cited another company initiative as the reason – more engaged employees – along with marketing and policy changes. Air Canada has been wooing its employees giving them more autonomy to resolve customer service problems sooner.

Indeed, with 6% of the company owned by employees, Air Canada is winning over their hearts and minds to the point where they extended labour agreements 21 months on a cost-neutral basis through the first quarter of 2011. They have also agreed to a moratorium on past pension service payments for eight months ending 31-Dec-2010 with fixed payments thereafter including CAD150million in 2011, CAD175 million in 2012 and CAD225 million in 2013. Air Canada issued 17.6 million Class B shares – 6% of total issued and outstanding shares – to the a trust, the proceeds of which will be contributed to the pension plans.

“This gives us the flexibility that allows us to manage through our next set of priorties,” said Rousseau.

In addition to employee efforts over the past few years, the company has also increased its liquidity with a private note offering totaling CAD1.1 billion in August with CAD729 million used to repay 2009 secured term credit facility. It also achieved aircraft loan commitments of USD170 million for 2011 and 2012 representing balloon payments. In addition, it did a CAD115 million sale-and-leaseback deal on three Boeing 777s and accepted a new secure provider for credit card processing services in North America for both Visa and Mastercard.

“Our cash levels reached CAD2 billion in the second quarter well above our target level of 15% of 12 months operating revenues,” he said. But the problem with that is the fact that debt constitutes fully 95% of that with only 5% equity meaning the company is more highly leveraged that its competitors.

“Over time we need a better balance,” he said, using language that suggested it was more of a hope than a critical necessity. “We’d like to deleverage our balance sheet and the most inexpensive way to do that is by producing free cash flow to pay down debt. We have almost a billion dollars of debt coming due in the next two yaers and certainly we would like to pay some, if not all, of that back.”

Its cost reduction programme has been at the heart of its efforts as Air Canada has watched costs beyond its control rise. Rousseau went through a litany of rising costs including airport rents, infrastructure and fees, security charges and fees, fuel excise taxes and navigation fees, saying that these, and other direct or indirect taxes results in it being significantly more expensive to operate in Canada than it does in the US.

For that reason, the carrier implemented its cost transformation programme (CTP) which has been so successful, Air Canada increased its 2010 target from CAD270 million to CAD300 million in August. The company identified 125 different initiatives for cost reduction.

“The expected annual benefits on a run-rate basis is CAD 300 million by the end of 2010 and CAD530 million by the end of 2011,” he said. “Individual benefits range from CAD100,000 to CAD40 million. About CAD275 million of this year’s benefits have already been achieved as has CAD300 million of the full CAD530 million target. CAD200 million resulted from contract improvements; CAD160 million from operations processes and productivity improvements and CAD170 million from revenue optimization.” 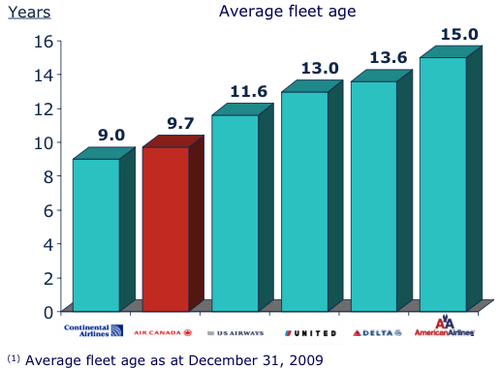 The signs of an improving economy for Air Canada includes an increase of system passenger revenue of 12.9% or CAD256 million on traffic growth and system yield improvement. It also experienced a 30.7% increase in premium class revenue which, while impressive, is still below 2008 levels. 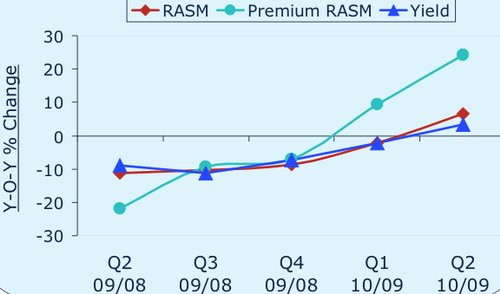 Rousseau also ticked off the company’s improving yields with system yield up 3.3% led by a 12.9% increase in premium cabin yield for the second quarter. He said cargo revenues are up 40% on a 55% growth in traffic, however, one has to remember the deep pit cargo fell into during the recession.

For the next year or so -- 2010 and 2011 -- it will continue expansion of its international operations while keeping domestic capacity at a limited 1% growth rate.

“We're being very, very disciplined about adding capacity,” he told investors. “We have route rights to virtually everywhere in the world, so we fly where we want to. We even have unused route rights. But we need to make money. Our commercial and finance groups look very, very closely at the market and the competitive environment and, if there is an opportunity for us, we'll look at it. Right now, we don't see those opportunities and, as such, there are no plans to bring new planes in next year.” 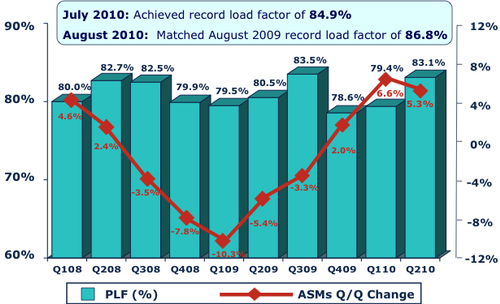