Shares in Air Berlin remained unchanged on 05-Jul-2010, the same day the German LCC announced an increase in its shareholding in NIKI Luftfahrt GmbH, implementing the agreements notarised in Feb-2010.

Air Berlin indirectly acquired 25.9% of the shares in NIKI from the Privatstiftung Lauda (private Lauda foundation), increasing its current shareholding to 49.9%, at a purchase price of EUR21 million.

Air Berlin will grant the private Lauda foundation a EUR40.5 million loan. The private foundation has the option to repay the loan in three years with cash or through the transfer of the remaining 50.1% of NIKI shares.

The carrier added that, within the Air Berlin group, NIKI would be fully consolidated. It will remain a legally independent company with its own management, while the NIKI brand will be maintained for the “foreseeable future”. 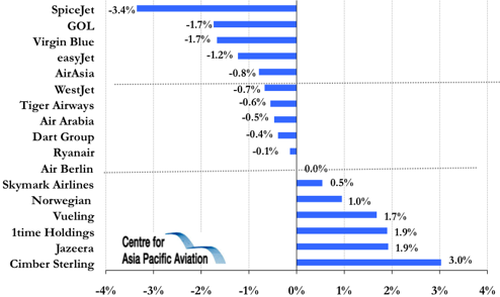