1time’s (+0.0%) shares were flat on Thursday (28-Jan-2010) despite news the carrier, along with British Airways, Comair, South African Airways (SAA), SA Airlink and SA Express, will be investigated by South Africa’s Competition Commission for “alleged collusion” over fare prices during the 2010 FIFA World Cup in South Africa.

1time denied any involvement. The investigation is reportedly based on information from SAA. 1time CEO, Rodney James, told Bloomberg, “We do not communicate with SAA at all, not by e-mail or any means. We are fierce competitors, we certainly don’t talk to them about pricing issues”.

The Centre for Asia Pacific Aviation (CAPA) has launch a unique new strategic business information service covering one of the world’s most exciting emerging aviation markets. Middle East-Africa Airline Daily is an efficient morning briefing on airline developments from both regions. Covering fleets, routes, financials, traffic, bilateral agreements, alliances, financing, ownership, along with analysis of all significant developments, it is your one-stop shop to aviation news from Africa and the Middle East – and best of all it’s free for a limited time. Sign-up today! 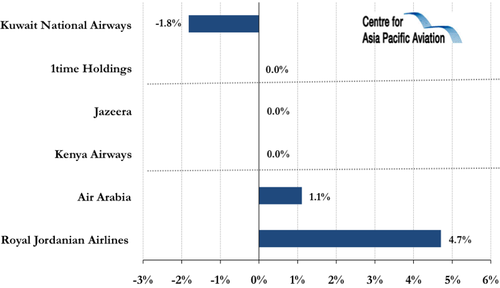