Just a few years ago, the North Asia aviation industry stood out because of the rigidity of its regulatory regimes. But much has changed in the past couple of years. A combination of traffic growth, new entry and accompanying liberalising trends is reshaping what is potentially a massive intra-regional market. 01-Mar-2012 marked another landmark date in this change, with Peach Aviation launching operations with a flight from its Osaka Kansai base to Sapporo New Chitose, an event Peach Aviation CEO Shinichi Inoue said “opens a new era of the Japanese airline industry”. With two more low-cost airline subsidiaries preparing to launch services later this year and home-grown low-cost operator Skymark planning to spread its wings internationally, Japan is standing out as the key driver of change in the North Asian aviation market.

The start of domestic operations at Peach, which labels itself as the first “genuine LCC” in Japan despite Skymark’s presence in the market, is likely to intensify competition in the aviation and rail sector within Japan. Its entry, even after only one day, is having an impact, triggering fare reductions and route launches by Skymark on key Peach routes.

In its first phase of operations, Peach, backed by All Nippon Airways (ANA) and First Eastern Investment Group, will operate three times daily to Sapporo and four times daily to Fukuoka from its Osaka Kansai base.  Peach is competing with its parent ANA and Japan Airlines (JAL) on the Osaka Kansai-Sapporo sector, with Skymark reacting to Peach’s entrance with plans to launch operations on the route later this month.

On the Osaka Kansai-Fukuoka sector, Peach is competing only with ANA, offering services catered to two entirely different markets – ANA the premium market and Peach at the other end of the spectrum with services targeted at price-sensitive consumers. 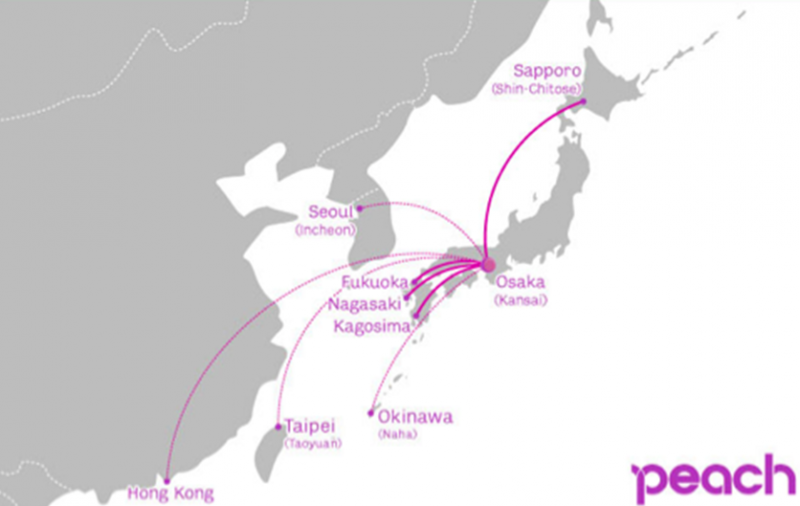 In May-2012, the first international route between Osaka Kansai and Seoul Incheon will commence. Korean Air, Asiana Airlines, Jeju Air and ANA already operate on this route, with Peach to become the second LCC and first Japanese LCC operating between Osaka and Seoul.

Furthermore, three more routes including Okinawa Naha, Hong Kong and Taiwan Taoyuan are slated to be launched during summer 2012. Osaka Kansai-Okinawa Naha sector will see a significant influx of capacity with Skymark to join the two incumbents, ANA and JAL, on the sector later this month and with Japan Transocean Air to commence operations on the route in Jul-2012.

All Peach services will be operated with 180-seat A320s, with the carrier planning to lease 10 A320s within the first five years. The carrier has said it is offering fares for less than a third of the price offered by full service carriers.

By progressively expanding domestic and international operations, the airline aims to handle 6 million passengers p/a after five years, accounting for around 40% of current Osaka Kansai Airport traffic. “I'm confident that the airline will cause a major sensation in Kansai,” says ANA President Shinichiro Ito.

A North Asian LCC explosion is under way: 200 million passengers a year

Two other new LCCs are planning to launch in Japan later this year with bases at Tokyo Narita - Jetstar Japan and AirAsia Japan, which will be ANA’s second LCC venture. Jetstar Japan earlier this month brought forward its launch date to 03-Jul-2012, five months earlier than the previously announced Dec-2012, and confirmed an initial network of five major Japanese cities: Tokyo Narita, Osaka, Sapporo, Fukuoka and Okinawa. This move appears to be a clear attempt to upstage incoming competitors. AirAsia Japan’s launch is currently scheduled for Aug-2012 although this too is subject to change, depending on the availability of aircraft.

With three new LCCs, there will likely be a stiff battle in the Japanese market, with Sapporo New Chitose and Fukuoka featuring as launch destinations for all three operators. About 10 foreign LCCs, including China’s Spring Airlines and South Korea’s Air Busan, also operate services into Japan. Most of these carriers will be impacted by the launch of the three Japanese LCCs.

In a study undertaken several years ago, CAPA estimated the north Asian triangle market (Japan, South Korea, Northeastern China) potential at over 200 million passengers a year - such is the potential, as economic growth permeates the region. But this would depend on substantial liberalisation of access and removal of other restrictive regulatory conditions in the Japan-Korea-North China triangle.

The density and economic evolution of the sub-region’s urban markets is so startling that even this figure could be substantially under-estimated. That does, however, assume more comprehensive regulatory relaxation than is likely in the short term. If allowed to fly unrestricted between regional gateways, there are other, independent, LCCs in the market such as Skymark and Spring Airlines that also have the potential to generate very high levels of growth.

But it is necessary to compare the low penetration rates of LCCs in North Asia with those elsewhere in Asia to see the potential upside. LCCs now account for less than 4% of total international capacity (seats) to/from Japan at present, according to Innovata data. LCC penetration within Japan also remains very low, at 16% currently.

Comparatively, intra Asia Pacific LCC capacity share stood at 19% in 2011. This situation creates significant opportunities for the three incoming LCCs in view of the present under-exploitation of the market.  And, the opportunities extend beyond the domestic Japanese market.

Already, five of the world’s top 10 largest city pair routes by seats are within North Asia, led by Jeju-Seoul Gimpo, Tokyo Haneda-Sapporo Chitose and Fukuoka-Tokyo Haneda, all with more than 170,000 weekly seats. A further three intra-North Asia routes are among the 15 largest city pairs in the world. Each, with the exception of the diminishing Hong Kong-Taipei sector, is a domestic route, where international regulatory constraints do not restrict airline activity, but rather serve as an indicator of what might be possible when the barriers are removed. 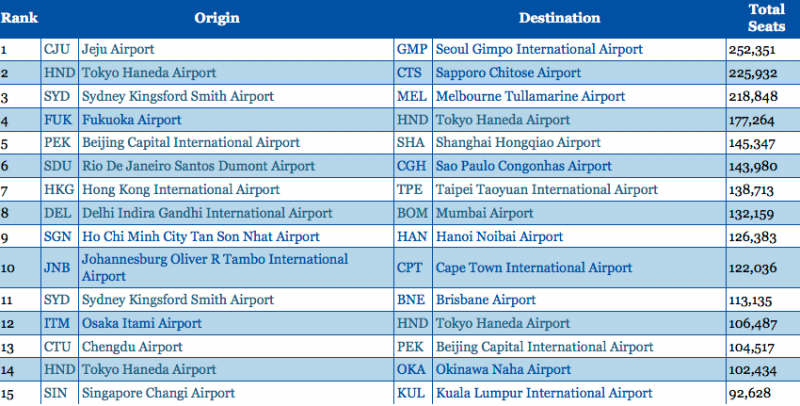