flydubai edging towards profitability, making it the fourth profitable carrier in the UAE

flydubai looks like it is set to join sister carrier Emirates in the black this year, according to CEO Ghaith al Ghaith. While it is too early for the carrier to provide an estimated figure, Mr Al Ghaith, talking to Gulf News, said flydubai expects to make a profit in what is just its third full year of operations. However, the CEO expects a "difficult year with the increase in oil prices".

The carrier’s regional LCC peers, Air Arabia and Jazeera Airways, were both profitable last year and are also both anticipating strong results in 2012, albeit again with caveats about the price of oil. Air Arabia’s overall costs per passenger rose 10.4% in 2011, but unit costs excluding fuel dropped 6%. Jazeera Airways’ fuel bill in 2011 was up by KWD4.5 million (USD16.2 million), despite an overall 28% reduction in capacity during the year.

Another financially healthy carrier in the UAE

flydubai was launched in Jun-2009 as another string in Dubai’s aviation-driven growth strategy. The carrier is 100% owned by the Emirate of Dubai.

The carrier targets markets – both geographic and economic – that Emirates passes over with its premium-focused product, network and all-widebody fleet, although the two carriers are increasingly overlapping. Around half of flydubai’s network is also covered by Emirates, predominantly in the Middle East.

The two carriers also have an interline agreement, with Emirates providing connections to 25 flydubai destinations. The two are independently managed.

flydubai has expanded at a pace that is unusually rapid, even for the Middle East. Over the first 18 months of operations, it launched 31 routes.

In 2011 the carrier took delivery of 10 Boeing 737-800s and used the aircraft to launch 18 new destinations. flydubai’s network covers 21 destinations across the Middle East and another 10 in South Asia. It is becoming increasingly strongly linked with Eastern Europe and East Africa, opening new routes and developing underserved markets. 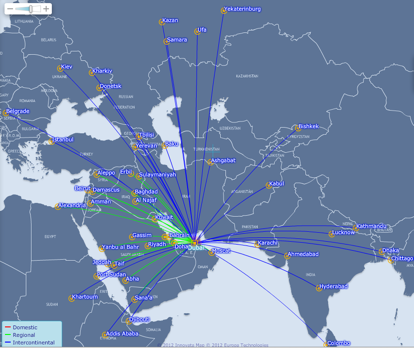 2012 will see the carrier’s rate of growth slow mildly. Another four new aircraft are to join its fleet, taking the total to 27 aircraft by the end of the year. The carrier will continue to roll out new destinations. It has already added four new destinations this year, with Sanaa added on 22-Apr-2012, becoming the carrier’s 51stdestination. The remainder of its orders for 54 737NGs are due to be delivered by the end of 2016.

UAE carriers among the most profitable in the Middle East

What is remarkable about flydubai’s performance is that the compact UAE now has four major airlines that are either operating profitably or at least close to breaking even. Between them Emirates, Etihad Airways, Air Arabia and flydubai operate 288 aircraft and have another 390 on order.

Emirates is the grand-daddy of UAE carriers with a fleet of 171 aircraft. It has reported region-leading profitability for more than a decade. Due to fuel costs and fluctuating exchange rates, the carrier expects its FY2011/12 results to be well below the previous year’s record USD1.6 billion. Its first half results sunk 76% year-on-year, to USD225 million.

Abu Dhabi-based Etihad Airways had its maiden profit in 2011, with a comparatively modest USD14 million. The airline anticipates another positive result this year, at the same time as expanding its traffic to a milestone 10 million passengers.

Air Arabia, the Middle East’s oldest and largest LCC, reported a healthy USD74.6 million profit in 2011. This was down 6% on the previous year’s result but maintains the carrier’s string of seven consecutive annual profits.

All four of these carriers are state-owned. Emirates, Etihad Airways and flydubai are all 100% government controlled, while the Emirate of Sharjah has retained a 45% stake in Air Arabia. Detractors will be quick to say this is because of subsidies, which have proven to be unfounded.

Mixed profitability outside of the UAE

Outside of the UAE, the bottom lines of Middle Eastern carriers are far more mixed, with just a handful of carriers in the region achieving consistent profitability. Lebanon's Middle East Airlines is among the standouts, with net profits every year since 2002, although the airline has yet to report its 2011 result.

Qatar Airways CEO, Akbar Al Baker, claims his carrier has achieved profits in six of the past 14 years. Although the carrier does not make its results public, the CEO announced a USD205 million result in FY2010/11 and said late last year that the airline expects to report another profitable figure result for the year to 31-Mar-2012.

EgyptAir posted a USD13.6 million profit for 2011, down 75% on the previous year’s result due to the fall out from the Arab Spring. Kuwait's Jazeera Airways earned a record USD38.1 million in 2011, having turned around two years of losses.

Matched against these positive results are the increasingly heavy losses reported at several of the smaller national carriers in the region. Oman Air just reported its heaviest ever net loss, at USD285 million, a result of intentionally growing to lay a network before focusing strictly on the bottom line.

Royal Jordanian Airlines also suffered a record loss, with red ink amounting to USD81 million. Gulf Air’s 2011 losses are reportedly in excess of USD500 million, although the Bahrain-based carrier has not publically reported its results.

The UAE’s state-driven aviation model has created an environment conducive to growth. There is competition between airlines in the country: Etihad CEO James Hogan is always quick to make the jab his mandate is not to be the biggest, like Emirates, but rather the best. The cooperative airline/airport model in each emirate is creating a rare nexus of profitability in the airline sector.