2011 was another expensive year for Oman Air. The carrier reported a record loss of OMR110 million (USD286 million) in 2011, a year that saw the carrier dealing with ballooning oil prices, regional political unrest and some problems with its own workforce.

This is the fourth consecutive annual loss suffered by the carrier. Since the Oman Government took majority ownership in early 2007, the airline has lost a staggering OMR295 million (USD766.9 million). The losses have not been surprising to anyone; the carrier and Government intentionally planned to ramp up expansion in the fast-growing market and then concentrate on profitability, taking the long-term view that setting the foundation blocks early – even if at a loss for some years ­– would yield a healthier profit in the future.

Traffic was again the most satisfactory part of Oman Air’s performance in 2012. The carrier handled 3.8 million passengers over the year, growth of 16.5% year-on-year. This is well above the regional average growth of 11.7%, an accomplishment not to be understated given the Middle East plays home to some of the most aggressively expanding carriers in the world. 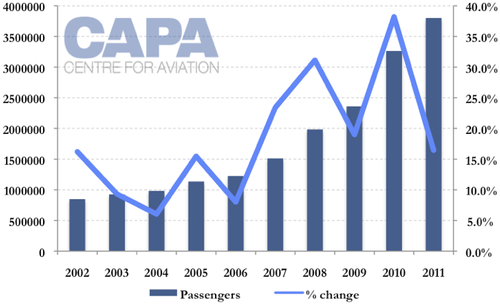 The growth result was even more pleasing given the regional disruption that occurred throughout the Middle East in the early part of the year. Oman saw only limited unrest, which had a marginal effect on traffic, predominately from European destinations. The Oman Airports Management Company reported record passenger numbers at Muscat and Salalah airports, which had combined traffic of slightly more than 7 million passengers in 2011, up 12.7% from the 6.2 million passengers handled in 2010.

Passenger load factors at Oman Air also improved, hitting 72.7%, up half a percentage point on 2011 and the strongest level at the carrier since 2007. Oman Air reported improving passenger yields, although did not reveal the extent of the increase. 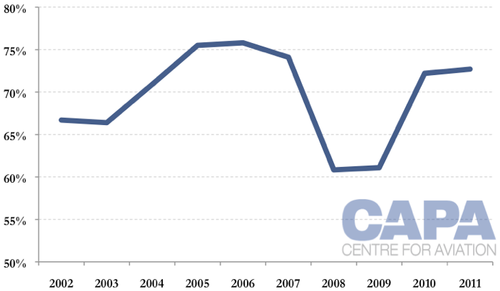 Cargo traffic was also strong, growing 13%. Oman Air has been increasingly expanding its presence in the cargo market, following the launch in Mar-2009 of Oman Air Cargo, which uses the belly space on passenger aircraft and does not operate any dedicated freighters. The share of overall revenue generated by cargo has expanded from less than 1% in 2008 to approximately 12% in 2011.

Worryingly though, regional cargo capacity has been increasing faster than demand growth. IATA reported international FTKs in the Middle East grew 10.8%, well behind the 14.9% growth in AFTKs. Dedicated cargo carriers such as Emirates SkyCargo and Etihad’s Crystal Cargo have been busily adding high capacity widebody freighters into the market, while bellyhold capacity continues to expand as regional carriers take delivery of more passenger aircraft.

With the expanding passenger and cargo traffic, as well as growth in the company’s ground handling and catering businesses, revenue at Oman Air increased 35% to OMR311.3 million (USD808.5 million). Cargo revenue was up 28%, indicating improving cargo yields during the year.

The OMR110 million (USD286 million) net loss in 2011 compares to the previous year’s net loss of OMR78.7 million (USD204.5 million). During 2010, the Omani Government injected OMR200 million (USD518 million) into the carrier, with the expectation that as the carrier’s market penetration increased, its network and product matured and its awareness grew, the Government would start to see positive returns on its investment. 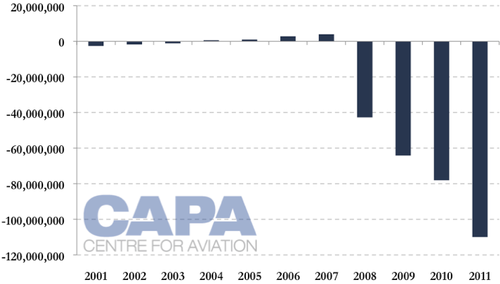 Since the Oman Government took ownership, the losses have been getting progressively larger, in line with the vision to expand first and then see profitability. 2011 was also Oman Air’s worst ever result, on a per passenger basis. The carrier lost OMR28.95 (USD75.22) for every passenger it handled during 2011, an increase of a little over 20% compared to the per passenger loss in 2010. 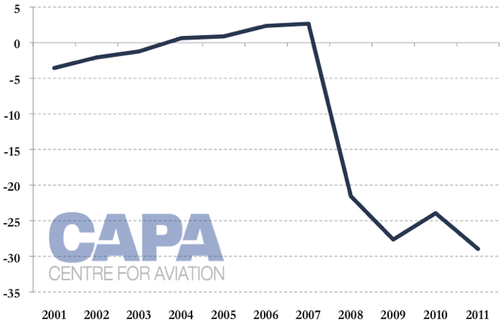 Fuel and staff costs blow out

Fuel and staff costs were cited as the primary contributing factors to Oman Air’s poor performance. Fuel costs soared 38% year-on-year, up OMR37 million (USD96 million) to OMR115 million (USD298.6 million). The carrier stated that it would have narrowed its overall loss compared to 2010 if not for the increase in fuel prices.

Staff costs increased by approximately OMR8 million (USD21 million) to OMR87 million (USD226 million) for the year. Early in the year, some Oman Air staff held demonstrations over pay and working conditions. The carrier stated it would accommodate the demands “as much as possible”, announcing increased wages and personal-cost allowances in Mar-2012 and establishing a committee to oversee promotions and examine staff disputes.

The company also attributed the ever increasing losses to its growth model and the service enhancements that it continues to roll out, as its seeks to compete in the high yielding premium markets.

The airline expanded capacity (ASKs) by 21% in 2011, adding two new Embraer E175s and two new routes to Zurich and Zanzibar. It introduced a number of new facilities, including premium lounges at Muscat, Bangkok and London.

The losses “represent investment by the government to build Oman Air to a size where it would be a profitable entity”, the carrier said. Oman Air is fundamentally tied into the Oman Government’s plan to diversify away from oil revenues, with the carrier an integral part of the country’s economic and tourism strategy, as well as a major local employer.

Despite the heavy losses, the Omani Government has announced that it will continue to support Oman Air. The country’s tourism and aviation strategies have become firmly interlinked and are now being more effectively coordinated, with Oman Air serving as the vessel of growth. The Omani Government plans to double the contribution of tourism to GDP from 3% to 6% by 2020, and desires a strong national carrier to meet this ambition.

The new CEO, Wayne Pearce, who joined the carrier earlier this year, faces a prospect much different from his predecessor. Since the Oman Government became the majority owner in 2007, Oman Air has expanded immensely. The airline has tripled its fleet size and added widebody, regional jet and turboprop aircraft. It branding and service ethos have been transformed and while the airline has no intention of playing in the same market as the Gulf’s sixth freedom carrier, it has become an important niche player. Mr Pearce must now oversee the less exciting task of bringing profitability.