Beijing Capital International Airport, the second busiest airport in 2011, has overtaken the world’s busiest airport by total passenger movements, Atlanta Hartsfield-Jackson International Airport, based on capacity (seats) data for the second week of Jan-2012, driven by increased traffic over the Spring Festival travel season, which commenced on 08-Jan-2012. CAAC has forecast a 7% year-on-year increase in passenger numbers to 34.9 million during the 40-day peak travel period, with domestic Chinese carriers' 8000 flights and capacity to transport one million passengers per day. However, Atlanta will regain its position once the Spring Festival traffic spike subsides, and will be the largest airport by passenger traffic in Jan-2012 as a whole. Beijing's temporary hold on the number one spot is a reminder that the title this year will return, and for the long term.

While capacity is being added through Beijing, the situation is slightly different in Atlanta. Southwest's acquisition of AirTran will see a 10-19% reduction in AirTran operations from Atlanta later this year. Southwest has stated it expects to keep 185-200 of AirTran's 220 daily services (as operated at the time of the buyout by Southwest) at Atlanta, with Southwest CCO Bob Jordan and AirTran president Bob Jordan noting that some routes that connect through Atlanta "really make sense to serve nonstop, over Atlanta, and avoid the connection." Meanwhile, Atlanta-based Delta plans to reduce capacity by up to 3% in 2012, following an up to 5% capacity reduction in 4Q2011.

Only a decade ago, Beijing Capital did not even rate among the world’s top 30 airports, a list that Atlanta has headed since 1998, when it overtook Chicago O’Hare, which was the world's dominant airport since 1961, according to the airport. Beijing first appeared as one of the world’s 30 largest airports in 2004 when 43% growth from the previous year saw it assume the title of 20th largest airport.

In other developments reflecting the global shift in passenger growth, Tokyo Haneda has also overtaken London Heathrow as the world’s third largest airport by capacity in the current week.

While an examination of capacity and frequency trends over the past decade highlight a stable upwards trend for Beijing and a weakening trend for Atlanta, Atlanta still ended 2011 as the world’s largest airport, for the 14th consecutive year, despite a noticeable decline in monthly seat capacity from a peak in Jan-2005. Over this time, seat capacity at Atlanta has weakened 9.3% compared to growth of 78.9% at Beijing. 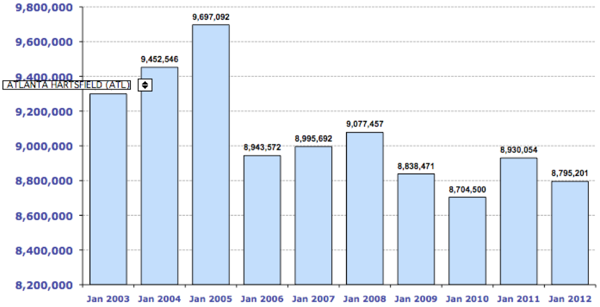 For Jan-2012, Atlanta also remains the largest airport by capacity based on forward capacity data for Jan-2012, based on OAG data, with 8.8 million monthly seats, compared to 8.4 million at Beijing. This means that at present, Atlanta has around 345,900 more weekly seats than its Chinese counterpart, equating to around a 4% difference in seats, despite Beijing Capital reporting stronger year-on-year growth rates in recent months. Atlanta is also operating around 62% more frequencies in Jan-2012 than Beijing. 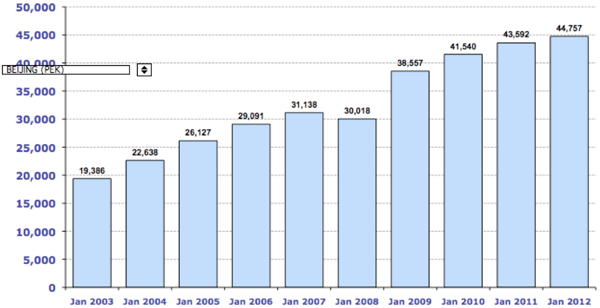 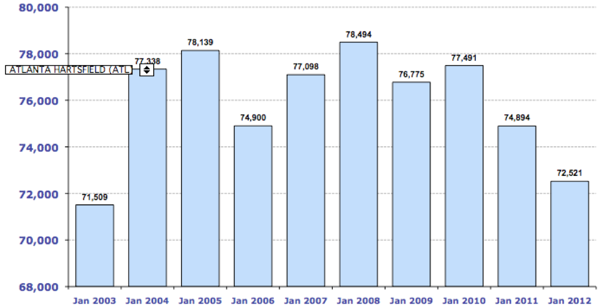 It is not a question of if, but when Beijing will overtake Atlanta as the world's largest airport on a monthly basis in 2012. And once it does, it is likely Beijing will hold onto its position as the world's largest airport for some time, like its predecessors in Atlanta and Chicago O'Hare have done. Beijing is planning for this growth, with Beijing building fresh airport capacity that will see it become the world's largest aviation hub, leaving London – currently the world's busiest system of airports – and even ambitious Dubai in its wake. Beijing's new airport at Daxing, south of the city, could have up to nine runways and ultimate capacity to handle around 370,000 passengers per day, or a staggering 135 million passengers p/a. This would increase capacity at Beijing area airports to around 220 million p/a – almost a quarter of a billion passengers.