Congested Beijing is building fresh airport capacity that will see it become the world's largest aviation hub, leaving London - currently the world's busiest system of airports - and even ambitious Dubai in its wake. Beijing's new airport at Daxing south of the city could have up to nine runways and ultimate capacity to handle around 370,000 passengers per day, or a staggering 135 million passengers p/a. This would increase capacity at Beijing area airports to around 220 million p/a - almost a quarter of a billion passengers.

Beijing's new airport will enable the nation's capital to keep up with rapid growth in demand, in line with the nation’s fast growing economy. The facility will ease pressures on Beijing Capital International Airport (BCIA), now the world’s second busiest airport after Atlanta, which is nearing its ultimate capacity of 85 million passengers. BCIA, which opened its Terminal 3 project only three years ago, handled 73.9 million passengers in 2010, up 13.1% year-on-year. Terminal 3 is the world’s largest airport building, with more space than all five terminals at London Heathrow combined.

Beijing Capital became the world’s second busiest airport last year and is now closing the gap to Atlanta, which handled 89.3 million passengers in 2010 (+1.5%). In reaching the number two spot, Beijing Capital leapfrogged London Heathrow, which has also dropped below Chicago O’Hare. Beijing was 14th globally as recently as five years ago with 41 million passengers, a figure now matched by airports in both Guangzhou and Shanghai.

Construction on Beijing Daxing is likely to commence late in 2011, a year later than originally anticipated, with total investment estimated of at least USD15 billion (CNY100 billion). The new airport, which is part of the government’s new Five-Year Plan announced earlier this year, will be constructed on a 21 sq mile (54 sqkm) site in Daxing. To put this in perspective, the site will be the same size as Bermuda and almost twice the size of Macau SAR. With nine runways (reported to include one military and eight civilian runways), the new airport will have the largest number of runways in the world. Denver International Airport currently leads the list with seven.

The new airport, which will be located 30 miles south of Beijing, is likely to exclusively handle burgeoning domestic and cargo traffic. BCIA is expected to lose many of its domestic services, which could pose significant operational and cost issues for airlines based in Beijing. So far this year, domestic passengers have outnumbered international four-to-one at Beijing Capital. 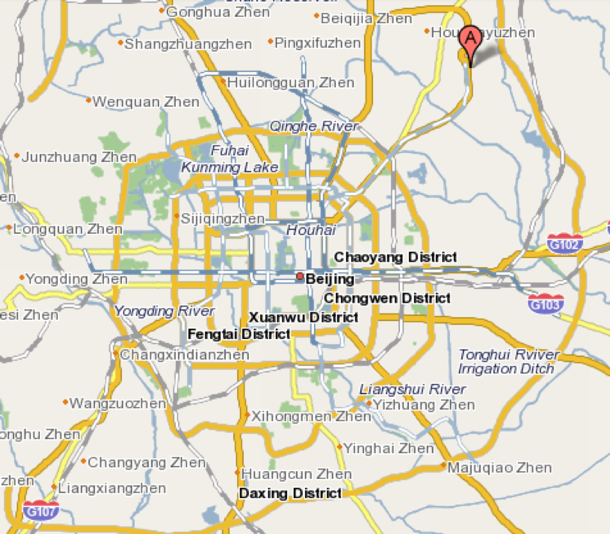 Beijing's 12th Five-Year Plan also calls for "connecting roads and matching services" for the new airport. Beijing is also set to announce several more high-speed rail lines to service both the Daxing and Capital airports, with links also expected to Tianjin, Shenyang, Shijiazhuang and Shanghai from both. This is in addition to the existing Beijing-Tianjin line and a new Beijing-Shanghai rail service that will open later this year. Other plans include extending Beijing’s subway system to 600 kms, up from the current 561 kms.

Construction on the runways and facilities at the new airport will commence before the end of 2011. The initial focus will be on land acquisition (the area is predominantly used for farming) and site clearing for a new airport. "The suggested location is a place with few residents and buildings, so a lot of runways can be built," said Wang Jian, the secretary general of the China Civil Airport Association.

The new facility is expected to serve not only Beijing, but also the two neighbouring cities and provinces of Tianjin and Hebei provinces.

Daxing will become Beijing’s third airport after BCIA and the semi-military Nanyuan Airport, which is also expanding. In Dec-2010, authorities noted the airport is expected to invest more than CNY200 million (USD30 million) in its expansion project to compliment Beijing Capital prior to the opening of Daxing. Upon completion, Nanyuan will have more than 20 civil aprons, up from 14 at present.

Beijing Municipal Government first revealed plans to construct a new airport in the city in 2002, with the opening originally expected ahead of the 2008 Beijing Olympics. However, it opted to expand Beijing Capital International Airport instead, as the site selection became a politically-charged issue.

China to invest USD8.3 billion on construction of 11 airports in 2011

CAAC plans to invest USD8.3 billion (CNY55 billion) on the construction of 11 airports around the country in 2011. Between 2006 and 2010, 33 airports underwent expansion, while 33 new airports were constructed, increasing airports in China to 175 at the end of 2010. Investment in aviation infrastructure during the nation’s 11th Five-Year Plan (ended 2010) totalled (USD37.9 billion).

The new Beijing project is part of a huge expansion of China's aviation industry, which will see the number of airports in the country increase from 175 to 230 over the next five years. The building boom is occurring not only at the nation’s largest airport, but also in secondary cities. China has over 100 cities with populations over one million and will have twice that number in a decade, highlighting the continued need to develop airport infrastructure to match the expected increase in air passenger traffic in coming years and decades.