Zurich, Munich and Vienna airports all reported noticeable reductions in passenger levels over the past 12 months, falling from growth in the region of 4-8% in Jun-2008, to reductions of 5-13% in May-2009.

The worst affected airport, in terms of passenger traffic, has been Vienna International Airport, whose fortunes have changed significantly from being the fastest growing of the three European airports in Jun-2008, to having the strongest passenger reductions in the past eight months (between Oct-2008 and May-2009). 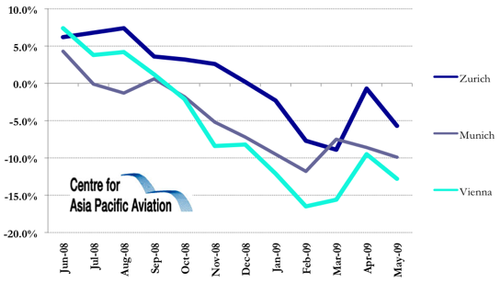 The airport's May-2009 passenger reduction of 12.8% resulted in volumes falling slightly below May-2007 levels, to 1.6 million passengers. By market, the largest reductions in passenger (scheduled and charter traffic) traffic were experienced to Eastern Europe (-17.3%), while traffic to the Middle East improved by 3.6% year-on-year. Flight movements were down 9.2% in May-2009, while maximum take-off weight declined by 8.0% and cargo was down 2.8% to 21,214 tonnes. Flughafen Wien's share's eased 0.4% yesterday.

Zurich Airport suffering from painful cargo contractions; but signs of improvement in May-2009

In terms of cargo traffic, Zurich Airport, which experienced cargo growth of around 10% in Jun/Jul-2008, has been the hardest hit of the three airports, with cargo volume contractions of over 20% in May-2009, significantly steeper than the reductions experienced by Vienna (-2.8%) and Munich (-8.3%). Zurich Airport's freight volumes entered negative territory in Oct-2008, later than Vienna and Munich (with prolonged year-on-year cargo reductions since Sep-2008 and Jun-2008, respectively). 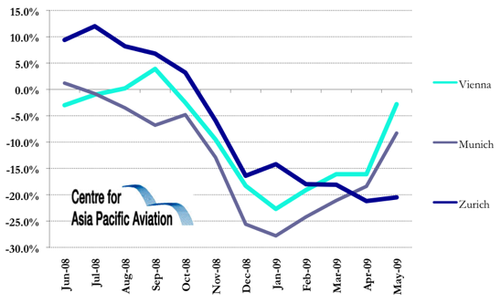 On a more positive note, May-2009 cargo figures show an improvement from Apr-2009 levels, with significant improvements experienced by both Munich and Vienna airports, and a stabilisation seen at Zurich Airport.

In other traffic news, seat load factor among all airlines at the airport was down 1.4% to 70.2%, while passengers per passenger aircraft movement increased slightly, by 0.2% to 96.7 passengers.

The weaker traffic figures have also had a negative effect on the airport's revenues, with turnover (net sales) per departing passenger falling 0.7% to EUR28.1. While airside turnover fell 7.8%, the airport reported an encouraging 8.7% improvement in landside turnover. A 6.3% reduction in F&B turnover was also experienced in the month, with the 2.6% increase in landside revenues being exceeded by a 13.0% reduction in airside revenues.

In terms of aircraft movements, Zurich, Vienna and Munich airports all saw reductions in the range of 8-9% in May-2009. 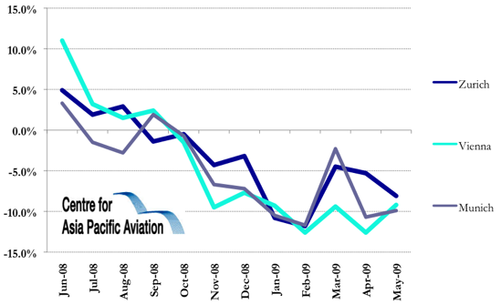 The airport's international passenger traffic fell 11.7% year-on-year in the month, to represent 72% of total passenger numbers, with domestic figures down 5.1%. On the cargo front, the airport saw a significant 36.1% reduction in full freighter services, while belly freight, which comprises 83% of commercial airfreight activity at the airport, was down by a lesser degree (-3.2% year-on-year).

Accordingly, the future prospects for Zurich, Vienna and Munich airports are heavily dependent on recovery among these carriers, which is unlikely this year, and future capacity arrangements between these secondary hubs should Austrian become a member of the Lufthansa Group. (The EC last week extended the deadline for its review from 17-Jun-09 to 01-Jul-09, due to concessions offered by Lufthansa in order to alleviate competition concerns).

Swiss CEO, Christopher Franz, recently stated that premium passenger and cargo demand has stabilised at "a very low levels", giving "good reason for substantial concern for the future of this business". He added that prospects of a recovery in 2009 were unlikely. Similarly, Lufthansa CEO, Wolfgang Mayrhuber, stated it would be an "achievement" to report a profit this year, given the current market conditions. The carrier expects a revenue reduction of approximately 20% in 2009, due to a decline in yields and a 10% reduction in passenger numbers. 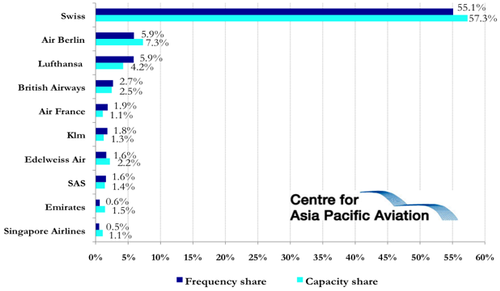 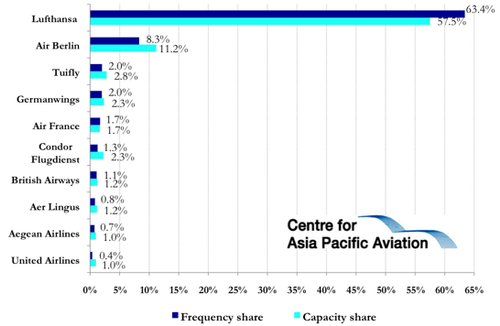 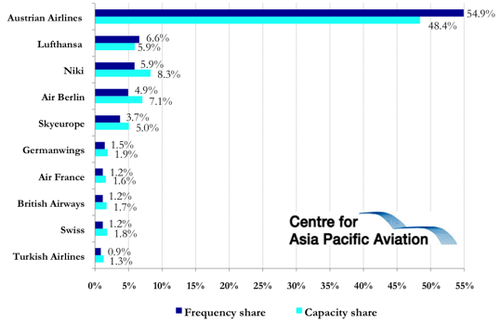