Reporting its first financial results since its Feb-2015 IPO, Wizz Air announced that its underlying net profit jumped by two thirds in FY2015. In another year of double digit capacity and revenue growth, it managed to grow its unit revenue while simultaneously lowering its unit cost.

Ranked by operating profit margin for the 12M period to Mar-2015, Wizz Air is equal second with easyJet and behind only Ryanair in the list of Europe's most profitable airlines. The IPO has also left it with a robust balance sheet, a useful attribute in the volatile airline industry.

Wizzair's underlying net profit was up 67%

The FY2015 net profit, operating profit and operating margin were Wizz Air's highest ever. Wizz Air's revenues grew at a compound average growth rate of 36% pa from FY2005 to FY2014 although this has "settled" to a relatively slower 22% pa since FY2010. After a period of losses and weak profitability, Wizz Air's FY2015 results have confirmed its status as one of Europe's more consistently profitable airlines since FY2012. 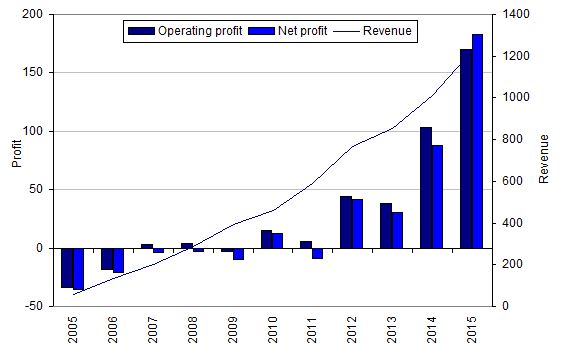 At 31-Mar-2015, Wizz Air had cash of EUR449 million, equivalent to 133 days of revenues, compared with EUR186 million at the end of FY2014. The increase was the result of Wizz Air's IPO in Feb-2015, which raised EUR149 million, and its free cash flow generation. Wizz Air has limited capital expenditure needs, since it finances aircraft using operating leases, but it previously was somewhat under-capitalised.

Wizz Air: growing at 15% annually, one of Europe's most profitable airlines "not desperate" for IPO 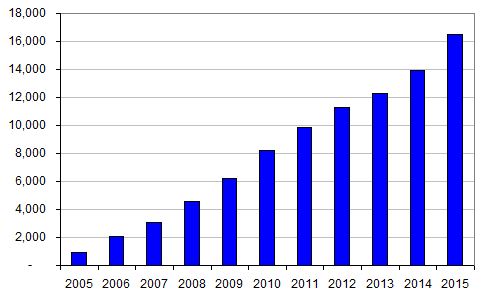 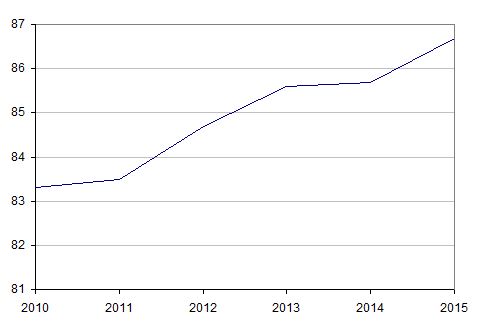 Revenue increased by 21%, slightly faster than the increase in ASKs, with ancillary revenue growing by 23%. Ancillary revenue was 35% of the total, a very high proportion by industry standards. Ancillary revenue per passenger grew by 3.7% in FY2015 to more than EUR26, which compares with EUR15 for Ryanair. This growth was driven by features such as Wizz Discount Club fees, multi-currency pricing and administration fees, while bag fees per passenger were stable.

Overall revenue per ASK (RASK) grew by 1.1% in FY2015. CFO Mike Powell told analysts at a presentation on the FY2015 results that Wizz Air aims to manage capacity growth so that it can maintain flat unit revenue (RASK). It has achieved RASK growth every year since FY2010, highlighting the strength of demand in its markets, the maturing of its route network and the success of its ancillary revenues.

Currency movements had a negative impact of c2.5ppts on RASK, according to Mr Powell.

Operating costs increased by 16%, less than the growth in capacity and revenue. This was helped by lower fuel prices, which led to fuel costs growing by only 10%. At 38% of the total, fuel remained the biggest cost item.

According to CAPA calculations, half of Wizz Air's annual increase in operating profit of EUR67 million can be attributed to an 8% reduction in its average fuel cost per ASK (including the impact of hedging, without which the reduction would have been greater).

The increase in ex fuel costs of 21% was in line with revenue growth and only just ahead of ASK growth. Cost per ASK (CASK) fell by 2.9% and ex fuel CASK increased by 0.3%.

Wizzair's fleet to increase to 88 aircraft in FY2018

This plan will see the average number of seats per aircraft grow from 180 in FY2015 to 194 in FY2018 and the proportion of winglet-equipped aircraft increase from 36% to 60% over the same period. This should enable Wizz Air to continue to grow its traffic and to achieve unit cost savings relative to its current fleet.

The fleet remains operating lease-funded, typically through sale and lease-back. Mr Powell told analysts that this method of financing was unlikely to change, since Wizz Air's analysis suggests that the overall cost of leasing is lower than ownership, particularly when taking account of the soft residual values of current-engine A320 family aircraft. 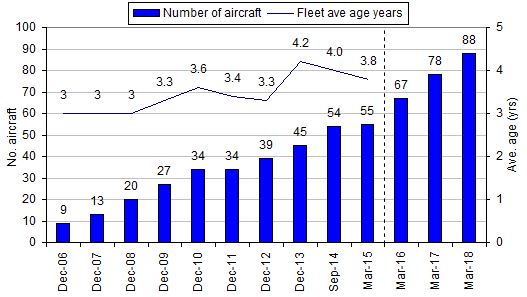 Wizz Air's FY2016 guidance expects that total CASK will be unchanged, in spite of a 1.5% fall in fuel CASK, mainly because currency movements are expected to push ex fuel CASK up by 1.0%.

Although CASK has fallen in FY2014 and FY2015, thanks to lower fuel, much of Wizz Air's profit improvement over the past five years has been due to RASK growth (see later). In turn, RASK growth has mainly been driven by ancillary revenues.

Indeed, although ticket RASK grew very slightly in FY2015, it has fallen 6% since FY2012. By contrast, ancillary RASK increased by 37% from FY2012 to FY2015. However, growth in ancillary RASK is slowing: it increased by only 2% in FY2015 after double digit growth rates in each of the previous four years.

Wizz Air has recently introduced features such as allocated seating, a "Plus Fare" bundled product and improvements to its mobile app. These initiatives may help to drive further ancillary revenue growth. Moreover, additional destinations in its network, combined with its strong share in the Central and Eastern Europe market, should ensure continued healthy demand for Wizz Air's product.

Nevertheless, in FY2016, the airline expects total RASK to fall at a low single digit percentage rate due to the pass through of lower fuel prices. The combination of lower RASK and flat CASK envisaged by Wizz Air's guidance suggests that operating profit will grow more slowly than revenue and that there will be a narrower operating margin in FY2016.

With ASK growth planned at 17%, its RASK guidance implies revenue growth of around 16%. Its underlying net profit target range of EUR165 million to EUR175 million would mean growth of 16% at the midpoint, which is faster than the operating profit growth implied by its guidance. Presumably, this would be the result of lower net finance and currency items.

Wizz Air has demonstrated strong control over ex fuel CASK in recent years. Having fallen by 42% from FY2005 to FY2010, ex fuel CASK is virtually unchanged since then. Over the past five years, changes in overall CASK have been almost entirely due to changes in fuel cost per ASK, which has fallen in each of the past two years. 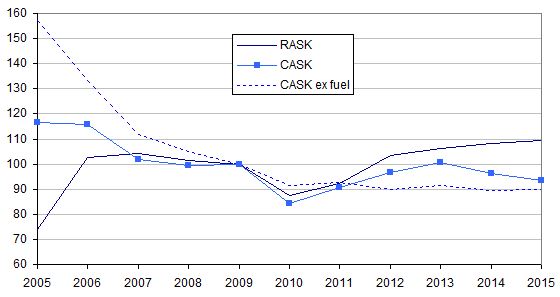 The flip side of this is that it is very difficult for Wizz Air to cut unit cost without a fall in fuel prices (and even then, as its FY2016 guidance demonstrates, it may not be possible to cut CASK). It already has the second lowest level of CASK in Europe, beaten only Ryanair.

As is the case for its Irish rival, it becomes progressively harder for Wizz Air to squeeze further cost efficiency improvements out of the business. Although both airlines have been pursuing RASK-led strategies to profit and margin growth recently, it is likely that CASK will continue to represent the yardstick for success for Europe's two lowest-cost LCCs.