Wizz Air: growing at 15% annually, one of Europe's most profitable airlines "not desperate" for IPO

Wizz Air CEO Josef Varadi told a recent meeting of the Aviation Club in London that he ran a very disciplined airline. "We never grow for growth's sake", he said, explaining that the airline had clear financial targets and that growth was an output from this process.

Earlier this year, Wizz Air pulled out of a planned initial public offering (IPO) of its shares, which would have seen it floated on the London Stock Exchange. Investor appetite was dulled by geopolitical issues, a fuel price spike and profit warnings from other airlines, rather than any problems at the airline itself. Indeed, its most recent accounts show that it is now one of Europe's most profitable airlines, with significant cash reserves. An IPO could come back onto the agenda, but, Mr Varadi said, "we are not desperate".

Its results have not always been strong in the 10 years since its 2004 launch, but our analysis of its accounts suggests that it is now on a firm footing, supporting Mr Varadi's claim that "financial performance is at the core of the airline – we are not doing it for charity".

When Wizz Air released its Intention to Float document in May-2014, CAPA published an analysis of its financial performance using the available data. The document did not include full details of Wizz Air's FY2014 results and so our analysis left some gaps.

Since then, the Group has filed its FY2014 financial statements with the Companies Registry of the Jersey Financial Services Commission (Wizz Air Holdings plc is a Jersey registered company). We have now reviewed these and so can fill in the gaps.

In FY2014, the Wizz Air Group grew revenues by 19% to more than EUR1 billion and achieved a 172% increase in operating profit to EUR104 million, with its operating margin gaining 5.3 ppts to 10.2%. Net profit almost trebled to EUR89 million.

Wizz Air's profit growth has not always tracked its revenue growth, but FY2014 was its best year, both in terms of absolute profit reported and in margin terms. It was also its fifth successive year of positive results at the EBIT level. 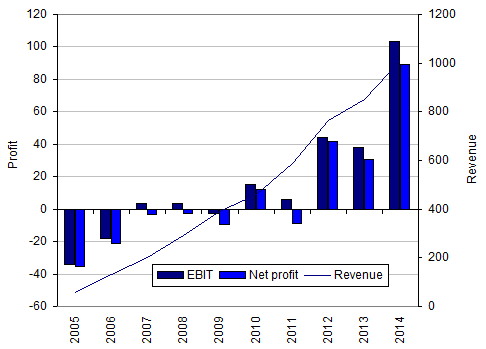 Wizz Air's margins compare well with others in Europe

Wizz Air's EBIT margin of 10.2% for the year to Mar-2014 compares very favourably with the average EBIT margin for full service carrier groups of around 3% in 2013. It is only in the middle of the pack among Europe's principal LCCs, lagging the EBIT margins of Ryanair, easyJet and Pegasus, but ahead of Vueling and Norwegian.

Wizz Air's margin at the EBITDAR level (earnings before interest, tax, depreciation and rentals on operating leases) led the pack for 2013 (based on results for each for the nearest financial year to calendar 2013).

An IPO remains a "strategic option", but balance sheet not in urgent need

The biggest omission from the Intention to Float document in May-2014 was balance sheet data for FY2014. We can now see from the recently filed annual report that the Group's total cash balance (including restricted cash) increased by 50% from Mar-2013 to Mar-2014 to reach EUR228 million, equivalent to 82 days of revenues, a very comfortable liquidity cushion. After subtracting debt (including convertible bonds), its net cash position was EUR171 million, compared with EUR94 million a year earlier.

While having a positive net cash figure on the balance sheet is rare among European airlines, this is due to Wizz Air's use of operating leases to finance its fleet. Adding capitalised operating leases at a rule of thumb eight times annual rentals, its adjusted net debt balance was EUR729 million at Mar-2014, almost stable on the EUR714 million figure of a year earlier. This was 3.0 times its EBITDAR figures, or 2.9 times if we treat the convertible bond as equity (the bonds mature in calendar 2014).

To make a comparison with Air France-KLM, which recently set a target to lower its adjusted net debt to EBITDAR ratio from 4.2x in 2013 to 2.5x in 2017, Wizz Air's balance sheet looks relatively comfortable. Air France-KLM capitalises operating leases at seven times annual rentals and, using this approach, Wizz Air's end 2013 ratio of adjusted net debt to EBITDAR was 2.6 times, or 2.4 times treating the convertible bond as equity.

Wizz Air's healthy liquidity and comfortable gearing ratios mean that there is no urgency to raise equity through an IPO. Nevertheless, it would increase its flexibility to finance aircraft through on-balance sheet financing and would also lower its operating costs. Mr Varadi said that Wizz Air was "keeping an eye on the situation" and would again consider an IPO, which he called a "strategic option", but he would not be drawn on the possible timing.

The Intention to Float document contained data on ex fuel CASK (cost per available seat km) for the past two years, enabling us to complete a decade of figures for this measure, but not on RASK and total CASK for both years. We can now complete all three sets of data (see chart below).

As previously observed, Wizz Air has managed to keep ex fuel CASK fairly stable over recent years, after cutting it by 41% from FY2005 to FY2010, it has remained in a narrow range since then (although it fell by 2% year on year in FY2014). Wizz Air has the second lowest CASK among European airlines (after Ryanair) and further significant cuts will be more challenging.

The greater variability of its total CASK compared with its ex fuel CASK suggests that Wizz Air does not engage in significant fuel hedging (its fuel CASK quite closely tracks jet fuel prices), but we do not have details of its policy in this area.

In spite of a creditable track record on unit costs, the more important driver of Wizz Air's profit recovery since its last operating loss in FY2009 has been its unit revenue performance. Since FY2009, Wizz Air's RASK (revenue per available seat km) has risen by 8.3%, while its CASK has dipped by 3.6%. That said, the strong margin improvement in FY2014 versus FY2013 was thanks to a 4.2% cut in CASK and a 2.0% increase in RASK. 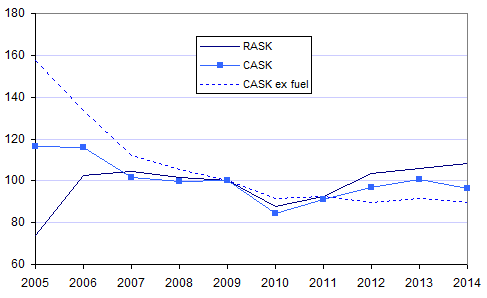 Wizz Air Group's fleet consists of 54 Airbus A320 aircraft (including two at Wizz Air Ukraine, as of 18-Sep-2014, according to the CAPA Fleet Database). The Group's balance sheet contained no aircraft assets at 31-Mar-2014, reflecting Wizz's focus on off-balance sheet operating leases. The average age of the fleet is 4.0 years, among the youngest of any significant airline in Europe.

According to CFO Mike Powell, Wizz Air selected the A321 rather than the A320neo on the basis of the aircraft’s lower price; as he was quoted in Air Finance Journal, 15-Sep-2014: “We think we are getting the economics of a neo without paying a neo price”. The additional seats should mean unit costs that are 7% to 8% below the A320 level, although there may also be some erosion of yield if, as Mr Varadi said at the Aviation Club, "overall capacity is more important than frequency".

The Intention to Float document said that it plans to grow the fleet to 82 aircraft by the end of 2017, implying an average growth rate of 16% pa for the calendar years 2014 to 2017. Passenger growth has roughly tracked fleet growth in the past, but deliveries of the larger A321 aircraft from 2022 give it greater flexibility over passenger growth in the longer term.

Planned growth is to continue at about 15% pa

Planned growth in the fleet reflects Wizz Air's perception of the opportunities presented, partly as a result of many Central/Eastern European national carriers' struggles with their profitability. The restructuring of such airlines typically involves capacity cuts, leading Wizz Air CEO Josef Varadi to say: “These airlines either disappear, or merge, or shrink a lot from their current size. Either way that means opportunity for Wizz Air”, adding that he expected to maintain an annual growth rate of about 15%.

Relative to Western Europe, Central/Eastern Europe offers superior economic growth and the opportunity to raise the penetration of air travel from lower levels (in addition to some weak national airlines).

Wizz Air commenced as the sole operator on Riga-Dortmund in Aug-2014 and plans three more new routes from the Latvian capital in 2015, adding a second aircraft to its base there. It will also add three new routes at Vilnius in Lithuania. It also plans to increase its capacity in Poland by 25% and to launch new routes in Romania and Hungary in 2015.

In Poland, Wizz Air will launch eight new routes from Warsaw Chopin Airport and increase frequencies on eight routes, adding a fifth aircraft to the base. On five of the eight new routes, Wizz Air will be the sole operator, while on one route, to Alicante, Ryanair also operates on the city pair (albeit from Warsaw Modlin). Also in Poland, at Katowice and Poznan it will add five new routes (as the sole operator), increase frequencies on 21 routes and base an additional aircraft at both bases. Its plans will bring to 18 the total number of aircraft based in Poland.

In Romania, there will be three new routes from Bucharest and three from Iasi in 2015. It will be the sole operator on three of the new routes, while TAROM will be its only competitor on the other three (according to OAG data). In Hungary, it will base a ninth aircraft and launch two new routes from Budapest (one as sole operator), in addition to adding frequencies to its 11 existing routes, to give 15% growth in 2015.

Wizz Air will need to keep its focus on costs, with Ryanair breathing down its neck

Although much of Wizz Air's 2015 growth plans also avoid direct competition from Ryanair (or, indeed, any other airline), it seems inevitable that the two will encounter each other more frequently as time passes.

Ryanair has the lowest unit costs of any European airline and, given its strength in Western Europe, a superior network on a pan-European basis to that of Wizz Air.