Australia is fortunate in being able to boast perhaps the most efficient and best managed airline in the world. Qantas is by many measures a leader – in establishing the highly successful dual brand, with Jetstar, in its international strategy, an unmatched frequent flyer programme and data aggregation capability, a powerful distribution strategy….the list goes on. And it has a remarkably strong balance sheet, with provisions made to weather a long storm.

Qantas also dominates the Australian domestic air services market at all levels, owning more than two thirds of it, and much more in some pockets.

That includes regional markets, tourism markets and, above all the almost AUD10 billion corporate market, where it holds about a 90% share.

Internationally it also has a selection of valuable routes, such as the US, as well as very strong airline partnerships.

In those circumstances, does Australia need a strong second airline? Should Virgin Australia be bailed out?

Virgin Australia is unlikely to survive six months, without support. Why not let it fail? It’s happened before.

There is a precedent for allowing a major airline to fail.

The Howard government bravely – and rightly – allowed Ansett to collapse in Sep-2001; in various forms (“Tesna”) it lingered around for a while, as some opportunist investors sought to revive it so they could get their hands on Ansett’s very valuable real estate assets, mostly terminals at Australia’s main airports. Fairly quickly it exited completely.

The decision to let the airline fail was right at that time, because Ansett had proven for almost a decade that it was incapable of adjusting to a deregulated market. It started the 1990s with half of the domestic market and slid downhill for the next decade, as a privatised Qantas progressively came to dominate. In short, it was a basket case that successive CEOs had tried to turn around and failed to do.

But those were very different times

Also, there was a wind of change in the market, as low cost carriers, LCCs, entered, with an efficient new business model and the ability to offer low fares.

One of them, Virgin Australia (then Virgin Blue), survived – although only just. The other, Impulse, was bought out by Qantas, just before it collapsed.

It was a time of strong economic conditions, in the boom years leading up to the GFC. And from zero market share Virgin was fairly quickly able to grow, completely disrupting the low fare market, creating a whole new type of traveller.

In 2002 when Ansett finally disappeared, despite its now-massive market share, Qantas was still fat and inefficient; it couldn’t compete with this new low cost model. When it entered in 2004 Qantas’ new LCC Jetstar quickly slowed Virgin’s relentless expansion.

Even then, though economic conditions were perfect and a new low cost airline model was able to stimulate a whole new category of traveller, it took years to get back to long term market growth rates. 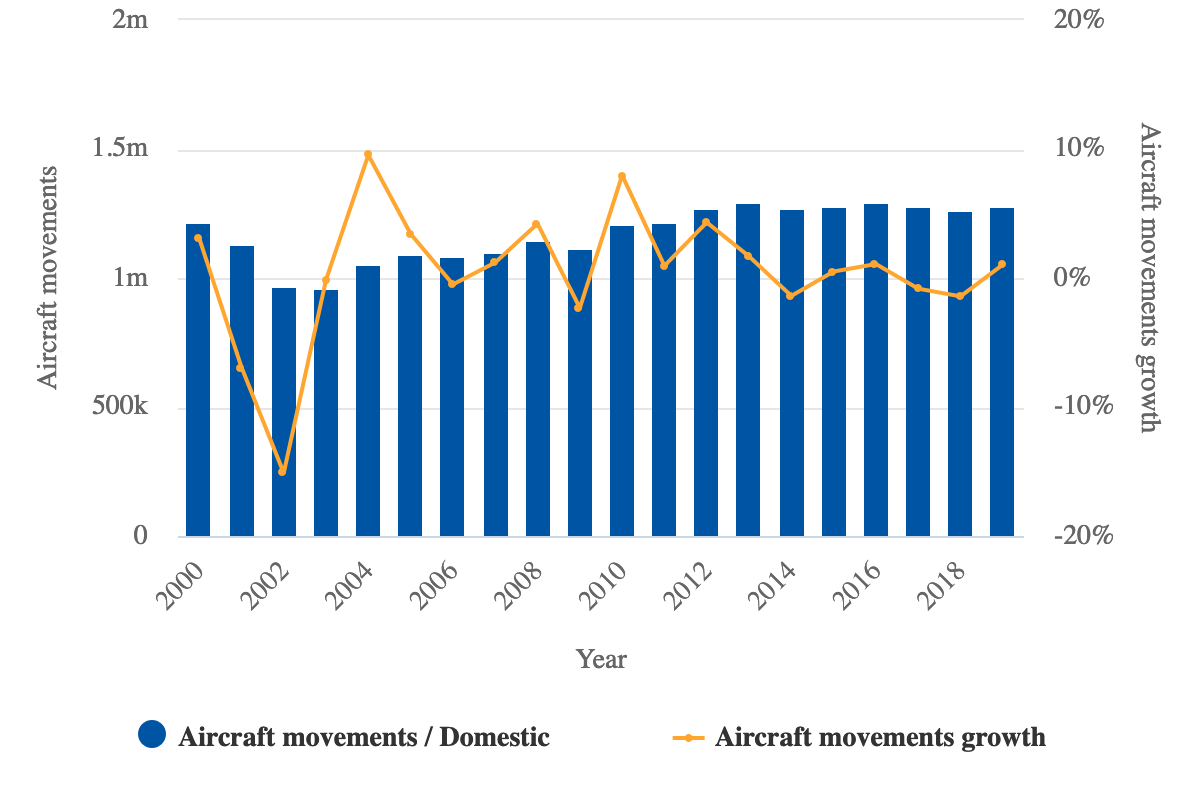 And passenger numbers also took a long time to recover, despite the strong economy post-2000 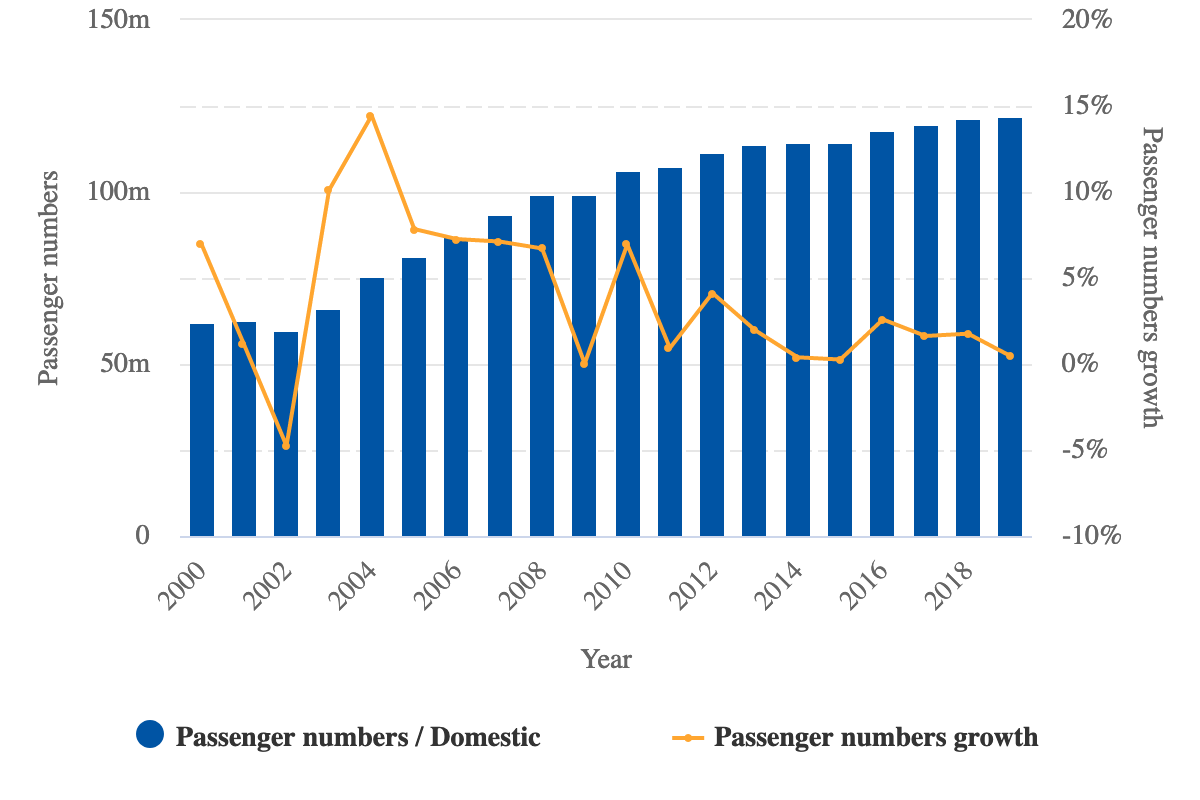 Virgin Australia is another matter, and these are (very!) different times

A government bailout for one airline competitor in the system is not a desirable situation. Nor for that matter is coronavirus.

When we emerge from this social, medical and economic disaster, with perhaps 15-20% unemployment, do we really want a single monopoly airline?

To suggest another airline – or several airlines – will want to enter comprehensively in those conditions defies credibiilty.

And, if new investors did want to establish a new airline, how would the government then go about picking winners?

Would a full service airline, much more susceptible to blanket competition by Qantas, be preferred over an LCC? Because, with the scarcity of slots at Sydney, there is no way two airlines could get sufficient access to make them competitive. They’d be sitting targets.

And, in the months-long period it takes for a new airline to be authorised to fly, there would be a hiatus, as Qantas consolidated its position.

Meanwhile a functioning airline with 10,000 direct employees and many more reliant on its activity would have disappeared.

Hopefully, in its deliberations, the government is planning for these obstacles.

Virgin Australia certainly has some substantial airlines as large minority shareholders on its registry. They are there because the Australian market is very important to them. Surely they should be the ones to support Virgin Australia in its hour of need?

After all, Singapore Airlines itself has just received a huge leg-up from its mostly government owners.

That does overlook the simple fact that this storm isn’t all plain sailing for them either, even if both airlines are largely government owned. (The other major shareholders are Chinese investors, and presumably if Huawei is not acceptable to this administration, neither would a Chinese owned airline be.)

But, if the Australian government is relying on that to happen, hopefully there is someone engaged in sensitive government to government talks with two of our very close allies – Singapore and the UAE.

If that is not the case, arguing the cause through the media, with the implied threat that their investments will go down the tube, is not where Australia wants to be – either from a practical or a diplomatic angle. And it’s highly unlikely to achieve the optimum outcome.

Australia needs functioning, full service airline competition when we emerge from this tragedy

That is simply not going to happen if Virgin Australia disappears in the next few months.

Obviously establishing a replacement airline in what will be extremely troubled times, in say 2021, is a difficult and time consuming process, with comprehensive safety hurdles to jump over.

It would be quicker if it were Singapore Airlines or even Air New Zealand who entered – both have longstanding aspirations to do that – but even for them the process of reconstitution would be time consuming. It would also imply that 10,000 perfectly valuable airline employees and more would meanwhile have been unemployed for a matter of months.

Australia needs a full service airline – just as it always has – to provide competition on major routes and regional services, to cater to the corporate market across the spectrum, to allow for competition on such fragile key tourism markets as the far north of Queensland, as well as to be able to offer an international alternative.

In a time of such enormous upheaval it is understandable that governments are preoccupied with the sheer weight of confronting the health challenges of coronavirus and an impending deep recession.

But decisions are being taken now on the run that will irreversibly reshape the long term profile of Australia’s aviation.

Aviation has become so important to Australia and Australians that uncertainty about this key socio-economic driver – which underpins tourism, doing business and bringing remote regions into the fold – that this issue demands a little more long term thinking.

Even the biggest aviation nation in the world, the US, is being asked to consider urgently establishing a government supported emergency national air service – because “the airlines are the only glue holding the country together”.