When no bad news is good news: Boeing announces details of B787 schedule

Boeing released news of its test flight and delivery schedule for the B787 yesterday, sending its share price soaring more than 10%, before finishing the day up 8.4%.

The announcement contains few, if any surprises, either positive or negative. The first B787 is “expected by the end of 2009”, much in line with general expectations, with the first delivery “expected to occur in the fourth quarter of 2010”, again matching general expectations since the Jun-2009 delay announcement. The suitably vague language of the announcement gives Boeing several months of wiggle room to ensure all is right with the aircraft.

The chief reason for the test flight delay is a need to reinforce the wing to side-of-body join in the aircraft, after flex testing revealed higher than expected stress levels in areas where the wing joins with the fuselage. The fix for this has now completed initial testing and Boeing is “finalising design details of new fittings that are expected to ensure full structural integrity of the joint”. The first B787 test model and the static test airframe will have the fix installed in the next few weeks.

The new schedule also accounts for an addition of several weeks of “schedule margin” to reduce flight test and certification risk. If the FAA finds fault with something, Boeing can have another run at it.

Airline reaction has not been as positive as investor reaction, or at least they are not breathing the same sigh of relief. Launch customer, All Nippon Airways, has re-expressed its understandable dismay and frustration at the delays in the programme. At one stage, the carrier had been hoping to showcase the aircraft on operations between China and Japan for last year’s Beijing Summer Olympics and the B787-3, which it had planned for use in high density markets, has already been indefinitely delayed.

Similarly, Australian carrier Qantas, which had bet on the aircraft for its low cost subsidiary, Jetstar, stated the announcement was “frustrating news, but not unexpected”. Qantas has since cancelled the first 15 B787-8s and recently ordered more A330s for Jetstar.

Virgin Atlantic stated it was “very disappointed at this latest setback to Boeing's 787 programme and await to hear what implications this will have for our first deliveries.” It has already announced plans to lease A330s, an aircraft which has been selling well over the past 18 months, to compensate for the delays.

In the Indian press, Air India is rumoured to be seeking a staggering USD700 million in compensation for the two-and-a-half year delay. Earlier in the year, the carrier stated it expected its first deliveries in Jun-2010.

Commercially, Boeing still expects to make a profit on the aircraft, although any hiccups in certification or flight testing may still push the programme past the threshold. The company expects to take a pre-tax hit of USD2.5 billion against its 3Q2009 results, after reclassifying costs for the three flight-test aircraft from programme inventory to an R&D expense.

Even after losing 60 orders this year, there are 850 B787s on firm order (and another 300 options), approximately 6-7 years worth of production (assuming Boeing manages to hit its target of producing ten aircraft a month by 2013). By comparison, Boeing churns out its current B777 widebody at the rate of 6-7 aircraft per month, and its B737 narrowbody at about 28 per month.

Boeing is already looking at establishing a second production line for the aircraft, potentially outside Washington State. Given the ongoing feud between Boeing management and the unions at Boeing’s Everett facility, the newly acquired South Carolina facility, acquired from Vought for around USD1 billion last month, is an attractive option, and a potential lever for union negotiations. An announcement on the location of the second line is expected around the same time the first B787 takes off, hopefully at the end of the year. 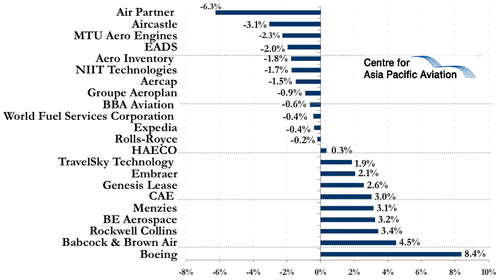